AFTER Eugen Onegin, the Slovak National Theatre (SND) continues its Russian focus with its recent premiere of another piece by Russian composer Peter Ilyich Tchaikovsky, the Queen of Spades. Based on a short story by A.S. Pushkin, it was made into an operatic libretto by the composer’s brother, Modest I. Tchaikovsky. 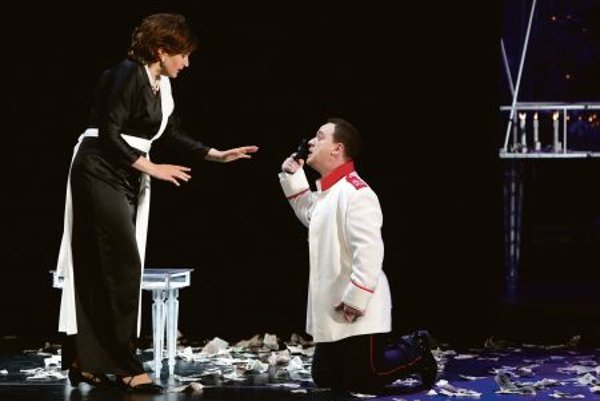 AFTER Eugen Onegin, the Slovak National Theatre (SND) continues its Russian focus with its recent premiere of another piece by Russian composer Peter Ilyich Tchaikovsky, the Queen of Spades. Based on a short story by A.S. Pushkin, it was made into an operatic libretto by the composer’s brother, Modest I. Tchaikovsky.

Unlike the classical Italian operas of that time, this piece is neither a heroic historical opera nor comedic, light entertainment, as music theoretician Jaroslav Blaho discussed with the opera’s director, Marián Chudovský, who is also the general manager of the SND. The Tchaikovskys focused on the love story (with a tragic ending) between the main hero, Hermann, and Lisa, the foster daughter of an old countess. Pushkin explored the social background and the themes of crime that led Hermann to kill the countess, who refused to tell him the secret of the three cards that could make him instantly wealthy, if he dared to risk enough in a card game.

The opera, while also describing the rich social life of that era (though made more universal for the contemporary audience), shows more graphically the individual desires and ambitions of a soul plagued by greed, envy and a resolve to acquire wealth and become part of high society. This, Blaho concluded in a matinee preceding the premiere of the opera, can offer a deeper lesson from the story of a determined and desperate gambler who refused to wait until he earns enough money through honest work, and preferred an easy, attractive life of luxury and gaming instead. His urge to win the fortune was initially motivated by his love of Lisa and a wish to improve his social status by marrying her, but later became an obsession in which the original impetus is lost.

“Pushkin’s story in Tchaikovsky’s perception is for me one big phantasmagoria,” Chudovský confessed in the Portal magazine, published by the SND. “… A depressive story in which the dark instincts of human passions are shown.… Fantasy overlaps with reality, and one does not know anymore what is possible and what is impossible. The impossible becomes reality, and reality is just some kind of peculiar dream…. A mirror labyrinth in which we look into our own face, often caricatured or deformed. We stray, imprisoned in our own cage, and we cannot find a real way out….”

This perception is reflected in the minimalist stage design that consists mostly of mirrors hanging from the ceiling, only changing in opulent scenes outlining the feasts and partying of the period high society. Jaroslav Valek did the stage design, while the neutral costumes, symbolic rather than typical for that period, are the work of Peter Čanecký.

The next re-run of The Queen of Spades is on June 13 and 20, the former within the Eurokontext.sk theatre festival. More performances are planned for the next 2014/2015 season.

Although the romantic opera depicting the ups and downs of tsarist Russia and its noble elite was premiered in 1890, its message resonates with audiences of 21st century, too. And the harmonic music with its remarkable arias is no insignificant bonus, either.