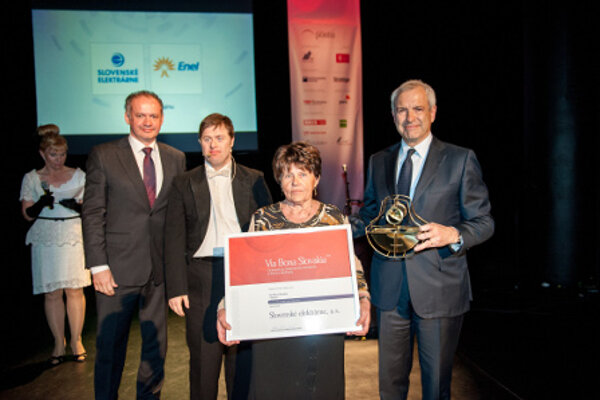 Slovenské elektrárne received the main prize of the prestigious VIA BONA awards, the “Responsible Large Corporation of 2013” for its social responsibility programme “Energy for the Country”.
Font size:A-|A+0

Slovenské elektrárne considers its primary social responsibility to produce electric power safely and responsibly in an environmentally friendly way at competitive prices. Constant improvements to production processes and the use of the best technologies available serve as the basis for running an environmentally conscious company. In 2013, Slovenské elektrárne produced as much as 90 percent of its power without emissions, a fact that has ranked it among the top energy companies in Europe.
Yet, the company is involved in a number of activities in different areas of society that far surpass the business of energy production. Many of Slovenské elektrárne’s philanthropic projects focus on challenging topics that pertain to demanding and socially crucial areas, which nevertheless do not frequently make it to the centre of attention of corporate social responsibility programmes.
After years of CSR involvement, Slovenské elektrárne received the main prize of the prestigious VIA BONA awards, the “Responsible Large Corporation of 2013” for its social responsibility programme “Energy for the Country”.
“This award belongs to all employees of SE who are engaged every day in supporting local communities around our power plants,” said former Chairman of the Board and ex-GM of Slovenské elektrárne Mr Paolo Ruzzini after he received the prize from the hands of Slovak President-elect Andrej Kiska.
Though this was the first time the main prize went to Slovenské elektrárne, the company received an award in the category “Long-Term Positive Influence on Community” the previous year for its project focusing on the homeless, specifically for its help with the St Vincent De Paul doss house in Bratislava.

Energy for the Country

Since 2008, Slovenské elektrárne has supported numerous projects within its Energy for the Country CSR programme. The programme itself covers five major areas, with Energy for Life focusing on charity and philanthropic activities; Energy for Nature on environmental protection and biodiversity preservation and Energy for Education is involved in the support and development of education. Energy for Culture supports the development and protection of cultural values, while Energy for Sport focuses on disease prevention, healthcare and the development of sporting activities.
Within the Energy for the Country programme, Slovenské elektrárne cooperates with a number of partners and institutions to support projects at both the national and regional level.
Nevertheless, Slovenské elektrárne was nominated for the main award not only for the financial and non-financial support it provides to peer projects, but also for its commitment to minimising environmental impacts, its services for employees, its positive influence on local communities as well as its attention to the safety of its employees. Slovenské elektrárne is also one of the founding members of the Fund for a Transparent Slovakia.

Arnold the Eagle – our Energy for Nature

The most famous projects include the environmental sustainability of mountain chalets, the development of educational nature trails and cycling routes, and especially cooperation with the Tatra National Park (TANAP) in a project of biodiversity sustainability through saving endangered fauna species. The most popular of these is, undoubtedly, the monitoring of a male lesser-spotted eagle of the High Tatras, now already a popular celebrity, called Arnold, who returned to his home in Slovakia after having crossed 7,000 kilometres and 16 countries from his winter grounds in Africa.

Outside the limelight – Energy for Life

A typical example of Slovenské elektrárne’s approach is solving issues on the margins of public interest. For example, the Energy for Life programme has tackled the issue of homelessness. It is crucial not only to secure the financial needs of the homeless, but also to contribute to a systematic solution to the problem, as well as to increase the sensitivity of public opinion. Equally innovative is a project focused on financial and non-financial support for the development of low-cost housing for the Roma minority in the municipality of Kojatice. By combining architectural, social and legal assistance, the project also boosts cooperation between local governments and organisations working with socially excluded communities.

Slovenské elektrárne has been developing cooperation with schools and universities to inspire interest among young talents not only in studying technology at colleges and universities, but also in working in the energy sector. Each year the company allocates the Aurel Stodola awards and provides financial gifts for the best Bachelor’s, Master’s and post-graduate theses focused on energy. Slovenské elektrárne, within its long-term programmes of collaboration with academia, e.g. in Slovakia with the Slovak Academy of Sciences (SAV), the Slovak University of Technology, and foreign and specialised institutions, tries to support scientific development in the sphere of energy.

Slovenské elektrárne has been involved in supporting cultural events and various genres of art, music (classical – Zlaté husle, jazz – Bratislava Jazz Days, folklore – Folklore Festival Východná) theatre (Andrej Bagar Theatre in Nitra, Radošina Naive Theatre, Virtual Theatre in Trenčín) to less traditional forms of art like the Kremnica Gagy festival of humour and satire. The company also supports the spread of Italian culture and traditions in Slovakia through the Dolce Vitaj festival. An important project, literally the most visible in the Žilina region, is providing new lighting for Orava Castle, made possible by Slovenské elektrárne in cooperation with Žilina Region.

Sport without barriers – Energy for Sport

Back in 2011, the company supported the Days of Sport without Barriers, thanks to inspiration from Slovenské elektrárne’s mother company, Enel, which supports National Paralympics Day in Italy. Slovenské elektrárne has been supporting the Tour of Slovakia cycle race as an excellent way to present the beauty of Slovakia. The event Energy on Wheels is for the first time this year part of the tour, and the wider public can cycle from Gabčíkovo to Bratislava on the same day and route as the peloton with professional cyclists.