LESS than a dozen of 150 parliamentary deputies listened to Ombudswoman Jana Dubovcová present her annual report on June 10. As she discussed the state of human rights in Slovakia for nearly one hour, Dubovcová spoke to a near empty discussion hall that only began to fill, according to reports by the Sme daily, when a scheduled vote on the report approached. It was approved. 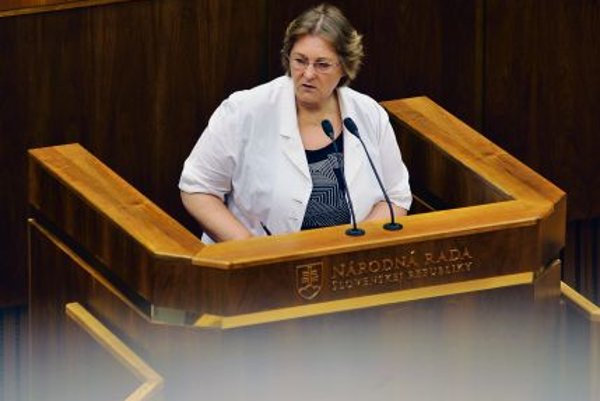 LESS than a dozen of 150 parliamentary deputies listened to Ombudswoman Jana Dubovcová present her annual report on June 10. As she discussed the state of human rights in Slovakia for nearly one hour, Dubovcová spoke to a near empty discussion hall that only began to fill, according to reports by the Sme daily, when a scheduled vote on the report approached. It was approved.

“This is the working method of the Slovak parliament,” Dubovcová said, as quoted by Sme.

The experience, however, is nothing new for the ombudswoman, who has tried in vain to get the government to discuss her report, which points to serious violations of human rights by state bodies in its policy toward Roma, including the controversial and violent police raid in a Roma settlement near Moldava nad Bodvou.

Meanwhile, a global organisation of human rights guarantors is expressing concerns that Dubovcová’s work is being undermined.

“I urge you to address the situation as quickly as possible and thus confirm that the Slovak parliament promotes democracy, human rights and the rule of law,” European Board of the International Ombudsman Institute (IOI) President Peter Tyndall wrote in a letter addressed to Speaker of Parliament Pavol Paška and provided by Dubovcová’s office to the SITA newswire.

The organisation, with 160 members in 90 countries, suggests that undermining the work of any ombudsperson is understood internationally as evidence of a lack of respect for citizens’ rights.

Dubovcová in her annual report warned about the problem of malnourished children in reform centres and boarding schools and called on parliament to address the violation of the rights of these children. She also noted that the violation of children’s rights appears as a systemic failure, SITA reported.

Dubovcová had already warned about malnourished children in reform centres in May, based on a survey conducted in these facilities suggesting that breakfast for children aged 6-11 costs €0.33, while a whole-day meal costs €2.28 per day. Food for 18 year olds costs €2.69 per day. To demonstrate that the state financing of food for children in these facilities is insufficient, Dubovcová brought a sample of the daily menu to MPs on the parliamentary committee for education.

She also noted that these centres use dubious methods, such as gynaecological checkups of girls each time they leave the institution or shaving children’s head regardless of their age as a hygienic precaution, SITA reported.

Roma children made up the majority in most schools for children with special needs that she visited, Dubovcová noted in her report, adding that most of these children face language barriers and did not attend pre-school.

Parliament has requested the government to address the issue of the headquarters of Dubovcová’s office, which is now in rented premises, not a state-owned building.

The US Embassy in Bratislava however has noticed Dubovcová’s efforts and presented her with the Human Rights Defender Award on April 2 in recognition for “her efforts to defend and promote the rights of all Slovak citizens, and to ensure those rights are recognised and upheld by all relevant institutions throughout Slovakia”, according to an April memo sent to The Slovak Spectator.

Instead of seriously dealing with Dubovcová’s reports, state officials have shown a habit of accusing her of violating the law and mixing politics with her human rights agenda. At a specially summoned session of parliament on January 30, which featured what some have termed hate speech by a high-level Smer official, deputies of the ruling party rejected a resolution drafted by the opposition condemning the government’s treatment of Dubovcová.

Then, in a vote orchestrated by the ruling Smer, deputies expressed concerns over what Smer called an abuse of the issue to stir anti-Roma and anti-police sentiments, with the speaker of parliament proposing to move Dubovcová’s office out of Bratislava to the eastern part of the country.

When speaking to the press on June 10, Dubovcová noted that her recommendations pertaining to last year’s controversial police raid in Moldava nad Bodvou have not been carried out, the TASR newswire reported.

Since last summer, international groups have confronted Slovakia over the controversial police raid.
The Roma settlement informally named Budulovská was raided by 63 police officers on June 19, 2013. They were purportedly seeking seven men for which they had arrest warrants. They found none of those men, but violence ensued and 15 other Roma were taken to the police station.

While police allege they were attacked upon entering the settlement, none of the 15 detained were ever charged with a crime resulting from the clash. Several of the Roma were injured. An NGO active in the settlement, ETP Slovensko, documented the injuries with photographs.

After Dubovcová tried to draw the government’s attention to the raid, Interior Minister Robert Kaliňák accused her of lying, threatening police officers and harassing the government on political grounds.

Although the ministry’s first investigation of the raid found nothing wrong when assessing the incident, a subsequent independent probe resulted in the launch of a criminal prosecution over four acts: the abuse of powers of a public official, the violation of privacy, stirring mayhem and the crime of torture and other inhumane or cruel treatment.