IN HIS exit speech, President Ivan Gašparovič listed successes and nearly a dozen issues he said that Slovakia is dealing with. While no mistakes or regrets were noted, there were some parting shots at what he called a politicised media. 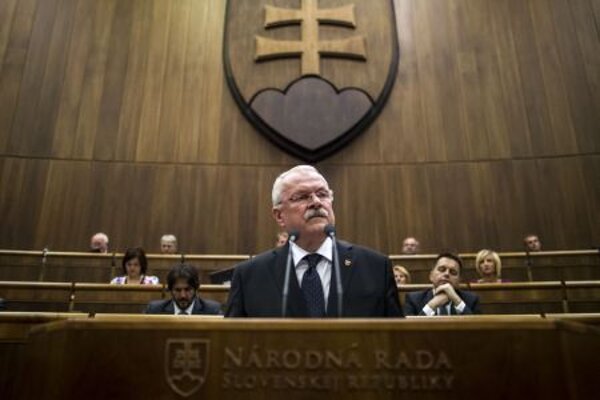 IN HIS exit speech, President Ivan Gašparovič listed successes and nearly a dozen issues he said that Slovakia is dealing with. While no mistakes or regrets were noted, there were some parting shots at what he called a politicised media.

Gašparovič said goodbye to the government in his official seat in Grassalkovich Palace on June 11. During the ceremony the organisers failed to play the prepared festive music and Gašparovič said in response that his farewell to the prime minister and the cabinet need not be official. He pushed the microphone away and approached the assembled politicians, saying that he will miss them, according to the Sme daily.

That same day, Gašparovič visited parliament to comment on the state of the Slovak Republic and review his 10 years as president.

“It was an honour to be the head of state in a period which we consider, despite the financial and economic crisis, the most successful in the modern history of Slovakia,” Gašparovič said.
While Smer politicians praised the speech, opposition MPs described it as uninteresting.
SUB: Listing problems

Gašparovič began his finale with his campaign credo: “I think nationally and feel socially.” He added that as president he saw the function as a mediator, not a judge. During his 10 years in the position, he successfully cooperated with four governments and parliaments, experiencing two early falls in February 2006 and October 2011, he said.

Gašparovič mentioned the criticism he received for his unwillingness to appoint general prosecutor-elect Jozef Čentéš to the post, stating he still believes that the decision was right.

After listing the successes of his tenure, Gašparovič focused on the problems of the country. He pointed to extremist statements which have started to become part of mainstream politics and poor food independence, which is partly caused by EU agriculture politics, he said.

“A long-term solution to social problems on the part of the Roma communities ... can only be attained as a two-way process,” he added.

The key problems of Slovak society are high long-term unemployment rates and economic polarisation, Gašparovič said, adding that families and the institution of marriage are also under pressure.

“New forms of cohabitation will have to provide arguments about their relevance,” Gašparovič said, “referring not only to the important criteria of the personal freedom of two partners, but also to the criteria of children’s future and the reproduction of mankind.”

The public is more and more controlled by economic powers and media, he stressed. Media are largely a politicised manipulator of information which results in situation when people are poorly informed and there are decreasing number of them participate on elections, he stated.

Lack of self criticism

Mostly Smer MPs applauded in the end of speech. Speaker of Parliament Pavol Paška praised the President’s opinion on traditional family and told him that cabinet will always appreciate his advice, Sme reported.

“It is not important whether the speech contains new thought,” Smer MP Dušan Jarjabek said, as quoted by Sme, “the important thing is that Mr President sees problems as most of us and he is not far from reality.”

On the other hand, Pavol Zajac, the chairman of the Christian Democratic Movement (KDH) caucus said that Gašparovič should do more to solve the problems he listed if he sees himself as mediator.

Martin Poliačik of Freedom and Solidarity (SaS) party criticised the lack of self-criticism in speech.

“Mr President forgot to tell that he was co-creator of many current problems and I did not see even the indication of self reflection, what he could do better,” Poliačik said, as quoted by Sme.