FOR the first time in Slovakia’s 20-plus-year-long history the country is getting a political greenhorn for a president. Yet, Andrej Kiska raises high hopes among the population and observers as he succeeds Ivan Gašparovič in the presidential chair. 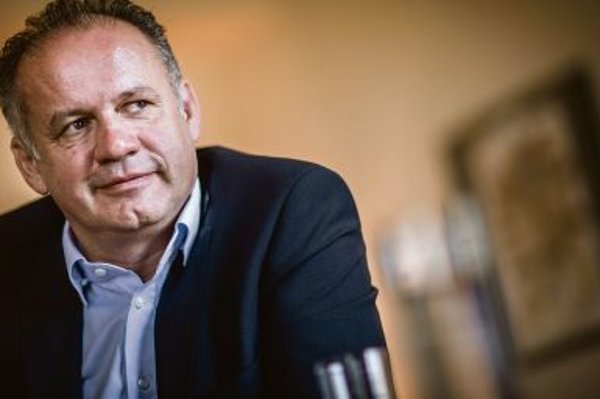 FOR the first time in Slovakia’s 20-plus-year-long history the country is getting a political greenhorn for a president. Yet, Andrej Kiska raises high hopes among the population and observers as he succeeds Ivan Gašparovič in the presidential chair.

“The credit of trust [he received in the election] is very high,” political analyst Grigorij Mesežnikov told The Slovak Spectator, noting that no non-partisan candidate has ever managed to outnumber the most popular politician in the country by 19 percent, as Kiska did in the run-off of the presidential election against Prime Minister Robert Fico.

Kiska might not have any political experience, but he definitely possesses other kinds of experience and qualities that might help him to become a good president, observers believe. Besides, the first-ever non-political president can finally make sense of the direct election of the president in the country. The public’s expectations for Kiska are high as he promises to open up the office to the problems of ordinary people, make changes that fall within his power and possibly improve things in various areas of state administration, particularly the judiciary.

“I consider the most important [priority] to return authority and trust to the presidential office,” Kiska told The Slovak Spectator as a presidential candidate. “People must feel that the president is standing behind them; that it is a person who will stand behind them and would urge the government and parliament when they do not fulfil their duties towards the citizens.”

Kiska claims he has been preparing intensively for the country’s top post. The judiciary is set to be his priority, which falls under the presidential powers. He has already announced that in the first week of his presidency he will hold a press conference concerning all the steps he is planning to take in this area.

“There are many problems waiting for me right at the start – the judiciary, the constitutional judges, the unfinished election of the Supreme Court president,” Kiska said in an interview with the SITA newswire.

Kiska’s lack of experience in politics should not prove to be problematic for him in the presidential office, as it is easy to overcome, analysts agree. On the contrary, the fact that he has no background in a political party is an advantage for a president who wants to avoid being biased, Mesežnikov said.

“I presume that as a man who was successful as a top manager, he can easily gain experience and use his qualities,” Mesežnikov told The Slovak Spectator, adding that Kiska’s public statements before and after the election suggest that he is familiar with society’s main problems and the country’s foreign policy, and is pro-democratic.

The advantage of Kiska entering the office without any political bias is that he can create his own line, without being constrained in any way by some political past, political analyst Miroslav Kusý said. That way, he can bring a breath of fresh air to the Slovak political scene, even though this is not exactly what happened with all non-partisans who appeared on the Slovak political scene in recent history. Kusý mentioned Igor Matovič, the leader of the Ordinary People and Independent Personalities movement, who entered parliament like “a loose cannon”.

“But Kiska is not the type, based on what we’ve seen so far,” Kusý opined. “He is a judicious man who seems to have very clear ideas about the way he wants to work, and those ideas seem positive for the public.”

All the president’s men

On the other hand, the lack of political background could prove to be a handicap, Kusý conceded, as in the presidential office, experience in both domestic and foreign politics are somewhat expected. If that should turn out to be a weakness, Kiska can turn it into a strength if he puts together a solid team of experts.

“As did Václav Havel, who also had no political experience; but he surrounded himself with people with a name among the public, both domestic and global,” Kusý told The Slovak Spectator.
Observers generally agree that Kiska’s performance will depend on the quality of the team he chooses.

“Fortunately, thanks to the fact that I’m not a candidate of any political party, there are no pressures behind me forcing me to accept or place anyone,” Kiska told SITA, calling it a great advantage that he can choose his collaborators independently.

Kiska introduced his team of six advisors and a spokesperson in an interview with the private broadcaster Rádio Expres two weeks before the inauguration.

“We can call it the Magnificent Seven that will come with me to the palace,” Kiska said, as quoted by the TASR newswire.

The president’s spokesman will be Peter Petrus, a reporter of the TV JOJ network broadcaster.

The team of advisors includes some distinguished names, such as former Constitutional Court president Ján Mazák, Slovakia’s top expert on constitutional law, who will be his main expert on law and justice, as well as former diplomat Martin Bútora, who recently acted as an advisor for the NATO general secretary, and with whom Kiska plans to consult on foreign policy and sociological issues.
Other members of Kiska’s election team include Tomáš Lehotský, Rado Baťo, Sergej Michalič and Roman Krpelan.

Baťo, a former journalist, headed Kiska’s election campaign. He also worked as spokesman for former prime minister Iveta Radičová. Michalič has been working for the Slovak Democratic and Christian Union (SDKÚ). Kiska now wants the two of them to help with domestic and foreign policy.

Krpelan is former deputy editor-in-chief of the Sme daily and former advisor to one-time health minister Ivan Uhliarik. In his service for the president he will secure communication with the public. Lehotský, who has been working with Kiska for 10 years, will be responsible for management.
Kiska has repeatedly stressed that he wants some key people to stay in the office, mentioning head of protocol Peter Priputen and the head of the office, Ján Šoth.

“I’m not up for any revolution there,” Kiska told the Trend weekly with regard to the president’s office.

Even though the media have been paying attention mainly to Kiska’s pledges and ambitions on the domestic scene, the presidential powers are perhaps greater when it comes to foreign policy. Indeed, Kiska’s first task after the inauguration is his scheduled participation at the Visegrad Group presidential summit in Budapest on June 16.

Slovakia’s foreign policy comes into focus particularly in light of the Ukrainian crisis at the moment when Kiska is assuming the presidential office.

“The face of Slovakia before the Russian-Ukrainian crisis did not differ that much over the past years from its Visegrad partners,” Mesežnikov told The Slovak Spectator, noting that recently, this has changed.

“I expect Kiska to return Slovak foreign policy, also in this context, to its original track, meaning greater solidarity with our Visegrad partners in this situation, particularly with Poland,” Mesežnikov said.

Opening up the office

Mesežnikov admits that his expectations are high considering Kiska’s performance in the office. He expects the new president to turn the office into “something other than just a sort of post office for the ruling party to mediate and handle political orders”, and to be more balanced than his predecessor Gašparovič, who according to Mesežnikov cared mainly about his relations with the ruling political party.

“When he was elected the second time, he did not come to his staff meeting, because Canada was playing, so he was watching a hockey match and he only came when it ended, an hour after midnight,” Kusý said, recounting an anecdote about Gašparovič’s presidency.

“In the case of Mr Kiska it appears he wants to fully devote himself to the post, that it will be his real priority,” Kusý said. “Because such a post requires personal sacrifice too.”

Kiska, who is a father of two small children, claims he is ready for this.

“I have no important hobby that would consume my free time,” he told SITA.