AFTER nine and a half years since the robust pension reform and the launch of the so-called second, private pension pillar, the rules for paying pensions from this pillar have finally been set. While retirees will receive the first pensions from the second pillar in January, it is already apparent that the Slovak old-age pension scheme will need another revamp. 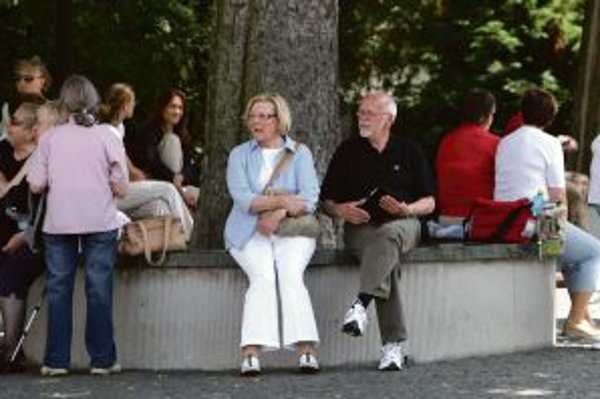 AFTER nine and a half years since the robust pension reform and the launch of the so-called second, private pension pillar, the rules for paying pensions from this pillar have finally been set. While retirees will receive the first pensions from the second pillar in January, it is already apparent that the Slovak old-age pension scheme will need another revamp.

“An annuity revision was born bringing a responsible solution to the benefit of savers and supporting the long-term sustainability of the pension system,” Labour Minister Ján Richter said after parliament adopted the revision on June 5, as cited by the TASR newswire.

The revision was passed after a discussion over what share pensioners should draw from the sum they saved in the second pillar via lifelong pensions and how much they can draw based on their own will. Originally the Labour Ministry proposed allowing programme withdrawal only to pensioners whose entitlement for the old-age pension from the first, pay-as-you-go, pillar is four times the subsistence minimum, or those who receive a combined pension from the first and second pillar exceeding this level.

For now, that amounts to about €800. But the adopted legislation allows programme withdrawal for pensioners whose combined pensions from the first and second pillar exceed the pensions they would have received from the pay-as-you-go pillar if they had not entered the second pillar. Presently, this comes to about €550 and represents a wage level of 1.25 times the average wage in Slovakia, i.e. about €1,030.

This means that in 2015, approximately 12 percent of savers should be able to withdraw part of the second pillar’s savings, while this share should increase to 20 percent in the following years.

Another change drafted by the Labour Ministry pertains to inheriting money saved in the second pillar. While the ministry originally proposed to allow savings from the second pillar to be inherited only until the point at which the saver bought a lifelong pension from a private insurer, the revision introduces a seven-year period during which surviving relatives will inherit the pension that the deceased saver would have received in the time remaining until the end of the seven-year period after the lifelong pension was purchased.

When buying a lifelong pension from an insurance company, the saver will have to decide whether to have his or her pension indexed, i.e. increased by a certain amount each year, and whether, in the event of the saver’s death, his or her spouse and children will receive survivor’s pensions. All of these decisions will affect the exact sum of the pension that the saver will receive.

Savers entitled to receive pensions from the second pillar will be offered to purchase lifelong pensions from private insurers via the central electronic offer system, while those savers who receive no offers due to excessively low savings will be able to draw their money through programme withdrawal or in the form of a temporary pension.

Until now, one had to save money in the second pillar for at least 10 years to draw money from it, but parliament has eliminated this requirement. As of the beginning of 2015, the only condition will be to reach retirement age, which is now 62. Thus, about 3,000 savers will be entitled to apply for the pension from the capitalisation pillar as of the start of 2015.

It is expected that the first pensions will not be high, as the clients of pension fund management companies only have about €5,000 in their accounts. This means that they will not receive more than €30 a month from their pension from the first pillar, the Sme daily wrote.

More changes will be needed

While the discussion about the annuity revision focused on the share pensioners should draw from their second pillar’s savings via lifelong pensions and what they can draw based on their own will, demographic and economic developments already show that Slovakia will need another general overhaul within several years, part of which will also involve raising the retirement age.

The current old-age pension scheme is based on three pillars. The first one is pay-as-you-go, the second, launched in 2005 within the last reform, is the capital private pillar, and the third is the voluntary supplementary pillar. The second pillar has been revamped several times since 2005, with the most significant changes being its switch from obligatory to voluntary and reducing the contributions savers pay into it from 9 percent of their salary to 4 percent, which should increase to 6 percent by 2024. The other 9 percent go into Sociálna Poisťovňa, which manages the first pillar. Currently about 1.2 million Slovaks save in the second pillar, and their aggregate savings exceed €6 billion. Supplementary pension insurance companies administer €1.39 billion in the third pillar.

But while the old-age pension scheme was reformed to reduce the burden on the state, the number of people making contributions into the pay-as-you-go pillar, and from which pensions were previously exclusively paid, has been decreasing, which means that Slovakia will have to come up with new measures.

Experts estimate that Slovakia’s population will shrink either because of an outflow of people working abroad or the low birth rate. The Central and Eastern Europe Development Institute estimates that Slovakia’s population might decrease from its current 5.4 million to 5.1 million by 2060, the online edition of the Pravda daily wrote. The population decline endangers the operation of the state as well as its economic growth.

“People in retirement age do not pay taxes,” sociologist Miloslav Bahna told Pravda, adding that this results in expenditures on social investments, health care and care for people with long-term illnesses.

Vladimír Baláž, a prognosticator with the Slovak Academy of Sciences (SAV), expects that the trend, whereby the number of working people contributing to the pensions of retirees decreases, will worsen.

“Presently we have in Slovakia about a 2.7-million strong group of people which represents the labour force,” Baláž told Pravda. “But currently only 2.3 million people really work and pay contributions into the social system. And also many of them ‘optimise’ their contributions and do not contribute enough. On the opposite side there are about 1.3 million receivers of pensions. Thus, nowadays approximately 1.7 workers contribute per one pensioner. But in 2030 this will be only 1.24, in 2050 only 0.82 and in 2060 only 0.74.”

According to the Statistics Office, which published data about Slovakia’s demographic development in 2013, the country’s population is aging faster than originally expected.

“Expected gains from the birth rate and migration have not materialised; the process of aging has intensified,” Zuzana Podmanická from the Statistics Office said, as cited by TASR, adding that if the current development does not stop, the Slovak population will be one of the oldest in the European Union within 20-30 years.

Baláž estimates that Slovakia will need to reform its pension scheme after six years, i.e. around 2020, as the current one will not be sustainable over the long-term. The scheme would need to be reformed not only because of the shrinking number of workers contributing to pensions and the increasing number of pensioners, but also because of the increasing age of pensioners and related health-care costs. He points out that while nowadays Slovakia spends about 18 percent of GDP on health care and the social sphere, this share is expected to increase to 20 percent by 2030. To tackle this problem, Slovakia would be forced to introduce payments in health care or reduce the rate of wage replacement.

“We do not want to scare people, but we do not have another possibility,” Jozef Burian, the state secretary of the Labour Ministry said, as cited by Pravda. “Also, neighbouring countries are adopting measures in this direction, even much more drastically than we are here in Slovakia.”