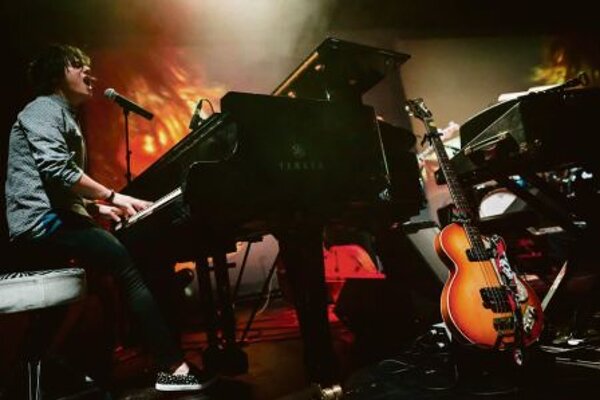 Bratislava
CONCERT: SINGER and pianist Jamie Cullum, one of Britain’s best-selling jazz musicians, comes to Slovakia for the first time. On June 19 at 20:00 in Aegon Aréna NTC in Príkopova 4, Bratislava, he will play his own compositions as well as outstanding cover versions and a lot of improvisations. Tickets cost €32-€99 (VIP) and can be purchased via 02/5293-3321, or www.ticketportal.sk. This show also serves as the intro to Bratislava / Banská Štiavnica City Beats music festival, which will take place in two cities this year, offering prominent artists like German band Jazzanova (with US singer Paul Randolph), Fink (UK), Lulu James (UK), John Newman (UK), Sísí Ey (ICE), Tamir Grinberg Trio (ISR), the band James (UK), Déja-vu (Cuba) and Slovak performers. More information can be found (in Slovak) at www.bacitybeats.sk, tickets again in Ticketportal.

Bratislava
HISTORICAL RE-ENACTMENT: Ubránili Sme Sa! – We Managed to Defend Ourselves! – The 205th anniversary of the siege that nearly saw Emperor Napoleon conquer Bratislava will be celebrated with a re-enactment, including a period-style camp, a military training and the battle itself (at 17:30), complete with cannons (at 21:30).
Starts: June 22, 10:00; Park of Janko Kráľ, Tyršovo Embankment of the Danube River. Admission: free. More info: www.citylife.sk.

Bratislava
HISTORICAL RE-ENACTMENT: Coronation Festival 2014 – The festival of re-enactments of coronations that took place in Bratislava will this year offer the coronation of Joseph I, who became Hungarian king at the age of 9, but died at 32.
Starts: June 21, 11:00 (16:00 coronation parade); Bratislava Castle - Main Square. Admission: free. More info: www. coronation.sk.

Žilina
FILM FESTIVAL: Fest Anča – The International Festival of Animated Films brings hundreds of works, both Slovak and foreign, including Michel Gondry’s Is the Man Who Is Tall Happy?: An Animated Conversation with Noam Chomsky.
Starts: June 18-22; various sites. Admission: €18 (for the whole festival, in advance) - €24 (at the site). More info: www.festanca.sk.

Košice
FESTIVAL: THE USE THE City Festival of street art returns to Košice, facing a new challenge after last year’s stint as the Euro-pean Capital of Culture 2013. This year it will offer the city’s streets to musicians, actors and dancers, graffiti artists, designers, and architects. Throughout the weekend seven streets in the centre will turn into an open-air gallery, a theatre stage, a concert hall and an architectural studio, offering ball free-styling, guerrilla gardening, hip-hop workshop, and more. More information can be found at www.usethecity.sk.