SIR NICHOLAS Winton, a former British broker and humanitarian worker, who saved 669 children (mainly Jewish) from Czechoslovakia before the Second World War, celebrated his 105th birthday on May 19. 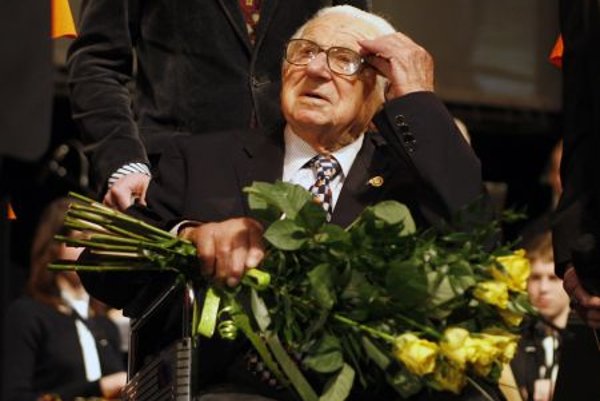 SIR NICHOLAS Winton, a former British broker and humanitarian worker, who saved 669 children (mainly Jewish) from Czechoslovakia before the Second World War, celebrated his 105th birthday on May 19.

Winton, also known as the ‘British Schindler’, was born to parents of Jewish-German origin in the UK. He studied banking in the UK, France and Germany, and after returning home he started working in a British-Czech bank. Before the war, he served in the Royal Air Force and was also active in the Red Cross. After WWII, he held various positions with UN humanitarian organisations, and was involved in local charity organisations after retiring.

His deed went unknown for many years. When his wife, Greta, discovered documents and plans of transports in the attic in 1988, she gave them to a historian focused on the Holocaust, Elizabeth Maxwell. Maxwell organised a meeting between Winton and “his children” in a BBC studio.

However, the story received wider public attention only 10 years later, when Slovak director Matej Mináč shot the feature film Všetci moji Blízki (All My Loved Ones) in 1999, and a full-length documentary, Nicholas Winton: The Power of Good in 2000. The narrator of the documentary is Joe Schlesinger, a reporter of Canadian TV channel CBS, who himself was one of the children saved by Sir Winton. In the end of the movie, Winton meets his “children” decades after the war. In 2002, the film won an Emmy for best documentary.

In 2003, Queen Elisabeth II lent to Winton in March 2003 the Order of the British Empire, thus making him a Sir, the TASR newswire wrote.

A free sequel of the documentary called Nicky’s Family (Nickyho Rodina) was shot in 2011, following the life stories of the children who were saved. Some of them also came from Slovakia.