IN ONE of his first moves after being sworn in, President Andrej Kiska recalled on June 18 three members of the Judicial Council nominated by his predecessor Ivan Gašparovič, replacing the trio in the 18-member top judicial body overseeing the courts with his own nominees. Ján Klučka, Jozef Vozár and Elena Berthotyová replaced Eduard Bárány, Gabriela Šimonová and Mária Bujňáková, with Bárány resigning one day earlier from the council on his own, saying he does not want to be associated with Kiska. 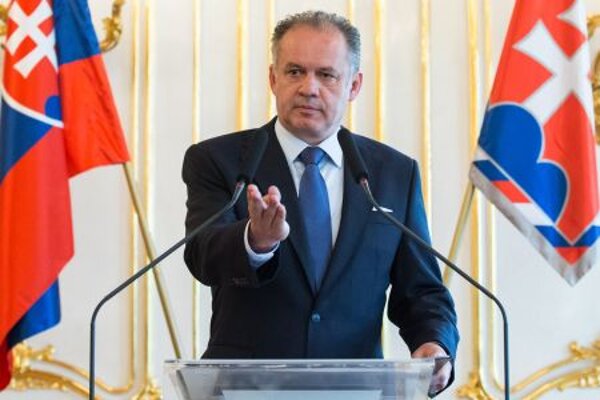 IN ONE of his first moves after being sworn in, President Andrej Kiska recalled on June 18 three members of the Judicial Council nominated by his predecessor Ivan Gašparovič, replacing the trio in the 18-member top judicial body overseeing the courts with his own nominees. Ján Klučka, Jozef Vozár and Elena Berthotyová replaced Eduard Bárány, Gabriela Šimonová and Mária Bujňáková, with Bárány resigning one day earlier from the council on his own, saying he does not want to be associated with Kiska.

In the midst of an intense debate over the authorities of the president regarding the appointment of three Constitutional Court judges, Kiska has created a committee to assess candidates for these positions.

According to Kiska, the new members of the Judicial Council – Klučka, a former Constitutional judge; Vozár, a member of the Slovak Academy of Science (SAV); and Supreme Court Justice Berthotyová – will perform their posts independently. Nevertheless, they do share the president’s vision for the next Supreme Court president to replace Štefan Harabin, whose term ends on June 22.

“As president, I do not intend and I cannot intervene into the decisions that they will be making as members of the Judicial Council,” Kiska said, as quoted by the SITA newswire, adding that, nevertheless, as far as the election of the Supreme Court president is concerned, the president and the candidates have a similar opinion on the personal and professional criteria for the candidates. “The judiciary should get for its top a firm moral authority, whose professional qualities are a natural requirement.”

Kiska hopes that the new president will be elected in the next round of elections, announced for September 16, and requested that the new members of the council work actively towards that end. The incumbent, Harabin, cannot run for re-election in the next round as he failed to get elected in the previous one. The Sme daily tried to get Harabin’s reaction to the changes in the council, which the daily described as the outgoing Supreme Court president “having three votes less” in the council, but he responded that the issue of his potential candidacy, should voting move to a third round, is only hypothetical.

The president consulted his pick for the Judicial Council with people from the judiciary, while he also discussed his broader list of candidates with representatives of non-governmental organisations.

After Harabin’s term ends, the longest-serving member of the council, Klučka, will serve as the temporary head, as Bujňáková, the deputy chairwoman, has been recalled, according to SITA.

“I have signed the decision of the president on establishing an advisory committee for assessing the suitability of candidates for the post of judges of the Constitutional Court,” Kiska said, as quoted by the TASR newswire, adding that Klučka would serve as the head of the body.

Kiska has formulated general criteria that he believes constitutional judge should meet while the committee has a month to submit its recommendations.

There are only a few legal conditions a candidate has to meet in order to become a candidate for the Constitutional Court, Kiska noted, adding that “as far as I know, the parliament neither set nor scrutinised any professional or non-formal criteria when assessing the candidates before the vote”.

Three spots will open up in the court after the 12-year terms of three judges expire in July.

Watchdogs have panned Smer for its candidate list, suggesting that it stands in sharp contrast to Prime Minister Robert Fico’s much publicised effort to purge the country’s judiciary, which became a key part of his failed presidential campaign.

“This election showed that rhetoric on cleansing the judiciary was only a simulated marketing trick,” Zuzana Wienk, director of the Fair-Play Alliance, told The Slovak Spectator earlier this year. “The ruling majority swept experienced candidates with international reputations from the table and elected largely unknown lawyers from among those who are directly contributing to the problems.”

Smer denied having coordinated the selection of candidates, with party member Róbert Madej telling Sme that although there was a discussion within the party’s caucus, the party “honours the secret ballot so that deputies can make an independent decision”.

Now Kiska is saying that he would personally attend the hearing of the judges at the committee and “then make the decision”.

Meanwhile a discussion has emerged over the president’s authorities regarding the appointment of new constitutional judges.

Justice Minister Tomáš Borec, tasked by the government with examining the issue, turned to the Venice Commission and inquired whether the newly elected president may reject all of the proposed candidates and require parliament to submit a new list.

The Venice Commission on June 13 responded that the newly elected president “has no power under the Constitution to reject all of the proposed candidates and require the National Council [parliament] to submit a new list”, according to an official release by the European Commission for Democracy through Law.