RUMOURS of changes within the Smer party leadership have swirled since Prime Minister Robert Fico’s failed presidential campaign, and are reemerging again ahead of the ruling party’s June 28 congress. 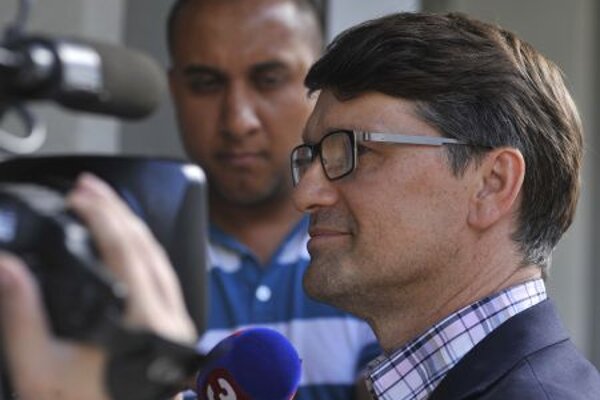 Marek Maďarič has stepped down from his deputy chair post; others may follow. (Source: SITA)
Font size:A-|A+0

RUMOURS of changes within the Smer party leadership have swirled since Prime Minister Robert Fico’s failed presidential campaign, and are reemerging again ahead of the ruling party’s June 28 congress.

Shortly after Fico lost the presidential election to philanthropist Andrej Kiska, Culture Minister Marek Maďarič, who managed Fico’s campaign and has since stepped down as deputy chairman of Smer, admitted that a reshuffles was possible. He also denied that it would be linked to the outcome of the election.

Two ministers, two deputy chairmen of Smer and several deputy ministers at ministries, including several regional and district functionaries of Smer, might be out of a job at the party congress, the SITA newswire reported on June 18, with Education Minister Dušan Čaplovič and Economy Minister Tomáš Malatinský reportedly among them.

Nevertheless, Smer leaders have not confirmed any of the reports, with Interior Minister Robert Kaliňák saying that changes might depend on how Smer members are identified with the goals that the party sets for the next two years.

“Who will be identified with how active, how flexible and effective we have to be; and whether he/she will say that he/she wants someone younger or newer to do it,” Kaliňák said, naming the factors for SITA on which the changes would depend, adding that Smer will try to “bake a new cake”.

Even though Maďarič has stepped down as deputy chairman, SITA reported he may return to the position.

According to SITA, Čaplovič, along with his ministerial seat, will also end up as a deputy chairman again, and while the new education minister might be the current state secretary of the Finance Ministry, Peter Pellegrini, the deputy chair post might go to governor of the Žilina region Juraj Blanár. Pellegrini is named by SITA as future deputy chairman of Smer, replacing MEP Vladimír Maňka, who failed to defend his position as governor of Banská Bystrica Region and lost to extremist Marian Kotleba. SITA speculated that Malatinský might be replaced by current Environment Minister Peter Žiga.

Malatinský earlier this year told SITA that he thought his seat was secure. “I am not getting ready to go anywhere,” he said.

While the TASR newswire also reported that Malatinský might be replaced, the newswire reported that Pavol Pavlis, the state secretary of the ministry, should replace Malatinský in the post, while Juraj Gedra of the national privatisation agency, the National Property Fund (FNM), should take Pavlis’ job.

According to Kaliňák, the Smer congress will discuss different opinions and issues.

“It would be fair to discuss these [ideas] first at home,” Kaliňák said.

Nevertheless, Smer’s general manager, Ján Richter, who also serves as labour minister, has confirmed that personnel issues will also be discussed at the congress: “either those who have already been opened up or those we arrive to at the congress”.

Smer has been denying overall that the results of the presidential elections would serve as a reason for reshuffling Smer leaders.

“Presidential elections do not give a reason for changes to the government, but the half-time of [Smer’s] rule could evoke such changes,” Maďarič said on April 2, as quoted by SITA.

Some members of Smer believe that they can re-elect Maďarič to the post of deputy chair or persuade him to only propose his resignation, since they do not consider the campaign to have been a failure. They also told the Sme daily that nobody has forced nor recommended Maďarič to resign.

After the first round of the presidential elections, Fico defined the presidential vote as a “referendum on Smer”. While the results show that Fico and Smer still have the support of almost 900,000 people, which according to Grigorij Mesežnikov, president of the Institute for Public Affairs (IVO), is not a negligible number, it is also “not enough for the government to consider itself to stand for the entire society”.

Martin Slosiarik from the Focus polling agency told The Slovak Spectator that the voters might have simply submitted the bill for the two years Smer has ruled the country alone and must bear full responsibility for all that has happened.

Pundits still do not expect any dramatic changes within Smer.