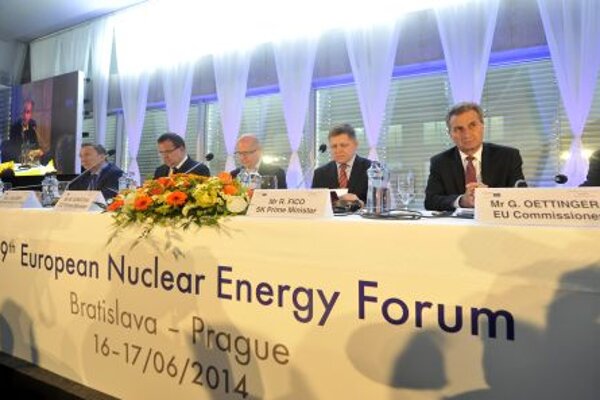 “Our effort is to achieve until 2030 the share of low-carbon technologies of the total production of electricity at the level of 80 percent,” Fico said, as cited by the TASR newswire. “We consider it important that new rules of the EU enable effective development of the nuclear energy sector while keeping the high level of safety.”

Fico voiced regret that the construction of the third and fourth blocks of the nuclear power station of Slovenské Elektrárne in Mochovce is lagging behind the scheduled plan, while there is a danger that the commercial operation of the third block may start only in early 2017. He also reiterated Slovakia’s plan to build a brand new nuclear power station in Jaslovské Bohunice.

“Without further development of nuclear energy, the Czech Republic and probably also some other countries would be unable to fulfil their pledges in the area of carbon dioxide emissions if they want to develop their existing industries,” said Sobotka.

“We have to return to [economic] growth and competitiveness,” said Oettinger, as cited by the Euractiv.sk, adding that the EU needs high-performance industry and affordable electricity. Producers in Europe pay three to four times the price for natural gas compared to the United States, while the cost of electricity is two times higher on average.

Oettinger believes that the growth of the world population, the automation of the economy and usage of electric cars will lead to increased demand for electricity. He said that within the global energy portfolio, all forms of energy are needed and thus it is necessary to seek ways to integrate these forms of energy into a unified energy market. Regarding the question of whether the EU should exclude some sources of energy, or give preference to some energy carriers over others, the EU commissioner holds the opinion that the EU should not use the imperative “either or”, but push for the solution “as well as”.

The ninth session of the European Nuclear Energy Forum took place in Bratislava between June 16 and 17 and was attended by about 200 people, including top politicians and energy experts. Some of the main topics included new approaches of the EU to nuclear energy, questions related to transparency and a dialogue for choosing the energy mix.