CHAMBER OPERA has returned to Bratislava this spring, a format which is common throughout Europe, but has been absent in Slovakia’s capital for 15 years. 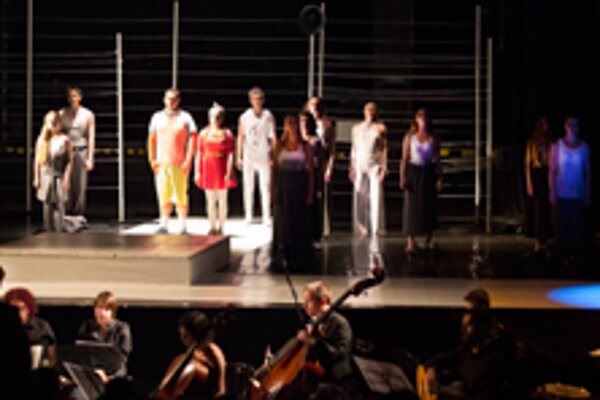 CHAMBER OPERA has returned to Bratislava this spring, a format which is common throughout Europe, but has been absent in Slovakia’s capital for 15 years.

Members of the Bratislava Chamber Opera (KOB) civic association sought to change this and reconnect with an older tradition.

“We decided to give the opportunity again to young students of artistic academies to perform with a live orchestra, to play onstage and to acquire professional experience,” general manager of the KOB Roman Müller explained, as quoted by the TASR newswire. Müller also plays in the ensemble’s first performance.

For their premiere, the KOB chose the works of Terezín composers, including the fairly obscure opera Brundibár by Czech composer of Jewish origin Hans Krása, which was first performed in September 1943 in the Terezín detention camp. The “children’s opera” was rehearsed in the Czech town’s Small Fortress, which was turned into a concentration camp for Jews to improve the International Red Cross committee’s impression of the camp, and later even performed for a Nazi propaganda film.

Other works of the first performance include String Trio by Gideon Klein and Three Hebrew Boys’ Choirs by Viktor Ullmann, both accompanied by a contemporary dance performance by Renata Ptačín.

The works were first played on March 31 and re-run on June 6. For June 26, a gala evening of the Bratislava Chamber Opera is planned, in which the ensemble will be accompanied by professional singers Božena Ferancová, Dušan Jarjabek and Ľudovít Ľudha. All performances take place in the DK Zrkadlový Háj house of culture in Bratislava’s Petržalka borough. The Kultúrne Zariadenia Petržalky organisation, which operates the DK Zrkadlový Háj, announced a long-term collaboration with the KOB. Tickets for the June 26 gala evening, which starts at 19:30, cost €10 and can be purchased either at the DK Zrkadlový Háj ticket office or via the Ticketportal.sk website.

The first performance was directed by Tomáš Sloboda and both the orchestra and choir of the KOB were conducted by Lukáš ‘Kunst’ Lederer, a young musician who is the musical manager and chief conductor of the ensemble. He stressed that the association does not intend to compete with professional opera, but rather bring a new perception, “as we are all students or fresh graduates of performing academies”, he said. He added that the goal is to bring young people closer to professional performances, as not all of them are able to gain experience with the stage during their studies.

“This can be a starting point for bigger stages, so that they can get some repertoire – be it an operatic or musical-dramatic genre – and to become better known in Czech and Slovak musical subculture,” Lederer summed up.

Müller added that their idea was also to help not just young singers and musicians, but also directors, conductors, stage and costume designers, and any young artists who have nowhere else to obtain experience.

The repertory should consist of chamber operas, but also operettas or classical musicals.

“My big dream is to return to Bratislava the spirit of the 1990s at the Nová Scéna theatre, where tourists from all over Europe used to visit operettas,” Müller told TASR, adding that the new musical ensemble also plans to play works of contemporary Slovak composers and authors. More information can be found (in Slovak) at the ensemble’s website.