Puppet theatre not only about puppets

EVIDENCE of just how rapidly puppet theatre has evolved into an alternative art form, utilising various objects, human actors and even the audience as puppets, was on display at the V4 Countries’ Theatres vol. 16 held in Nitra on June 9-11. 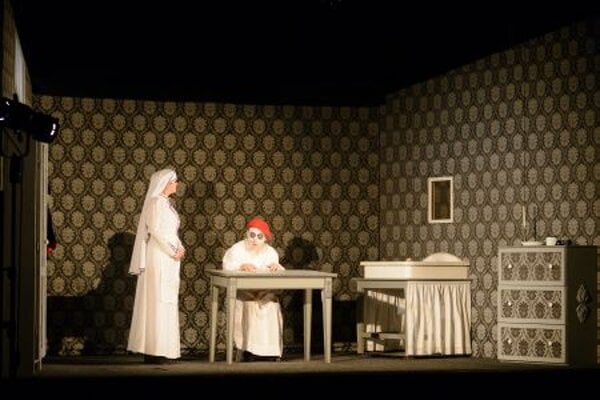 The festival was not your standard puppet theatre. (Source: Henrich Mišovič)
Font size:A-|A+

EVIDENCE of just how rapidly puppet theatre has evolved into an alternative art form, utilising various objects, human actors and even the audience as puppets, was on display at the V4 Countries’ Theatres vol. 16 held in Nitra on June 9-11.

The theatre festival is organised by the Old Theatre of Karol Spišák in Nitra (SDKŠ) with the goal to create an event where people of the V4 countries’ theatres and art schools can meet, discuss and admire each other’s work. On average, 200 to 300 people attend the event each year, while some theatres outside the V4 countries also participate, SDKŠ actor Katarína Petrusová told The Slovak Spectator. This year, 21 performances, two concerts and several discussions took place at the festival.

Puppet theatre was originally not intended for children, and it was, in fact, not uncommon for performances to confront contemporary political issues. Many performers at this year’s event sought to bring this element of political commentary back into the genre, as well as a broader interpretation of what actually constitutes a puppet.

Despite the participation of numerous puppet theatres, this is not an orthodox puppet theatre festival, but rather, a festival of symbols which can be depicted by puppets, various objects, voices and so on, festival director Veronika Gabčíková told The Slovak Spectator.

“Each of those objects representing a living being is a puppet,” Gabčíková said. “Even a person can be puppet. This is a global trend.”

Moreover, performances at the event continue to be held in closer proximity to the audience, as actors are choosing smaller venues for their representations instead of big theatres. They also interact with their audience, and touch them or talk to them during the performance, Petrusová said.

This year, several performances and discussions directly or indirectly referenced socialism, Russian politics and the current crisis in Ukraine. For example, Czech theatre Divadlo Líšeň displayed an adaptation of A Russian Diary, the book by murdered Russian journalist Anna Politkovskaya. It covered part of Vladimir Putin’s presidency, representing Putin as a matryoshka doll.

Gabčíková explained that puppet theatre was originally street art meant for adults, with political commentary and often times aggressive or cynical language. This changed after the socialist regime gained dominance over the region.

Despite the fact that SDKŠ is not a political theatre and usually does not address such issues, politics is part of human life and the Ukraine crisis has affected many people, even actors, according to her.

“Since people live with politics it will somehow appear in that performance,” Gabčíková said. “It is part of life and everyone comments on it, especially on issues which affect them.”