Gothic treasures of the Košice region

The architectural diversity of Slovakia is the most visible through its castles, but fewer tourists take note of the gothic art in the form of altars and table paintings that are among the richest in Europe. The Košice region is the easternmost boundary of gothic architecture. St Elizabeth’s Cathedral in Košice is Slovakia’s biggest church with a main altar as well as a stone portal that are among the most precious artworks dating from its era. 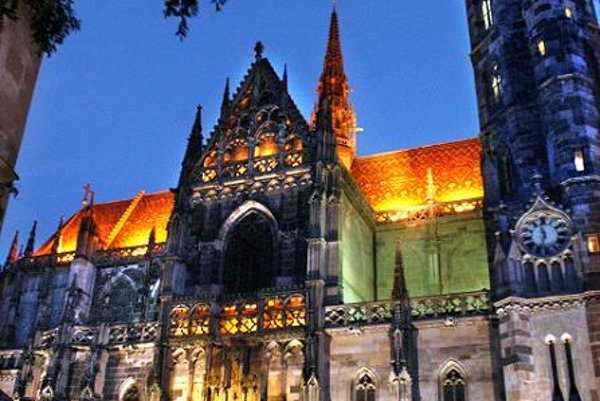 The architectural diversity of Slovakia is the most visible through its castles, but fewer tourists take note of the gothic art in the form of altars and table paintings that are among the richest in Europe. The Košice region is the easternmost boundary of gothic architecture. St Elizabeth’s Cathedral in Košice is Slovakia’s biggest church with a main altar as well as a stone portal that are among the most precious artworks dating from its era.

St Elizabeth’s Cathedral is not only a leading representative of gothic architecture, but is representative of the division between the Catholic and Byzantine worlds that began during the Middle Ages. In short, everything east of Košice, fell under Byzantine influence.

“The excellence of the preserved gothic buildings in Slovakia is evident in the number of surviving works of art, winged altars, sculptures and the murals and architecture,” said art historian Peter Kresánek.

The German-speaking population brought with its mediaeval sacral constructions between the 12th and 15th centuries as they repopulated areas wiped out by the Tatar armies. They were predominantly farmers, craft people and miners who, according to Kresánek, brought with them their culture of building churches. The thriving mining and commerce brought more money to the Spiš and Gemer regions and thus the locals were able to invite master builders. Later, mining gradually declined, which resulted in fewer investments into sacred buildings.

Eastern Slovakia offers tourists a unique way to visit some interesting gothic monuments. The Gothic Route was established as the first thematic-cognitive route in Slovakia. It is a tourism circle divided into four smaller circles that connect at the most interesting sites in the Spiš and Gemer regions. Brown and white signs with pictograms in shape of gothic arches point the way to individual monuments. Castles and manor houses serve as museums, with regular opening hours and professional guides. Cathedrals and churches are open to public mostly during services. Generally, visits can be arranged in advance through local tourist offices, however booking in advance is recommended. It is best to use a car for travelling between small villages because public transport is complicated and infrequent.

“Rožňava’s main square is the oldest and biggest mediaeval square with a square plan in Slovakia” said tourist guide Štefan Kesi. The town’s most important gothic construction is the Bishop’s Cathedral of the Assumption of the Virgin Mary. From the front, the church looks like one structure with a tower. But looking from the side, tourists can see that the bell tower and church are separate constructions.

The church was finished in 1304 and a classic baroque bell tower was added almost five centuries later. The interior of the church is full of murals, but the most important is a panel painting of St Anna Samotretia, dating from 1513 and called Metercia. It features three holy
persons. “Interesting is the background of the painting,” Kesi said. “It is not golden like other works from this period. Instead, it shows mining scenes from various places around Rožňava. It is the oldest contemporary representation of mining.”

Churches in the small villages surrounding Rožňava are excellent gothic examples as well.
“In the area of few kilometres, there are three mediaeval churches and one of the most valuable frescoes in Slovakia,” said historian Štefan Podolinský, adding that besides in Štítnik, Koceľovce and Ochtiná there is yet another early gothic church in Roštár.

Štítnik serves as an example of connection between German émigrés, mining and gothic architecture. It was settled in the 13th century as a mining borough. The protestant church is a massive gothic building that dominates the town and its surroundings. Murals drawn largely employing the Italian fresco technique originally covered all the interior walls of the church. They were created gradually in at least three different periods and represent different religious scenes including life of Jesus, the Apocalypse and also painting of St Barbara – the patron saint of miners.

Northwest of Košice is Spišská Nová Ves – the centre of Spiš region. The Roman Catholic Church of The Ascention of the Virgin Mary is visible from afar thanks to its 87-metre-high neo-gothic tower. This tallest church tower in Slovakia is open to public. It has seven clock faces driven by a single set of clockwork. The church also has a bronze baptismal font from 1549, part of which historians attribute to the first gothic bell-foundry workshop in Spiš, founded by Master Konrád. The original gothic main altar was replaced in 1621 by another Renaissance altar.

More examples in the Spiš region are churches in Odorín (romanesque-gothic building with representative portals), Chrasť nad Hornádom (unique rotunda with four apses), Vítkovce (early gothic building with frescoes), Žehra (its Church of the Holy Spirit is on the UNESCO World Heritage List as part of the “Levoča, Spiš Castle and Associated Cultural Monuments” grouping). Also part of the gothic route are more well-known places like Spiš Castle, Castle Krásna Hôrka and the Manor House in Betliar.