ONLY weeks after the Slovak parliament passed the constitutional definition of marriage, which non-heterosexual activists and the foreign press have dubbed a constitutional ban on same-sex marriage, the LGBTI community calls on all families to join their pride march to support equal rights for all. 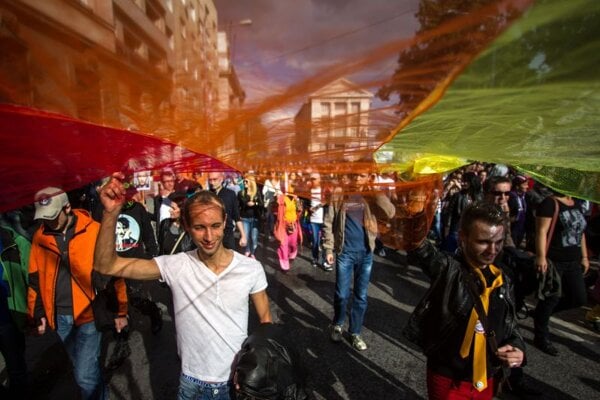 ONLY weeks after the Slovak parliament passed the constitutional definition of marriage, which non-heterosexual activists and the foreign press have dubbed a constitutional ban on same-sex marriage, the LGBTI community calls on all families to join their pride march to support equal rights for all.

“This year, Rainbow Pride Bratislava is a criticism of the situation in Slovak society more than ever before,” the event’s spokesperson Romana Schlesinger told The Slovak Spectator. Since last September, when the previous edition of the Pride march was held in Bratislava, the lesbian, gay, bisexual, transgender and intersex (LGBTI) community has seen its situation deteriorate. Schlesinger mentioned the victory of a far-right extremist in the regional elections, the Catholic Church’s campaign against the LGBTI community and the traditionalist definition of marriage which recently became part of Slovakia’s constitution via the joint initiative of the ruling Smer party and the opposition Christian Democratic Movement (KDH).

On June 28, 2014, the Rainbow Pride Bratislava parade will take place for the fifth time. This time around it is being organised by various civic associations, like the Queer Leaders Forum, the Initiative Inakosť, NoMantinels, TransFúzia and informal activists. The annual event unites the voices of the worldwide LGBTI rights movement, calling for equal rights for the non-heterosexual community in general.

This year, however, the provision which was added to the constitution and which LGBTI rights groups perceive as a constitutional ban on same-sex marriage, has prompted the Pride organisers to stress the local specifics of the problems the non-heterosexual community is experiencing in Slovakia.

While the previous editions of Pride pointed to the absence of laws, this year “we have unfortunately joined the ranks of countries which have moved backwards”, as Schlesinger put it.

The organisers of Rainbow Pride have adopted the theme of family for this year’s march, calling on the participants to “come out with their families” to show that there are many different kinds of families rather than the one defined by Slovakia’s constitution.

The organisers stress that their concerns over the constitutional amendment are not only LGBTI-related, as they perceive it as “discriminating against all people who do not live in a heterosexual marriage”, such as single, divorced or widowed parents, same-sex couples or foster families, Schlesinger said. While security issues did not make early editions of Bratislava’s Pride march especially family-friendly, when violent clashes spurred by radical homophobic groups erupted, the organisers believe there is no need to worry about the safety of the participants this year.

“Last year for the first time we noted no disruptions in the event, and that is what we expect this year too,” Schlesinger told The Slovak Spectator, noting that the Rainbow Pride organisers are cooperating with the municipal authorities and the police, as well as a private security company, to secure the event.

Last year’s Rainbow Pride march was seen to some extent as having to compete with a pro-life march that took place on the same weekend in late September 2013 on the other side of the country, in Košice, organised by Roman-Catholic bishops and dozens of pro-life organisations. This time around, no such major event is planned to coincide with the LGBTI pride march, but conservative groups have announced they are going to organise a so-called ‘live chain’, which they have done during past Rainbow Pride events.

Despite pressure from conservative groups and recent political developments, however, Schlesinger does not believe that the attitude of Slovaks towards LGBTI people has become more negative.

“I rather think the effect might be quite the contrary, which I see confirmed empirically too,” Schlesinger said. “People are angry, and it’s not just LGBTI people; they do not like the links with the Church and the religious ideology.”