VOTER support for the ruling Smer party continues to drop in the run-up to the party’s working congress, which is expected to reshuffle both the party’s leadership and the cabinet. 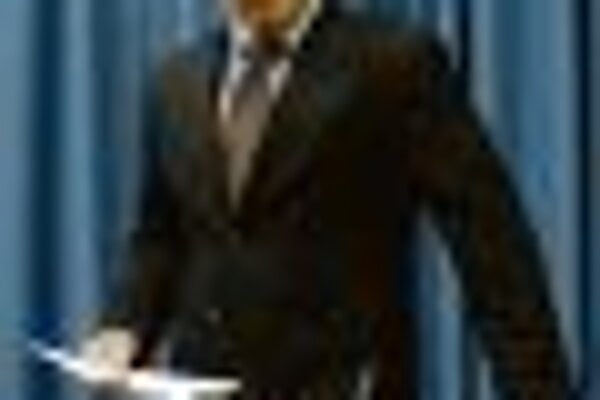 VOTER support for the ruling Smer party continues to drop in the run-up to the party’s working congress, which is expected to reshuffle both the party’s leadership and the cabinet.

Smer would receive 32.2 percent of the vote, based on the results of the latest Focus polling agency survey, which was carried out between June 3 and 10 on a sample of 1,025 respondents. This is a further decrease in voters’ preference for the ruling party compared to May 2014, when Smer stood at 34.6 percent, and is the party’s worst score in four years.

Meanwhile, the newcomer on Slovakia’s political scene, the Sieť party of third-place presidential candidate Radoslav Procházka, is continuing to strengthen its position among voters. The party plans to make its first election appearance in the upcoming municipal elections in autumn 2014.

Sieť, which was officially registered on June 12 but started appearing in opinion polls earlier, garnered 15.8 percent in Focus’ June poll, up by 2.5 percentage points compared to last month. It remains the second strongest party after the ruling Smer, leaving behind well-established parliamentary parties like the Christian Democratic Movement (KDH), which would take 9.3 percent of the vote, according to the poll, similar to the previous month.

Ordinary People and Independent Personalities (OĽaNO) also improved its standing this month with 7.6 percent, compared to May when it only got 5.3 percent.

Freedom and Solidarity (SaS), the Slovak Democratic and Christian Union (SDKÚ), the non-parliamentarian Party of Hungarian Community (SMK) and Most-Híd would also make it into parliament, barely passing the 5-percent threshold. Their scores in the poll were as follows: SaS with 5.5 percent (up from 4.1 percent in May), SDKÚ and SMK with 5.1 percent each, and Most-Híd with 5 percent.

The NOVA movement (3.4 percent) and the nationalist Slovak National Party (2.4 percent) would not make it into parliament.

In addition, almost onefifth of the respondents (19.8 percent) said that they would not have gone to the polls, while another 16.5 percent said that they either did not knowwhomto support or did not want to respond.

Smer to address the drop

Pollsters have suggested in their interpretation of the results that Sieť might be benefiting from the fact that dissatisfied Smer voters are looking for an alternative, and Procházka’s project might look appealing to them. They estimate about one quarter of Sieť voters to be people who either voted for Smer or did not vote at all in the 2012 general elections, the Sme daily reported.

Smer’s waning popularity in the polls comes on the heels of the lacklustre performance of its candidates in the European Parliament elections, as well as the earlier defeat that the party’s leader, Prime Minister Robert Fico, suffered in the presidential race against new President Andrej Kiska.

The prominent politicians of the ruling party have repeatedly admitted that the declining popularity of Smer and its candidates will be addressed at its working congress, scheduled for June 28.

Two ministers, two deputy chairmen of Smer and several deputy ministers, including several regional and district functionaries of Smer, might be out of a job at the party congress, the SITA newswire reported on June 18, with Education Minister Dušan Čaplovič and Economy Minister Tomáš Malatinský reportedly among them.

Nevertheless, Smer leaders have not confirmed any of the reports, with Interior Minister Robert Kaliňák saying that changes might depend on how Smer members are identified with the goals that the party sets for the next two years.

The only change that the party experienced so far following the lost presidential election was that Culture Minister Marek Maďarič, who led Fico’s presidential campaign, has since stepped down as Smer’s deputy chairman. He might, however, still be re-elected into the position at the congress.