Freedom vs limits, art vs taboo

THE Len Tak Tak (meaning “hardly,” or “just”) troupe and the eponymous civic association combines theatre performances for audiences on a regular basis, and a way for physically challenged performers to express their creativity and talents together with other artists. This is an original combination in Slovakia, but also as unique of an example of self-expression as one is likely to find anywhere. 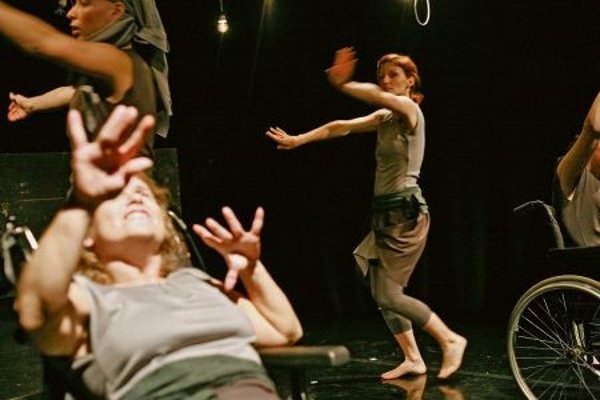 THE Len Tak Tak (meaning “hardly,” or “just”) troupe and the eponymous civic association combines theatre performances for audiences on a regular basis, and a way for physically challenged performers to express their creativity and talents together with other artists. This is an original combination in Slovakia, but also as unique of an example of self-expression as one is likely to find anywhere.

“We started in 2007,” founder, dancer and psychologist Lucia Šuplatová told The Slovak Spectator. “I was part of a similar integrated dance group in Prague, called Freedom4, and after I returned I was searching in vain for something similar. So I decided to create such a group and contacted the Home for Social Services (DSS) in Mokrohájska Street in Bratislava. As they were open to cooperation, I made a sample workshop to give them the idea, started recruiting and girls started coming.”

Šuplatová further said that after the first trainings and rehearsals in the DSS canteen, she had no bigger ambitions than to have fun, to combine disabled girls and women in a larger group and to explore the physical possibilities of dancing. The first piece was performed at the DSS, and the Moment of Dance then played at the A4 Nultý Priestor venue.

“We had a dancer with us, Kristína Kondlová, and after she left for maternity leave, Zuzana Vasičáková Očenášová joined us, a dance therapist who had more experience with dramaturgy and script-writing, and so we started to work with her more seriously,” Šuplatová continued.

Vasičáková Očenášová says the project “completely absorbed” her. “I originally came to do one workshop with them, and stayed until now,” she added.

The first performance made with her was Morské Paničky (“Mer-Ladies”). Vasičáková Očenášová, a trained lawyer and dancer with education in art-therapy, was in charge of the plot and the choreography. Later, a professional dancer led the physical exercises and movement preparations.

It was premiered in the Elledanse theatre, while the following performances were already rehearsed and staged in Studio 12 of the Theatre Institute in downtown Bratislava. Among them were Pohyblivé Pobrežie (Moveable Coast), Oranžová Epizóda (Orange Episode) and Tabu (Taboo); the last, however, was already made for the stage in Pisztory Palace. Both Šuplatová and Vasičáková Očenášová agreed that working with non-professional dancers with movement limitations is limiting in some ways, but also opens to door to new possibilities .

“It can’t be that a choreographer comes and shows them the steps and what to do,” Šuplatová said. “We always try to draw from their inspiration, their movements, their bodies. A motif is set, then we improvise and gather material of movements for the final choreography. Of course, it was difficult in the beginning, but after all the years of training, they dare even leave the wheelchair and go back to it.”

As for audiences, “first, it was mostly our friends, relatives and acquaintances who came”, Šuplatová said. “But later on, especially now in the Pisztory Palace, it seems that also people outside this group are coming.” She added that even compared to the Czech group she worked with previously, the Slovak ensemble probably has more visitors.

“For about a year, we are actively in the Pisztory Palace on Štefánikova Street – we even helped reconstruct its left wing and adapt it [as a space for community theatre, for us, the Divadlo Bez Domova (Homeless Theatre) and the riding-theatrical group Equiteatro],” Vasičáková Očenášová said. “The last pieces were made specifically for this space. However, the physical limitations of our performers make it hard to bring them to the stage, which is upstairs.”

She added that Šuplatová asked her, as a professional choreographer and dance-therapist, to collaborate in 2009, and they have since worked together continuously.

The piece currently playing – once per month – is Taboo. It explores the social acceptance, prejudices and self-perceptions of the body, and the physical features, ups and downs, complexes and taboos – an issue quite common and a sore point, especially for women. The June 6 performance drew a lively response from audiences.

The composer of the music for the piece, Valér Miko, also contributed to its success, as he accompanied the dancers live (for the first time since the premiere, Vasičáková Očenášová said); sometimes even improvising and adapting the music to their movements. After the performance, he gave a concert of pieces from his debut album.

The theatre ensemble has serious ambitions. Both artists said that apart from the current play and occasional in-situ performances based on improvisations, like the one at the Via Bona prize gala-evening, they are planning a new premiere for the end of this year.

Since 2011, the troupe also registered the civic association Len Tak Tak, and they have been organising “ballroom dancing for those who are shy”, integrated musical-dance jam sessions, movement workshops for children with and without physical disabilities, dance-movement therapy for autistic children and their parents, integrated dance workshops and other activities.

“I understood that for me, this is even more exhilarating than the art of non-integrated professional dance, as the limits cause unbelievable added values,” Vasičáková Očenášová said. “This is also an art that brings dance much closer to real life, and the stage closer to the auditorium.”