THE WORKING summit of the ruling Smer party at the end of June brought a number of changes in its leadership. 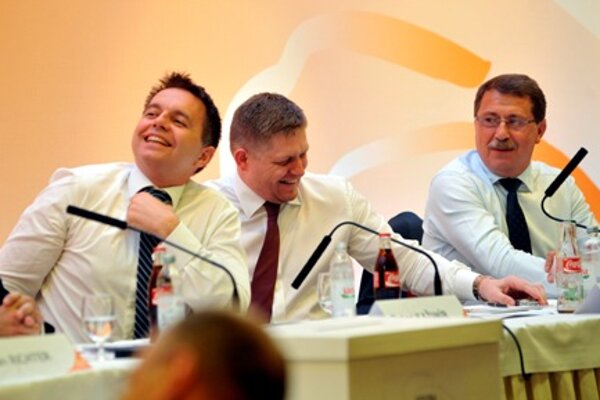 THE WORKING summit of the ruling Smer party at the end of June brought a number of changes in its leadership.

In reaction to the recent drop in party preferences, as well as the failure of Smer leader Robert Fico in the presidential election, Smer replaced its deputy chair, Vladimír Maňka (who also works as the party’s MEP), with Peter Pellegrini, the Finance Ministry’s State Secretary and head of Banská Bystrica regional Smer structures. Culture Minister Marek Maďarič, who offered his resignation following the presidential election, thus taking responsibility as the leader of Fico’s presidential campaign, was re-elected into his post during the June 28 summit.

Fico admitted that the party is preparing to make changes in the cabinet too, but did not go into detail. Replacements in the cabinet are to be announced the first week of July.

In his speech to the delegates, Fico was critical towards his party colleagues.

“I’m saddened as party chairman to see expressions of arrogance at the regional level,” he said, as quoted by the TASR newswire. “Some of our representatives have stopped communicating with mayors and underestimate the value of feedback. Because of this, there will be changes not only in the party echelons but also at lower levels.”

Regional and district party councils are expected to carry out personnel audits of nominees in state managerial posts and public administration.

“It happens sometimes that a party nominee makes a bad reputation for Smer,” Fico said, as quoted by TASR. “There are only two criteria - whether they fail morally or fail in the area of their expertise.... We need to act as social democrats in all spheres. Unfortunately, that is not always the case.”

The party agreed at its summit to pursue what Fico called a post-consolidation “positive package” of changes, and presented this as the main message from the party to the public on June 28.

Smer maintains that Slovakia has been successful in consolidating public finances and therefore is now free to usher in measures designed to improve living standards, Fico said, as reported by TASR.

“This positive package will cost approximately €250 million, but we dare to do this as we have not only good consolidation under our belt, but successfully managed also the fight against tax evasion and enjoy higher income from taxes as a result. This is all very good news,” said Fico, as quoted by TASR.

The set of measures will consist of increasing the minimum wage and Christmas bonus contributions, reducing levies in the category of mid- and low-income employees, the introduction of a minimum pension, the option to simultaneously receive a wage and welfare on a temporary basis, a double-digit drop in gas prices for households in 2015-16 and boosting the capacity of kindergartens.

Smer also wants to increase discounts for train commuters from 35 percent to 50 percent, to usher in train transport free of charge for all pensioners and students of primary schools, high schools and universities, enlarge student exemptions from levies on employment agreements, raise contributions for teachers’ assistants of mentally handicapped students, support professional education, lower taxes in the sphere of research and development and implement the option to pay VAT after payment for received invoices, TASR reported.

Finance Minister Peter Kažimír claimed that this set of measures will not endanger Slovakia’s fiscal targets.

“It won’t be at the expense of either the deficit or the public debt. In order to embrace such an initiative, we had to put public finances to order first,” Kažimír said, as quoted by TASR, adding that the government wants to cover this with income received from fighting tax evasion.

The opposition has slammed the measures announced by Smer as a populist gesture and a start of the campaign before the 2016 parliamentary election that the taxpayers will have to pay for.