AFTER a quarter of a century, representatives of three countries commemorated the fall of the infamous Iron Curtain that once divided the democratic world from the “dictatorship of the proletariat” regimes. Slovakia and Hungary belonged to the “totalitarian East”, while Austria represented the “democratic West”. 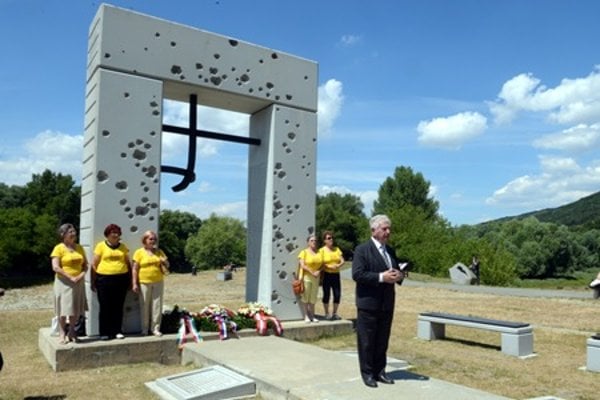 AFTER a quarter of a century, representatives of three countries commemorated the fall of the infamous Iron Curtain that once divided the democratic world from the “dictatorship of the proletariat” regimes. Slovakia and Hungary belonged to the “totalitarian East”, while Austria represented the “democratic West”.

The site is called Klingenbach and lies at the Austrian-Hungarian border. From there, the commemorative event continued to the Hungarian town of Sopron, a point from which hundreds of people fled the country during communism. The event then moved to the Gate of Freedom in Devín, near the Slovak capital, Bratislava. There, Szijjártó was replaced by another state secretary, Vince Szalay-Bobrovniczky, the TASR newswire wrote. Devín, lying close to the border, was a location where many people from then Czechoslovakia, as well as other countries of the communist bloc, tried to cross the Danube or Morava Rivers to find freedom in Austria, with many of them finding death or imprisonment and persecution instead.

One of those caught while trying to emigrate is Slovak priest Anton Srholec. In 1951, he attempted to swim across the Morava River to Austria, but was caught and sentenced to 12 years in prison. He served 10 years, mostly in the uranium mines near the town of Jáchymov.

“For me, the totalitarian regime brought a life-long trauma,” Srholec said. “I yearned for freedom and when it was finally fulfilled, it was as if I was born again,” he told students of international relations, law and political science from all three participating countries who attended the event.

“It is a historical moment,” Pavol Krajči, law student at the Comenius University in Bratislava, said. “I was born four years after the Velvet Revolution [which toppled the communist regime in Czechoslovakia without violence], but my parents recall to this day how they were allowed to travel freely to Vienna only then. Today, we have the chance to travel freely without any trouble and to study abroad. This is a great gift.”
Lajčák stressed that this was the first time that Slovakia participated in the memorial celebration, as until now, only Hungary and Austria had taken part.

“I am very happy that young people were here with us,” he said. “It is necessary to commemorate such historical moments, as freedom is never guaranteed and we have to protect and defend it.”