HETEROSEXUAL families and representatives of the ruling Smer party joined this year’s Rainbow Pride march, just weeks after the Smer-led Slovak parliament passed a constitutional definition of marriage that LGBTI activists have called a ban on same-sex marriage. 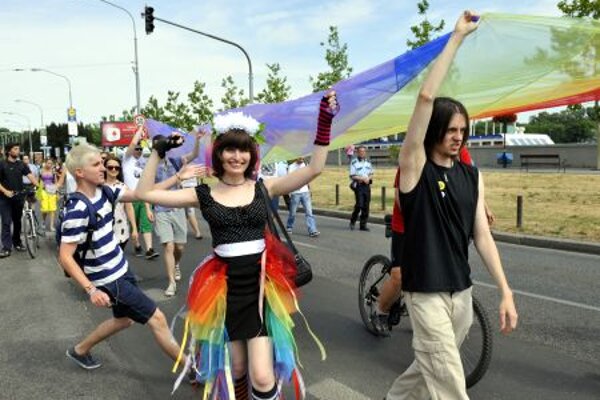 HETEROSEXUAL families and representatives of the ruling Smer party joined this year’s Rainbow Pride march, just weeks after the Smer-led Slovak parliament passed a constitutional definition of marriage that LGBTI activists have called a ban on same-sex marriage.

More than one thousand participants marched through downtown Bratislava on June 28, with security provided by around 300 police officers, who detained seven people who tried to interfere with the march. The event remained peaceful, however, and no incidents were reported, the SITA newswire reported.

In response to the constitutional provision defining marriage as a unique bond between a man and a woman passed in June, the Rainbow Pride organisers adopted the theme of family for this year’s march, calling on participants to “come out with their families” to show that there are many different kinds of families rather than the one defined by Slovakia’s constitution. The event’s spokesperson, Romana Schlesinger, pointed to the huge number of heterosexual families who joined the march, saying their presence contradicted the view that traditional families disapprove of alternative forms of families.

“It was hard to believe how many families with small children and strollers, and older people, participated,” Schlesinger told the Pravda daily. “It gives us great strength.”

The Rainbow Pride Bratislava parade unites the voices of the worldwide lesbian, gay, bisexual, transgender and intersex rights movement. It was organised by various civic associations, like the Queer Leaders Forum, the Initiative Inakosť, NoMantinels, TransFúzia and informal activists.

Despite Smer scheduling its convention on the same day as the Pride march, several people connected with the ruling party attended the rally. State Secretary of the Justice Ministry Monika Jankovská, Bratislava Mayor Milan Ftáčnik, who ran for the post as an independent with Smer’s support, and Smer MP Ľuboš Blaha appeared at the event, according to the Sme daily.

Jankovská said that although she lives in a traditional family, she is annoyed by the fact that she cannot help her friends in same-sex relationships, who are being denied the rights enjoyed by their heterosexual counterparts.

Smer’s support for the traditional definition of marriage is the result of a political agreement with the Christian and Democratic Movement (KDH), according to Blaha, who said that “homophobia promoted by the KDH for a long period” does not help Slovakia.

“Equality, freedom and love – those are basic social-democratic values,” said Blaha during his speech, as quoted by Sme.

Martin Poliačik of Freedom and Solidarity (SaS) apologised for other parliament members who accepted the constitutional definition of marriage.

“The question is not whether Slovakia will accept legislation emancipating homosexuals, but when,” Poliačik said, as quoted by Sme, adding that he does not want to wait until the European Union orders Slovakia to introduce such a law.