NEITHER the defeat of the ruling Smer’s candidate Robert Fico in the presidential election nor the waning popularity of his Smer party in opinion polls are preventing the centre-right forces on the Slovak political scene from drifting further apart. 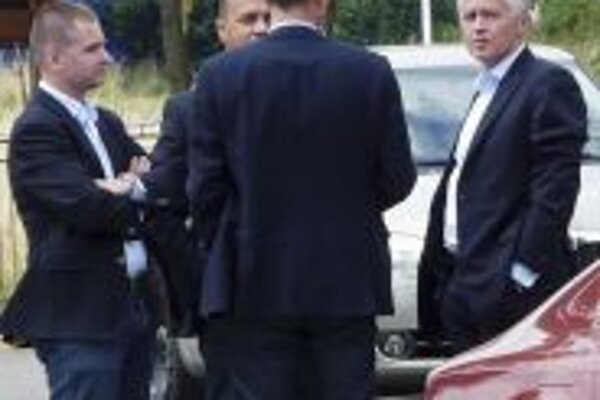 NEITHER the defeat of the ruling Smer’s candidate Robert Fico in the presidential election nor the waning popularity of his Smer party in opinion polls are preventing the centre-right forces on the Slovak political scene from drifting further apart.

And it is not just the “old” parties which have already seen more than a few departures from among their ranks, but also new arrival NOVA, as seen in a recent conflict between its party chairman, Daniel Lipšic, and the party’s liberal wing. There is also the newly-emerged Sieť of Radoslav Procházka, which has been around for just a few weeks, but has already seen its chairman bickering with Igor Matovič of Ordinary People and Independent Personalities (OĽaNO) and Richard Sulík, the leader of Freedom and Solidarity (SaS).

When Lipšic and his fellow Christian Democratic Movement (KDH) defectors announced they were founding the NOVA party in September 2012, observers said it could be a significant contribution to reviving the right-leaning forces on the Slovak political scene. Less than a year later, NOVA raised eyebrows Lipšic-Kollár: a marriage of convenience when it invited liberals grouped around Jozef Kollár to join and set up a liberal wing within the party of Lipšic, himself a known conservative.

Kollár and his fellow former prominent SaS members were then freshly out of SaS, after Kollár lost in the election of the party chairman to incumbent Richard Sulík.

A year later, the merger seems to have been less of a good idea. Voter support for NOVA is well below 5 percent (3.4 percent in the June Focus poll). At NOVA’s June 28 presidium session in Detva, the presidium members changed the party statutes, abolishing the ideological factions within the party. Also, NOVA elected three new vice-chairs at the session: Jana Žitňanská, Marcel Klimek and Gábor Grendel. The fourth vice-chair is to be nominated by autumn 2014.

Kollár and his liberal faction stood up against the change, charging that Lipšic first had the presidium dismiss 20 of its members in absentia in order to lower the quorum to be able to pass the changes. They accused Lipšic of undemocratic and authoritarian practices.

The schism between the different ideological wings was preceded by the departure from the party of conservative Milan Krajňák, a long-time ally of Lipšic, on June 26, citing differing opinions about the direction the party should take. The SITA newswire alleged Krajňák left because he did not agree with Lipšic’s intentions for the liberal wing.

Lipšic admitted prior to the presidium session that he erred last year when he invited the liberals to join his party. He told the Sme daily that his party’s result in the European Parliament elections was a disappointment and he blames this on the liberal wing of the party. NOVA won one seat in the EP, with its number two candidate, Jana Žitňanská, winning over the leader of the slate, Kollár.

Lipšic however insists that the change of statutes does not mean liberals would not be welcome in the party anymore.

The five liberal MPs have not decided yet whether they will leave the party.

Meanwhile, Radoslav Procházka, another KDH defector, after coming in third in the presidential election with just over 20 percent of the vote, founded his own party, Sieť. It was officially registered on June 12 and, not unlike NOVA, it merges politicians from both the conservative (Procházka) and the liberal side of the centre-right (mainly Miroslav Beblavý, formerly with the Slovak Democratic and Christian Union, SDKÚ). It however proves more appealing to voters, according to opinion polls, with the most recent Focus poll showing its support at nearly 16 percent.

Within the first month of the official existence of his party, however, Procházka also made some enemies with other opposition politicians. First, there was his dispute with Igor Matovič of OĽaNO, who accused Procházka of non-transparent practices in financing his presidential campaign. Their dispute, which also involved promise that Procházka would take a polygraph test to prove his claims, ended with the two politicians calling each other names and advising the other to seek medical help.

More recently, Procházka was reported to have clashed with Sulík. They fell out after SaS officially supported Procházka in his presidential bid, and he then in return endorsed the SaS slate for the EP elections.

“Before endorsing him, we wanted to know whether he understands the presidential election as an opportunity to found his own political party,” Sulík told Sme, saying that they did not believe that Procházka would found a party before the 2016 parliamentary elections. Procházka confirmed this in a written agreement, cited by Sme on June 27, with the note, however, that he will not found a new party as long as he is serving as an MP. This is also what he has been claiming publicly since his departure from the KDH in 2012. In fact, he has honoured this promise and left parliament after the May session.

“The fact that not founding a party was, orally and written, conditioned by my remaining in parliament, is indisputable,” Procházka told Sme. “If anyone decided to ignore this consciously or subconsciously, what do I have to do with that?”

Turbulent times are not over for the “old” centre-right either, particularly the SDKÚ, which once led the reformist forces after 1998. Once the strongest party, which had a prime minister (Iveta Radičová) in 2010-2012, now oscillates around 5 percent in the opinion polls, making its parliamentary future uncertain.

The SDKÚ dropped in importance after the 2012 election and its already slim parliamentary caucus lost some of its heavyweights along the way, among them former justice minister Lucia Žitňanská, who recently joined another centre-right party, Most-Híd.

More recently, the two founders of the party, Mikuláš Dzurinda and Ivan Mikloš, left. On June 27, the SDKÚ caucus elected Ľudovít Kaník as its chairman. Meanwhile, however, the party continues to crumble. On June 19, Jozef Mikuš resigned from the position of the party’s deputy chairman. The three remaining vice-chairs (Ivan Štefanec, Martin Fedor and Viliam Novotný) remain in their posts for now, although Fedor had already in May said he would give up his position after the European Parliament election. He later changed his mind, Sme wrote. He has stayed upon the condition that party chairman Pavol Frešo accepts changes to how he leads the party.

Mikuš explained for SITA that Frešo’s decision to postpone the party congress from June to September 2014 is a serious intervention in the ongoing debate.

“He postpones the solving of problems ad infinitum,” Mikuš said. “He threatens the consolidation of the party before the municipal election and unduly shortens the time necessary to prepare minutely the parliamentary election in 2016. The only chance would be to summon a congress soon, which would initiate inevitable changes within the party; but the recent events convinced me that in the top structure of the SDKÚ, the willingness to take such a fundamental step has slackened.”

The congress was originally scheduled for June 28, and was to be summoned mostly due to disagreements over Frešo’s leadership. It is expected that the delegates may call for his dismissal. Several members of the party disagreed with changing the date. Some say that Frešo does what he wants and does not lead the party as he is supposed to. Others consider it a tactical move and are afraid that this scenario may be repeated in September, as reported by TASR.

However, the dissatisfaction with the chairman has been palpable for longer, and some members indicate they want to replace him, Sme wrote. Names mentioned as potential replacements include Michal Luciak, Bratislava regional party head (proposed by all four vice-chairs), and Peter Slávik from Malacky. These have allegedly announced their candidacies. Also Ondrej Matej, Martin Fedor and Viliam Novotný were mentioned as potential successors.