LOWER gas prices, a higher minimum wage and a Christmas bonus, lower levies for mid and low income employees, the introduction of a minimum pension, the option to simultaneously receive a wage and welfare on a temporary basis and boosting the capacity of kindergartens, are all part of a package of measures that the ruling Smer party is now outlining halfway through its term. 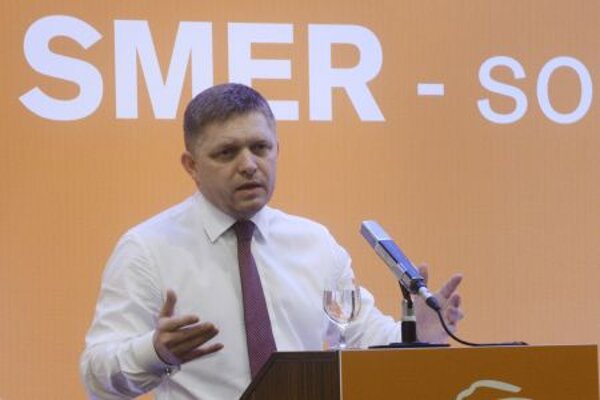 LOWER gas prices, a higher minimum wage and a Christmas bonus, lower levies for mid and low income employees, the introduction of a minimum pension, the option to simultaneously receive a wage and welfare on a temporary basis and boosting the capacity of kindergartens, are all part of a package of measures that the ruling Smer party is now outlining halfway through its term.

What Smer boss and Prime Minister Robert Fico called a post-consolidation “positive package” was approved on June 28 at Smer’s working congress and comes at a time when the party’s approval rate dropped to 32.2 percent in June, compared to its 38 percent measured in February by the Focus polling agency.

While observers described some of the measures as reasonable, they object to Smer’s failure to specify where it will get the money to finance the package, which some opposition figures have called a PR gimmick.

“This positive package will cost approximately €250 million, but we dare to do this as we have not only good consolidation under our belt, but successfully managed also the fight against tax evasion and enjoy higher income from taxes as a result,” Fico said as quoted by the TASR newswire. “This is all very good news.”

Smer maintains that Slovakia has been successful in consolidating public finances and is therefore now free to usher in measures designed to improve living standards, according to Fico.

“The package of measures is more of a pre-election type than rational,” said Vladimír Baláž, an economist with the Slovak Academy of Science (SAV), as quoted by the Sme daily, while suggesting that measures such as free trains for students and pensioners smell of populism.

Smer plans to hike the minimum wage, with Fico saying this should be the highest ever percentage growth of the net minimum wage, which in practice would mean a so-called 13th salary for those with the lowest incomes, the SITA newswire reported.

Minimum wage in Slovakia currently stands at €352 per month. Fico, however, has not specified the sum after the change. Nevertheless, according to the rules, an employee next year should see the minimum wage increase by €25 to stand at €385, according to Sme.

Mid and low-income earners will also see their levies drop, while Fico claimed that the measure would affect 800,000 employees. People earning less than the average salary in Slovakia will pay lower health contributions, which will effectively increase their salaries, while the cap should be around €565, Sme reported.

Another item on Fico’s list is the introduction of the minimum pension, with the Smer boss arguing that those who worked and paid their payroll taxes “must have guaranteed their minimum pension”. The measure should also affect current pensioners, SITA wrote.

The minimum pension should stand at around €300 per month and it is not clear whether only citizens who have worked for 40 years, as it is set under the current rules, will be eligible, or if working 15 years will be enough to qualify for the minimum pension. The average pension in Slovakia is €390, according to Sme.

The option to simultaneously receive a wage and welfare on a temporary basis has also made it to Smer’s list, with Fico arguing that “we want people to have motivation to work”. He explained that the measure would be only temporary and would involve the person receiving material need contributions even after taking on a job. The period of simultaneous payment should last for six months or a year, while the sum should gradually be cut.

“We are talking about a monthly €60,” said Finance Minister Peter Kažimír, as quoted by Sme.

Smer also wants to increase discounts for train commuters from 35 percent to 50 percent, and usher in train transport free of charge for all pensioners and students.

Smer also plans student exemptions from levies on employment agreements while also increasing the wage ceiling that such students can be paid on limited-time contracts from €159 to €200 without the duty to pay levies.

The government would also raise contributions for teachers’ assistants of mentally handicapped students, support professional education, lower taxes in the sphere of research and development and implement the option to pay VAT after payment for received invoices, TASR reported.

As of September 1, the government pledged to support young businesses and start-ups, but neither Fico nor Kažimír provided further details.

Fico has several times promised lower gas prices for households. He restated this pledge within the Smer package, suggesting that by the end of the election term the prices will decrease, though he offered no concrete sums.

“By how much will depend on circumstances, but it will be more than 10 percent,” Fico told a press conference.

The state is able to submit a price proposal, as it holds a 100-percent share in part of Slovenský Plynárenský Priemysel (SPP), which shelters gas supplies to end customers.

According to Sme, a regular household where gas is used only for cooking pays €50-€60 for gas annually.

Fico even suggested that he sees room for curbing household electricity bills, but again, offered no specific numbers.

“Unfortunately we do not have an influence on electricity because in this case the company is privatised differently,” Fico said, as quoted by SITA.

Electricity and gas prices for households dropped at the beginning of the year.

VAT will not be cut

Fico nevertheless also confirmed on June 28 that VAT would remain at the level of 20 percent and the rate will not drop.

“If you cut the VAT it does has absolutely no impact whatsoever on the prices, because merchants will not lower the prices, thus you give €200 million to the merchants,” said Fico, as quoted by SITA newswire.

Based on the law, VAT should fall back to 19 percent when the deficit dips under 3 percent. In April, Eurostat said that Slovakia’s deficit was at 2.77 percent. However, in autumn the European statistics office is to toughen its method of calculation.

Finance Minister Peter Kažimír claimed that this set of measures will not endanger Slovakia’s fiscal targets, while he estimates its costs at €250 million annually, which is about 0.35 percent of the GDP.

“It won’t be at the expense of either the deficit or the public debt. In order to embrace such an initiative, we had to put public finances to order first,” Kažimír said, as quoted by TASR, adding that the government wants to cover this with income received from fighting tax evasion.

The opposition has slammed the measures announced by Smer as populist and a start of the campaign before the 2016 parliamentary election that the taxpayers will have to pay for.

Nevertheless, leader of the opposition Most-Híd Béla Bugár said that Smer’s new measures are not systemic. He found some of the proposals useful, such as support for research. Bugár told the public service Slovak Television and Radio (RTVS) that Smer in some cases is trying to correct things it spoiled in the past, such as student exemptions from levies on employment agreements.

The government does not have money for giving away, said Peter Goliáš, head of the social-economic think-tank INEKO.

“Submitting such measures without calculation is clear populism,” Goliáš told Sme, while suggesting that the proposed measures would inflate the deficit.

Analyst with the economic think-tank INESS Radovan Ďurana said that the package needs to be complemented by realistic measures that would remove “doubts about exceeding 57-percent debt”.