THOSE who might have missed the many inspiring organ concerts during the year’s main music season need not fear: two summer festivals in the Slovak capital will celebrate this rich musical instrument. One of those, the Bratislava Organ Festival (BOF), will take place in the music hall of Bratislava Castle and the Slovak Radio’s big concert studio. 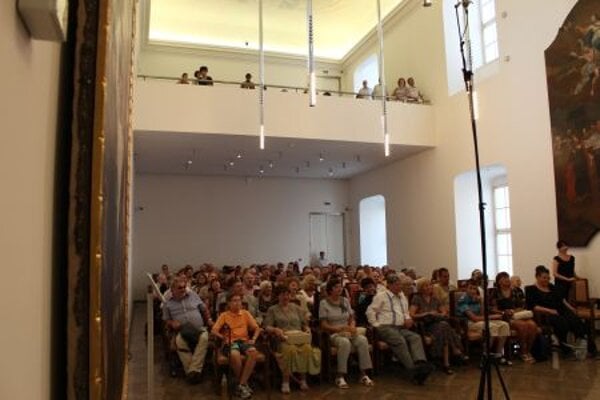 THOSE who might have missed the many inspiring organ concerts during the year’s main music season need not fear: two summer festivals in the Slovak capital will celebrate this rich musical instrument. One of those, the Bratislava Organ Festival (BOF), will take place in the music hall of Bratislava Castle and the Slovak Radio’s big concert studio.

“Since the very beginning, we wanted to expand from the Bratislava Castle and have had the ambition to spread to several venues,” organiser Marek Vrábel told The Slovak Spectator. “Last year, one concert took place in the Slovak Philharmonic, and this year, we can use the bigger organ [than the one at the castle] in the Slovak Radio,” he explained, adding that audiences can even compare the two instruments, each of which was designed specifically to fit the space.

“We have both repeated successful ideas from the festival’s second year, like the Crossover Organ, and novelties like the BOF Rising Stars. This year, we are happy to present winners of the most recent Prague Spring competition in organ and French horn: Pavel Svoboda and Kateřina Javúrková.” Vrábel added that although the instruments played by these two young, talented musicians may seem like an odd combination, brass wind instruments can, in fact, accompany organ easily, and there are scores that merge the two. Rising Stars will take place on July 17 at Bratislava Castle, featuring works by Telemann, Bach, Messiaen, Janáček, Emanuel Kaucký and Ernst Krenek.

“The Crossover Organ was started in 2013,” Vrábel continued, “and this time around, we asked young Slovak composer Lukáš Borzík to write a piece for organ and electric guitar, and apart from Marek Štrbák playing the dominant instrument, jazz guitarist Michal Bugala will perform, as well as Lenka Novosedlíková on drums and percussion. Štrbák will improvise to the music of J.S. Bach,” the organiser summed up. Bugala studied jazz at the prestigious Jazz Institute of the University of Music in Graz, Austria.

The July 20 show in the Slovak Radio’s concert hall might also appeal to fans of jazz and fusion, reaching outside the realm of classical organ.

“This year, I received the Sebastian Award for contribution to the music of Johann Sebastian Bach,” Vrábel continued, “and so I decided to do one Bach project, calling it B+A+C+H. It is interesting that Bach’s name is chromatic, consisting of four consecutive tones. Apart from the works of this musical genius, I will play ‘Four Intradas B-A-C-H’ written by Slovak Ľuboš Bernáth from the Academy of Performing Arts as a tribute specifically for this festival, and ‘Passcaglia Quasi Toccata B-A-C-H’ by Czech composer Miloš Sokola.” The “B+A+C+H Tribute” is scheduled for July 17 at Bratislava Castle.

The festival is comprised of only four concerts, but offers something for organ connoisseurs as well as jazz fans and visitors in search of atypical musical fusions. Tickets cost €5 to €7 and can be purchased via the bazaar Mjuzik on Puškinova, Hummel Music on Klobučnícka 2, or one hour before the concert at the venue.

“As for future plans, we want to continue the Crossover project in 2015,” Vrábel summed up. “And we are negotiating also with other music competitions so that we can present Rising Stars in a more official way. We definitely want to initiate new compositions by contemporary Slovak composers written on the festival order, as we have done every year, and thus to promote the most current production.”

The last concert, slated for July 20, has been cancelled due to health issues, the organisers informed. Tickets can be returend at sale points and a precise date of a compensatory concert in autumn will be announced.