WHILE the summer offers music fans the chance to see concerts outdoors, often at unusual places, early music enthusiasts can see these compositions performed on replicas of historical instruments in the kinds of venues where they were originally played: old castles and mansions. 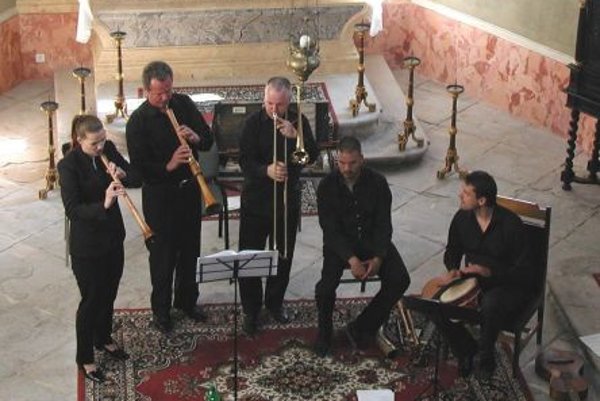 WHILE the summer offers music fans the chance to see concerts outdoors, often at unusual places, early music enthusiasts can see these compositions performed on replicas of historical instruments in the kinds of venues where they were originally played: old castles and mansions.

The Corna Musica ensemble will bring an element of romance to the summer’s musical offerings, performing early music, from the 14th-17th centuries, on a tour of old palaces, castles and mansions in western Slovakia, including Bratislava, in mid July.

The idea to play Renaissance and Baroque music on historical replicas of old instruments with exotic names, like shawm, dulcian, cornamuse and gemshorn, came from the festival’s art director, Juraj Korec.

“At the conservatory, I studied playing period instruments under Juraj Korec,” jazz saxophonist and member of Corna Musica ensemble Nikolaj Nikitin told The Slovak Spectator. “So I have been playing these old instruments for maybe 15 years and even considered making my living by playing them, although I later switched to the saxophone and jazz.”

Nikitin added that guitarist, lute player and music director Ivan Čermák has known Korec the longest, and later Agnes Ferienčíková joined them on spinet, returning this year after a longer break. Juraj Mitošinka, a big fan of period music, plays sackbut, which is a Renaissance and Baroque-era trombone. The last member is Nikola Ovčarovičová on shawm, conservatory student of Korec.

“We play on authentic replicas of old instruments,” Nikitin explained, “as these original instruments, mostly wooden wind instruments, would not have survived over the centuries.”

Corna Musica are schedule to play twice in Bratislava on July 9 and 10, followed by a show at a mansion in Lednice in the Czech Republic on July 11, with further performances in Tomášov near Bratislava on July 13, in Galanta in the neo-Gothic castle on July 16 and at a mansion in Veľký Biel on July 18. More information can be found on the ensemble’s website, and tickets for the July 10 show can be purchased via Ticketportal.

As for their repertoire, the ensemble has rehearsed original music, both religious and secular, originating from the current western-Slovak region, i.e. early German and Hungarian pieces from scores that are available to the public. “But what is sophisticated is the period instruments and the authentic interpretation that gives the performance its true depth and attraction,” Nikitin summed up.