COMENIUS University in Bratislava is celebrating its 95th anniversary this year, with the institution marking the occasion on June 26 at a ceremonial event in its main lecture hall. 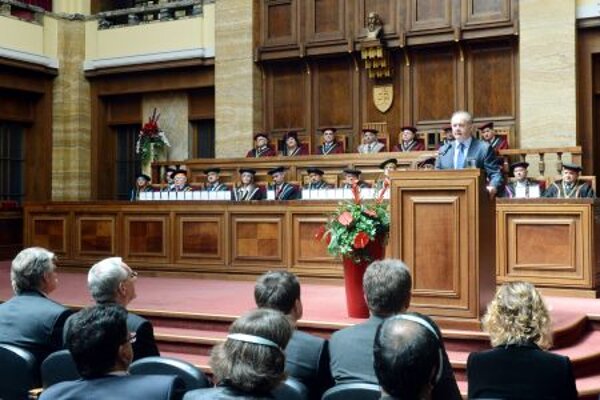 COMENIUS University in Bratislava is celebrating its 95th anniversary this year, with the institution marking the occasion on June 26 at a ceremonial event in its main lecture hall.

The establishment of the university on June 27, 1919, was significant for the development of culture, science and research in Slovakia, as the institution was the first Slovak university that enabled students to receive the highest level of education in their mother tongue, the university’s rector, Karol Mičieta, said in a speech, as quoted by the TASR newswire.

He added at the event, attended by Slovak President Andrej Kiska, numerous members of Slovak and foreign academia and diplomats, that the university is spearheading efforts with other Slovak universities to join a network of university institutions in developed European countries, especially through its involvement in international institutions that coordinate this process.

Meanwhile, Kiska, in his speech, recognised the university’s educational and scientific activities to date, putting special emphasis on those after 1989.

Only eight months after the Czechoslovak Republic was formed, the National Assembly in Prague founded the new Czechoslovak state university in Bratislava. Lectures were held in both Czech and Slovak languages, while the faculty of medicine was the first to be founded. Courses opened in autumn 1919. The university’s first rector, Kristián Hynek, was a doctor of internal medicine. While the first generation of lecturers were mostly Czech in origin, they were responsible for educating those who would later become prominent Slovak doctors, scientists and lawyers.

In 1919 there were only five Slovak engineering graduates, but in 1936-38, Slovakia had its own intelligentsia.

The Czechoslovak Republic ended abruptly with the Second World War, when the country was divided. The wartime Slovak state sought to abolish academic freedoms and the free elections of academic dignitaries, and pushed through its own political agenda in the university.

In 1950, the new communist regime introduced its ideology and political cleansing into the university. Nevertheless, Comenius continued to educate experts in many spheres of science and culture, with new faculties gradually appearing, the last being the The Faculty of Mathematics and Physics in 1980, after being separated from the Faculty of Natural Sciences.

After the fall of communism, all ideology was cleared from the curricula and the university rejoined the European academic community.