WITH Italy taking its turn at the helm of the EU presidency for the next six months, the presence of Italian culture in Slovakia will be richer than usual. 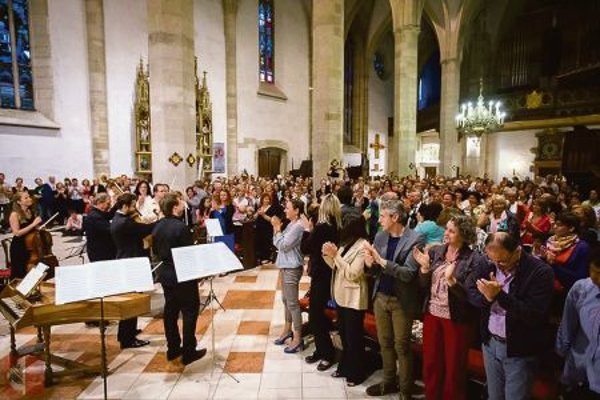 WITH Italy taking its turn at the helm of the EU presidency for the next six months, the presence of Italian culture in Slovakia will be richer than usual.

The impact of Italy’s presidency was already felt in late June in the annual festival of Italian culture, Dolce Vitaj. Presenting various facets of Italian culture each year, the 2014 edition offered a photo exhibition, a film festival, four concerts encompassing different genres, and two culinary events, including a wine festival and a model of a typical Italian market.

Dolce Vitaj’s events also ventured outside the capital, and this year the Viva Italia festival celebrated Italy’s culture, wine and gastronomy in Poprad on June 18-22. In Zvolen, the annual Zvolen Castle Plays featured in late June the works of opera maestros Donizetti, Rossini and Verdi, as performed by Slovak artists.

In Žilina, an art exhibition opening on July 15 will present the 20 Italian regions as seen through the eyes of 20 artists who explored the nation’s cultural identity.

Opening Dolce Vitaj on June 3 was the exhibition Oscar Portrayals, featuring the work of prominent photographer Lucia Gardin, the daughter of an Italian father and a Slovak mother. Her photographs, exhibited in the Dvorana exhibition hall of the Culture Ministry, included photo studies of famous actors, celebrities and Slovak intellectuals.

The festival’s launch this year also featured a concert in the Primate’s Palace by soprano Cristina Ferri, with Simone Maria Marzialli on piano, performing arias of Italian opera masters Puccini, Verdi, Mascagni, Donizetti and Leoncavallo, as well as works by Hungarian operetta composer Franz Lehár. Ferri’s occasional banter with the crowd and singing from an intimate distance made the show a special occasion. However, her powerful operatic voice seemed at times almost too forceful for the room’s excellent acoustics.

Other projects of the festival included Cine Vitaj, an overview of Italian film, on June 5-8, featuring 13 films. The event was held at Pisztory Palace on Štefánikova Street, although its smaller screening room seemed a bit too small for the quality of the films shown there.

Vino Vitaj celebrated Italian wine on June 6 in the streets of downtown Bratislava, while the traditional Italian market brought a touch of the country’s atmosphere to the weekend of June 20-22.
The concert of the band Gabin in Design Factory on June 13 presented the music of this Italian nu-jazz ensemble to Bratislava.

“The concerts of Gabin at the Design Factory, the concert Stradivari at the cathedral of Saint Martin and the concert of Roberto Cacciapaglia have been very successful,” head of the Italian Cultural Institute in Slovakia, Antonia Grande, summed up shortly after the festival. “But the exhibition of Lucia Gardin at the Ministry of Culture and the cinema festival Cine Vitaj were very successful as well.”

Grande explained that the Stradivari concert on June 17 was a tribute to renowned Italian violin maker Stradivari aka Stradivarius, whose high quality instruments are appreciated the world over by musicians and collectors.

The head of the Italian Institute noted that Stradivarius’ hometown of Cremona, with its numerous violin workshops, was included on UNESCO’s list of intangible cultural heritage.

The show featured Slovak virtuosos performing on these finely crafted Italian instruments: Dalibor Karvay played a famous Stradivarius dating from 1685; Peter Baran performed on a Lorenzo Ventapane cello from 1830; and talented 13-year-old Ferdinand Slezák played a new violin made by Marco Osio. The value of these instruments is in the millions of dollars, and their sound and quality paired with the skill of the performers and the atmosphere of the cathedral created a special experience.

With free admission, the church was packed and the musicians’ performances elicited football-stadium like ovations, with the audience refusing to leave before an encore of a Bach composition. The programme included works by Albinioni, Vivaldi, Bartók, Paganini and Gounod’s Ave Maria, as well as Czech musician František Benda and contemporary Slovak composer Iľja Zeljenka (Musica Slovaca). They were accompanied by the Chamber Orchestra Sinfonietta Bratislava.l

Marcel Richters from Vienna, a Stradivarius expert, explained to the audience the value and mystery surrounding old Italian violins: “Unlike other instruments that last for a mere 100-200 years, the best violins are equally good, or even better, after 400 years – and will probably sound better also after another 500 years.”

Karvay, a talented and respected Slovak violinist, added that even the best new violin cannot compare to a Stradivarius or other old instruments played for 300-400 years by the most gifted musicians, pulling from them a unique energy, timbre and tone.

“The concert of Roberto Cacciapaglia at the Radio Hall Auditorium on July 3 has been one of the most successful events,” Grande said about the concert that marked both the end of Dolce Vitaj and the beginning of Italy’s EU presidency.

Also, Italy could not resist the opportunity to get involved with Košice’s European Capital of Culture 2013 project last year. “Italian composer Stefano Giannotti … [wrote] a composition for the opening ceremony of the project Košice ECOC 2013, and Roberto Micconi participated in the Ivan Sokol Organ Festival,” Grande told The Slovak Spectator, noting that Micconi is a composer, director and organ player at St Mark’s Basilica in Venice.

When asked how the success of the 2014 Dolce Vitaj festival will affect plans for next year’s edition, Grande said, “We never repeat the same events. There will be some changes next year.”

Current and upcoming Italian cultural events include a photo exhibition in the local library in Liptovský Mikuláš; the art exhibition 20in1, opening on July 15 at the Považie Gallery in Žilina; the open-air festival Viva Verdi in August in Trnava and Nitra; a concert by Gabriele Marinoni on August 17 within the Kremnica Castle Organ festival; concerts by organist Alessandro Bianchi in Rožňava and Košice on September 12 and 14, respectively; and the concert of Luisa Sello with the Slovak Chamber Orchestra Bohdan Warchal in the Reduta building of the Slovak Philharmonic on October 26. Future events can be followed at iicbratislava.esteri.it, or on the websites of the festivals or organisers.

“The Italian Presidency has many priorities, and among them are the shaping of a common European identity in the globalised world and the relation of Europe with the world,” Grande summed up. “As we believe that culture has a major role in enhancing our European links, we put a lot of importance on culture and, therefore, the Italian presidency of the European Union will be accompanied by many cultural events throughout the year. The Slovak audience will understand and appreciate this.”