WHILE scything was once the only way to cut grass in meadows to feed cattle and livestock in the winter, nowadays it is an old tradition revived in competitions. 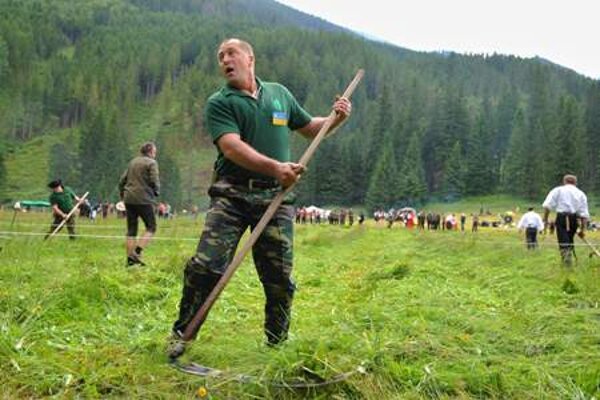 WHILE scything was once the only way to cut grass in meadows to feed cattle and livestock in the winter, nowadays it is an old tradition revived in competitions.

On June 27, professional foresters from Slovakia, Poland and Ukraine competed in a manual scything competition, in the 10th year of the Tatranská Kosba (Tatra Scything) event. Contestants were to scythe strips of grass 50 metres long and 4 metres wide, which were then to be processed as quickly as possible.

Of the 30 harvesters, Bohumír Gazda and Radoslav Michalec from the Oravice branch of State Forests of the TANAP national reserve won, in 5.44 minutes, followed by Ľuboš Lónsky and Marián Bugaj from Slovak Forests Banská Bystrica, and Andrzej Staszel with Andrzej Goldyniak from Poland’s Tatra National Park, the Sme daily wrote.

Professional foresters from Slovak Forests from Námestovo, the Town Office from Spišská Belá, Forests of Kežmarok, the company Slovwood from Ružomberok, and Uzhgorod Forests from Ukraine also competed.

“Apart from the efforts to preserve the mountain meadows because of rare Tatra meadow flowers, we also try, through scything and mulching, to preserve the meadows for wildlife as natural pastures and for tourists as sites of relaxation, while also aptly completing the landscape image of the natural habitat of the Tatras,” deputy head of the State Forests of TANAP, Pavo Fabian, told the SITA newswire. This year, foresters will scythe or mulch 300 hectares of meadows, thus producing almost 1,000 quintals of hay and about 1,200 rolls of haylage to be served as food to forest game and a herd of Hucul ponies.

The second event saw people from all over Slovakia scything meadows by Vlkolínec, near Ružomberok, on June 28.

“We have organised the event mainly to revive folk traditions in Vlkolínec, to increase awareness and education about environmental behaviour,” Václav Kusko of the gardening club in Ružomberok told SITA. “The event is a competition, open for both men and women, with part of the programme consisting of demonstrations of folk crafts and a performance of a folklore ensemble.”