THE REMOVAL of the stone pillars of the Old Bridge in Bratislava had to be suspended after pyrotechnics experts discovered unexploded bombs from the Second World War just beneath the surface of the Danube River. 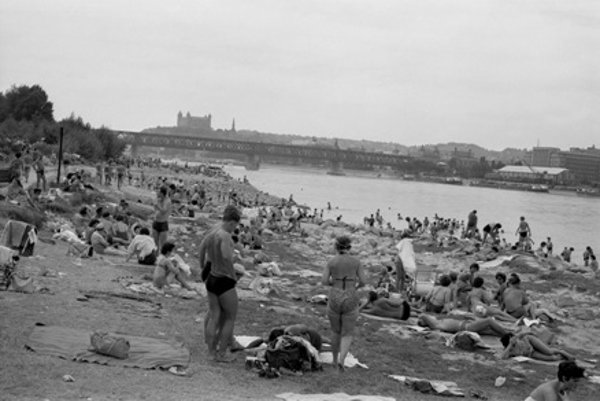 THE REMOVAL of the stone pillars of the Old Bridge in Bratislava had to be suspended after pyrotechnics experts discovered unexploded bombs from the Second World War just beneath the surface of the Danube River.

Apart from various wooden bridges and a short-lived pontoon bridge in the 15th century, the Old Bridge was the city’s first fixed bridge to cross the Danube. In 1852, a pontoon bridge was built starting in what is now Ľudovít Štúr Square, in front of the Slovak National Gallery, but it lasted only until 1891.

A new bridge was built downstream in 1889-1890, leading from what is now Šafárikovo Square, first called the Ferenz Jozef Bridge, after an Austro-Hungarian Emperor, and later the M.R. Štefánik Bridge. In the first Czechoslovak Republic, the bridge carried a railway track to Vienna, Austria. The rails were also used by Bratislava trams.

Before Slovakia’s liberation in WWII, on April 3, 1945, the fleeing German army destroyed the steel bridge and one of its pillars. The most recent Old Bridge was built by the Soviet Red Army, and although it was meant to serve only temporarily, it remained in use for all vehicles until 2008, and was used as a pedestrian bridge until 2013. At 460 metres in length, the Old Bridge conained a wooden foot path and a single-track railway, which, oddly, had no continuation on either end by the time it was demolished.

The bridge is to be rebuilt as part of a project to improve and redirect Bratislava’s city transport. The project’s first phase involves extending the tram line from Šafárikovo Square across the Danube, via a newly built bridge, to Bosákova Street in the Petržalka borough. Plans also call for relocating the old tram and bus stops in Šafárikovo Square to Bosákova, where trams will make a u-turn back into downtown.

Plans also include the reconstruction of Štúrova Street, Šafárikovo Square and the Bosákova-Jantárová crossing, and building a cycling path from the Old Bridge to the Eurovea shopping centre.

“Currently, the city is taking steps – together with experts who solved similar situations in various European regions – that would confirm or exclude the presence of dangerous ammunition in the Danube,” spokesman of the Bratislava mayor’s office, Ľubomír Andrassy, told the TASR newswire.
While this means work on the bridge has been temporarily halted, other parts of the project are continuing ahead as planned, he added.

Head of media communications from the Bratislava municipality, Bratislava Daniela Rodinová, listed the reconstruction of Šafárikovo Square, preparing the subsoil in Petržalka for the tram tracks and work on the Artmedia and Einsteinova overpasses as projects which are currently underway.