LOCAL media have recently drawn attention to the financing of new non-parliamentary political parties, which must make ends meet without contributions from the state, unlike the parties represented in parliament, as well as those which won 3 percent or more of the vote in the parliamentary election. This comes in light of concerns raised over the financing of unsuccessful presidential candidate Radoslav Procházka, and the subsequent financing of his new party, Sieť. 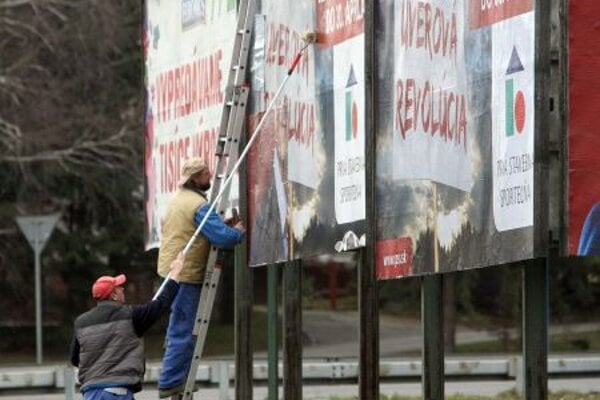 LOCAL media have recently drawn attention to the financing of new non-parliamentary political parties, which must make ends meet without contributions from the state, unlike the parties represented in parliament, as well as those which won 3 percent or more of the vote in the parliamentary election. This comes in light of concerns raised over the financing of unsuccessful presidential candidate Radoslav Procházka, and the subsequent financing of his new party, Sieť.

The Sme daily requested detailed data on the income and spending of the three most visible non-parliamentary parties: Sieť, Daniel Lipšic’s NOVA, which recently won a seat in the European Parliament, and TIP, a party that emerged before the EP elections but failed to win any seats.

All the parties claim they are relying on gifts and membership fees, but only NOVA provided Sme with the details of its books.

NOVA posted income of €232,000 last year, most of which was from gifts, with only about €7,000 coming from membership fees, Sme reported. Two companies have contributed to the running of the party, and one of the gifts came in the form of free-of-charge leasing of two cars.

The party’s costs include renting its premises, about €20,000 per year, and another €20,000 goes to the salaries of the party employees, Sme reported. NOVA has spent about €250,000 on billboard campaigns.

The Pravda daily, however, called NOVA’s funding “strange”, claiming that the party’s founders did not have to reveal all of their financial resources. Some of the initial funds were poured into the party through the Sen pre Slovensko (A Dream for Slovakia) civic association, which virtually disappeared after the party emerged, Pravda reported. The association and the party reside in the same building. The finances flowing through the association have not been disclosed, since this is not obligatory.

Four founding members of NOVA donated money to the association: besides Daniel Lipšic, also current deputy chairs Gábor Grendel, Marcel Klimek and Jana Žitňanská. In the founding process the party received €83,500 from someone who was not a member of the founding committee, Pravda claims.

“Data about the income and the expenses of the movement have been published, as stipulated by the law, in its annual report, which was approved by a randomly selected auditor,” the press department of NOVA told Pravda regarding its financing.

Sieť and TIP secretive about their expenses

Meanwhile, Sieť and TIP did not disclose to Sme the detailed expenses of their operations. Both parties say that for now they are being financed through gifts and membership fees.

Still, founding a new party is not a cheap endeavor, Sme noted in its report, quoting Richard Sulík, who established the Freedom and Solidarity party in 2009. While the administrative fees prior to officially registering a party reach about €1,500, after being officially registered a party needs to have at least one administrative staff member and a permanent address. Sulík estimates these costs altogether at about €10,000. If the party wants to run a decent billboard campaign when it is founded, its costs can go up to €60,000 or so.

Procházka and his Sieť have been stressing their intention to finance the new party from a bank loan. Sme, however, found that banks are not eager to lend money to political parties. Some, like the ČSOB, VÚB and UniCredit, do not lend to political parties at all in order to distance themselves from politics. Other banks prefer granting loans to well-established parties with a solid financial background.

Sulík admitted at the beginning of his party’s operation that he had even encountered problems when trying to open a bank account for a political party.

“For the bank it is a risk if the party is financed only from membership fees or gifts that do not need to be considered regular income for paying off the loan,” an anonymous risk-manager at one of the banks told Sme.

It is quite different when there is a guarantor for the loan.