THE CONSTITUTIONAL definition of marriage, which some gay-right-advocates openly called a ban on same-sex marriages, does not go far enough, some conservative activists say, as they gather signatures to force a referendum that would make the laws even stronger. 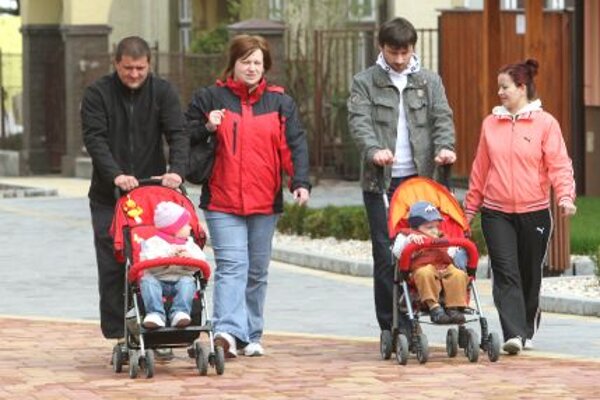 THE CONSTITUTIONAL definition of marriage, which some gay-right-advocates openly called a ban on same-sex marriages, does not go far enough, some conservative activists say, as they gather signatures to force a referendum that would make the laws even stronger.

Behind the referendum initiative is the Alliance for Family (AZR), which declares itself a non-partisan and non-religious organisation and which emerged during the preparations for the September 2013 March for Life as an alliance of dozens of pro-family organisations. It has collected over 300,000 signatures under its petition, which needs to be signed by 350,000 citizens in order to be binding for the president to hold a referendum. The AZR hopes to achieve this aim by the end of this summer, the Sme daily reported. The referendum could possibly be held together with the November 15 municipal elections.

Against gays and sexual education

When the AZR launched its petition on April 5, they did so claiming that none of the current efforts of Slovak politicians to secure better protection for marriage and family fulfils the aims of the AZR to the full extent. The AZR remains on this position despite that fact that on June 4, parliament adopted a revision to Slovakia’s constitution, which among other things defines marriage as “a unique bond between a man and a woman” and adds that “the Slovak Republic thoroughly protects marriage and pursues its good”.

The AZR wants to go further than that in the name of the protection of the interests of children who they say have the right to grow up in a family with a father and a mother, and to be protected from what they call inappropriate sexual education in schools.

The referendum on the protection of family that the AZR’s petition promotes should include the following four questions: Do you agree that no other cohabitation of persons other than a bond between one man and one woman can be called marriage? Do you agree that same-sex couples or groups shouldn’t be allowed to adopt children and subsequently raise them? Do you agree that no other cohabitation of persons other than marriage should be granted particular protection, rights and duties that the legislative norms as of March 1, 2014 only grant to marriage and to spouses (mainly acknowledgement, registration, or recording as a life community in front of a public authority, the possibility to adopt a child by the spouse of a parent)? Do you agree that schools cannot require children to participate in education pertaining to sexual behaviour or euthanasia if their parents or the children themselves do not agree with the content of the education?

Constitutionality of the questions

The president is not obliged to announce a referendum automatically when he receives the petition signed by at least 350,000 citizens, but the constitution binds him to make sure that the petition is constitutional, as well as the referendum questions.

“The president has the right to request a statement whether it is possible to hold a referendum on the given questions,” Peter Petrus, President Andrej Kiska’s spokesman, told Sme.

While the AZR claims that all the proposed questions have been assessed by constitutional lawyers as eligible to be asked in a referendum, some lawyers have suggested there might be problems. Constitutional lawyer Peter Kresák sees a potential problem with the questions dealing with a ban on adoptions for same-sex couples, as he told Sme, giving an example of a parent in a same-sex couple who might be the child’s biological parent, and thus cannot be denied the right to raise his or her child.

While the initiative of the AZR is non-political and officially not associated with any figures from political life in Slovakia, several politicians have signed the petition. Christian Democratic Movement (KDH) Chairman Ján Figeľ is among them, even though he originally said the referendum was unnecessary after his party had the constitutional revision passed.

Along with Figeľ, other prominent conservative figures, including a number of Slovak Catholic bishops, have signed.

The Roman Catholic Church has been eagerly endorsing the referendum initiative from its very start. After the petition was launched, some Slovak churches have displayed information leaflets about the petition on their premises.

Based on the 2011 census, 62 percent of Slovakia’s inhabitants say they belong to the Roman Catholic Church, while more than 10 percent are Christians belonging to other churches.

If the AZR succeeds in collecting the necessary 350,000 signatures in time, they aim to have the referendum held together with the municipal elections on November 15.

Kiska has also previously said that if he should announce a referendum, he prefers to do it so as to coincide with the elections, in order to save costs.

Slovakia has only seen one successful referendum in its history since 1993: the referendum on joining the European Union. More than 52 percent of voters participated in the plebiscite in 2003 and more than 90 percent of them said yes to Slovakia’s EU membership.