ONE ART festival that happens to take place outside the Slovak capital occurs in a city usually associated with cars, industry and a transport-focused university: Žilina. 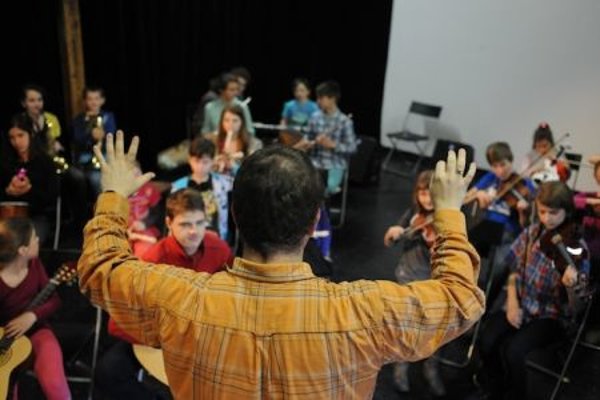 ONE ART festival that happens to take place outside the Slovak capital occurs in a city usually associated with cars, industry and a transport-focused university: Žilina.

The KioSK festival, dubbed the “festival of new Slovak theatre and dance”, takes place in late July in the Stanica Žilina-Záriečie cultural centre, and offers a wide range of events. For foreigners, it has one big advantage: most of the events involve non-verbal arts and performances. KioSK presents on July 24-27 a programme including dance, different theatre genres, interactive installations, light design, cabaret, multi-media performances, contemporary children’s opera, films, a disco, a circus workshop for children, and much more.

Some of the events originated in the Stanica Žilina-Záriečie, while others premiered there. Two such works are the second part of the Painted Bird trilogy, called Amidst, and the contemporary opera 2’16” and-half Space Odyssey.

The first part of Painted Bird had its world premiere in Žilina, while the second part (each of them is a separate work of art, author Pavel Zuštiak stresses) premiered in the Baryshnikov Arts Center in New York, where Slovak choreographer Zuštiak now lives and works. Since its 2011 premiere, it ran in several venues in the US, and only now comes to Slovakia, to the site where Painted Bird I was born.

Painted Bird was inspired by a novel by Polish author Jerzy Kosinski set during the Second World War, but Zuštiak said that the theme of being uprooted and looking for a sense of belonging intrigued him as a youth growing up in a communist country, who later went to the Netherlands and Canada when developing his dance talents.

The first part, called Bastard, features a single dancer who is later surrounded by a crowd of local volunteers, who may even outnumber the audience and blur the distinction between who is who.

This second part takes place “among the audience, as the name suggests”, Zuštiak told The Slovak Spectator, adding that in an open space without seats, viewers are encouraged to freely move among three performers (Lindsey Dietz Marchant, Nicholas Bruder and Pavel Zuštiak), three playing musicians and four video screens.

“Amidst has a reference to the first part, where about 60 performers flood the stage,” choreographer, dancer and director Zuštiak said. “Here, audiences members themselves are becoming the crowd and gradually they indirectly become participants in the performance. Amidst focuses on nostalgia as a vicious circle (symbolically and literally); the place where a man is attached to what was, or to what will be; unable to settle in the current moment. In this part, we can find the issue of otherness, the efforts to belong and to fit in, to find a true connection to the people around, to pin the gloomy burden of the past and the desire to get free of it.”

Zuštiak stressed “there is no text used in the piece; the only point when it appears is the screening of a dot that comes above the ‘i’ in the word ‘CITY’, which then morphs into the word ‘ATROCITY’”.

The performance, scheduled for July 26 at 19:00 and 21:30, is technically advanced, with the video screening using photographic material created by Robert Flynt, video-design by Keith Skretch and light design by Joe Levasseur. Live music was composed by Christian Frederickson, Jason Noble (1972-2012) and Ryan Rumery, and is played live by Christian Frederickson, Ryan Rumery and Andrew Carlson.

Another performance that breaks with tradition is a contemporary opera, which was rehearsed not only with musicians of the Slovak Philharmonic, but also – and most importantly – with children. Composer and conductor of the opera, Marek Piaček, trained (with the help of Zuzana Kolenová) the children, who were selected in an audition, and the piece premiered in early May 2014, in Stanica Žilina-Záriečie.

“The biggest challenge when working with a children’s orchestra composed of more than 20 children is to achieve silence,” Piaček confessed in the text promoting the opera. “In this sense, rehearsing the famous 4’33” composition of John Cage is less achievable than to rehearse Bach’s concerts on one hand, and Schoenberg’s dodecaphony on the other hand.”

The children’s opera was made through cooperation between children and professional musicians. It was organised within the Karaoke Europe project, which connects the artistic activities of four different cultural organisations from Europe, including the Stanica, Archa theatre from the Czech Republic, PanoDrama from Hungary and 50 Kwartier from the Netherlands. Their main theme is participative projects, working with various minorities and socially excluded communities.

“The result can be a nice surprise,” the operaslovakia.sk website wrote about the recently premiered opera. “It is authentic and oscillates between classical music and contemporary bustle, with the main axes of the plot being silence and children’s ghost stories; the sounds that appear are meant to fill the pauses and gaps between them.”

More information on the whole programme of KioSk can be found at kioskfestival.sk.