ANY single event where it is possible to see the Slovak president, the Stanley Cup, alternative rock band Travis, a Ukrainian symphonic orchestra and more is worth checking out. 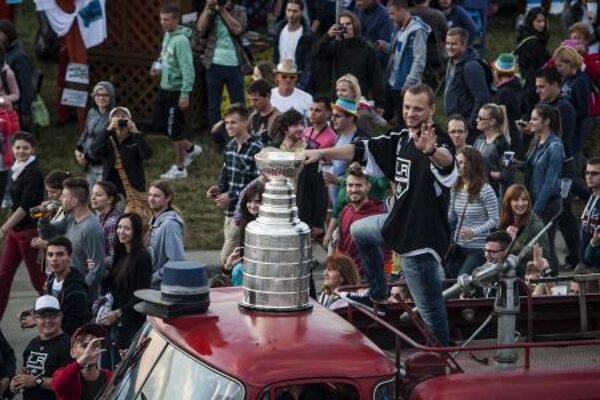 ANY single event where it is possible to see the Slovak president, the Stanley Cup, alternative rock band Travis, a Ukrainian symphonic orchestra and more is worth checking out.

While in 2013, Pohoda, which has a capacity of 30,000 people, almost sold out, this year organisers estimate that 1,000-2,000 fewer people came. Festival CEO Michal Kaščák said that unpleasant weather forecasts might have discouraged some potential visitors from buying tickets which increased in price from €49 to €119 as the festival approached, the SITA newswire reported.

“This was another wonderful edition with many intense moments,” Kaščák told the media during the final press conference. “We are happy that the festival’s running was trouble-free and we believe that people together experienced three nice days.”

Organisers had promised a surprise, which turned out to be an appearance by President Andrej Kiska, who engaged in a debate with Týždeň Editor-in-Chief Štefan Hríb. Former prime minister Iveta Radičová was in the audience, and went for a walk around the premises with the president after the show. Aside from journalists, the duo was accompanied by throngs of young people, according to the TASR newswire.

“One feels trust, support, and that is an enormous commitment to go forward and work hard,” Kiska said, as quoted by TASR. “It’s recharging my batteries [being at the summer festival], but mainly it is a responsibility.”

Kiska also congratulated Marián Gáborík, who plays for the Los Angeles Kings of the National Hockey League and came to the main Pohoda stage with the Stanley Cup. He later took the cup atop a fire department truck for a ride around the airport.

“I must admit that this is my first time at Pohoda and I would never have expected this,” Gáborík said to the audience, as quoted by TASR. “But I guarantee you this is not the last time.”

As in previous years, Pohoda offered an array of side events, including workshops, discussions, and theatre and literary programmes. This year, organisers created a so-called Sagan Fan Zone, where people could watch live-streamed performances of famous Slovak cyclist Peter Sagan participating in the Tour de France, or speak with his family members.

Also, more than 60 artists performed in the literature tent of bookshop chain Martinus, including novelist, dramatist and TV screenplay writer Radka Denemarková, famous Slovak humorist and actor Milan Lasica and writer Dušan Mitana. The biggest draw was expected to be writer Etgar Keret, who has been nicknamed the Israeli Tarantino, but he decided to stay at home with his family because of the current Israeli–Palestinian conflict, according to the Pohoda webpage.

For the first time, the Federation of the Jewish Communities in Slovakia participated in the festival, organising various events such as debates, kosher cooking and trainings in the Israeli martial art of Krav Maga. Furthermore, Týždeň weekly organised several debates about education, journalism, the mafia and criminality.

Even Travis front man Fran Healy expressed his appreciation of the work of the organisers during his performance.

“We thank the organisers of this festival,” Healy shouted on stage. “We received tasty food and they have totally clean toilets.”