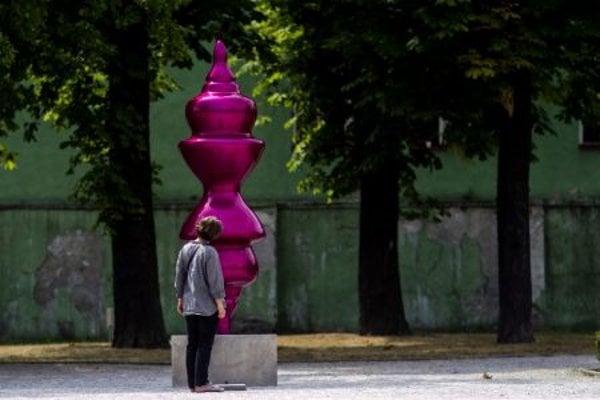 “Statue and Object” 2014 in the garden of the Grassalkovich Palace (Source: Sme – Vladimír Šimíček)
Font size:A-|A+0

Starting with the bad (to end on a positive note), it should be said that the usually rich offer of outdoor statues in various sites of the Slovak capital has been relegated to the garden of the Presidential Palace. Although the statues must compete with the garden’s permanent fixtures, they do so with ease in the pleasant city space.

In the first years, organisers tried to spread the works in the wider public space, in the streets of the Slovak capital, the Sme daily wrote, adding that it ended up, however, with vandalism and statues being destroyed, and so they ‘retreated’ to the garden adjacent to Presidential Palace, which is guarded.

The good news is that the statues – and objects – are plentiful, and some have been selected for indoor spaces, with even some bigger galleries participating this year, and with cultural centres offering works by national artists. Polish sculptor Jan Pamula is presented in the Polish Institute on SNP Square 27, and the works of Austrian Peter Paszkiewicz can be seen in the Austrian Cultural Forum in the Astoria building on Suché Mýto.

In the Z Gallery in Zichy Palace on Ventúrska, the statues of Dutch artist Roland de Jong are on dislpay.

A special exhibition dedicated to the Visegrad Group (Slovakia, the Czech Republic, Poland and Hungary), called Vizitáció – V4 – Vizitácia, can be seen in the Umelka Gallery of the Slovak Association of Visual Arts on Dostojevského Rad 2. In the exhibition hall of the University Library on Ventúrska, the Socha S.EM exhibition from an international symposium, conceived by Kata Kissoczy + Ateliér .EM can be seen, with the artists being Martti Aiha (FIN), Roland de Jong (NL), Kata Kissoczy (SK), Viktor Frešo (SK), Ľubo Mikle (SK) and Rasťo Trizma (SK).

Slovak sculptors, both living and deceased, are represented in the Umelka Gallery, including the works of Peter Roller, while the huge objects made from one piece of wood by Ľubomír Purdeš can be seen in the Statua Gallery in the Pálffy Palace on Zámočnícka 47.

The Nedbalka Gallery on the street of the same name (Nedbalova) has offered a selection of sculptors’ works from its collection, with big names appearing on the list, while the Bratislava City Gallery (GMB) presents the works of renowned 20th-century Slovak artist Jozef Kostka in the Pálffy Palace on Panská 19.

“In nine spaces in downtown Bratislava, about 70 artists exhibit their works,” organiser Viktor Hulík concluded for the TASR newswire. “The one open space is in the Grassalkovich Garden [of the Presidential Palace], where big-format works by several sculptors can be found. These were made by Slovaks Slavomír Gabriška, Richard Keťko, Kata Kissoczy, Andrej Margoč, Matúš Maťátko, Ľubo Mikle, Juraj Rusňák, Laco Sabo and Dionýz Troskó; and two Czechs – Antonín Kašpar and Laco Sorokáč; as well as Dutch Riki Mijling.”

Some of the exhibitions last for a few weeks, while most of them can be seen until August 24.