HALF A million euros. That is the amount Radoslav Procházka quoted when asked by Igor Matovič about the costs of his presidential campaign, on a recording that has been anonymously published on the internet. Officially, Procházka’s campaign costs are half that sum, and the emerging leader of the centre-right denies that it could be otherwise. 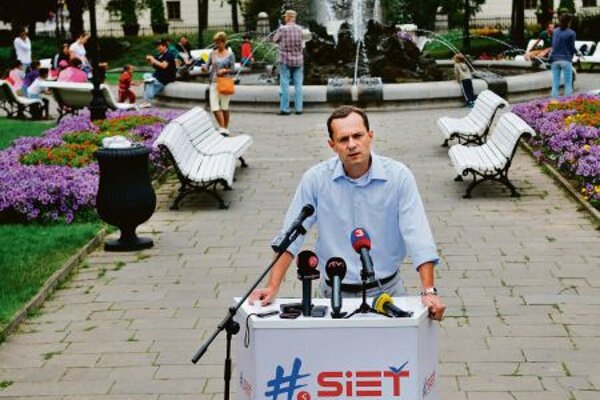 HALF A million euros. That is the amount Radoslav Procházka quoted when asked by Igor Matovič about the costs of his presidential campaign, on a recording that has been anonymously published on the internet. Officially, Procházka’s campaign costs are half that sum, and the emerging leader of the centre-right denies that it could be otherwise.

The recording appeared on vimeo.com on July 22 and was forwarded to the Sme daily anonymously. It contains segments of a discussion between presidential candidate Procházka and Ordinary People and Independent Personalities (OĽaNO) leader Matovič, annotated by Matovič.

Matovič previously admitted that he had recorded the conversation with Procházka, but has denied publishing it. He says he had the recording ready and was waiting for the General Prosecutor’s Office, which is currently handling the case, to allow him to publish it.

The General Prosecutor’s Office has been involved in the dispute since early June, when Matovič first came to the media with information that Procházka wanted to purchase advertising from his family-owned company off the books. General Prosecutor Jaromír Čižnár has ordered the prosecution to review the case.

“The General Prosecutor’s Office will not specify the actions it is taking,” the office’s spokesperson Andrea Predajňová said, as quoted by Sme.

“How much do you estimate by the end of the first round?” Matovič asks Procházka on the recording. “About six hundred,” Procházka responds, saying that he had spent about half of that so far. Later he adjusts his estimate to €500,000.

The whole Procházka-Matovič controversy arose on June 2, when Matovič accused Procházka of attempting to purchase campaign ads from Matovič’s family-owned company, Regionpress, off the books.
Matovič alleged in front of journalists that Procházka suggested he should pay 50-90 percent of the total sum for the desired service in cash without a receipt. The actual total cost of what he should have paid amounts to €17,200 with VAT. The ads were to be published in an advertising newspaper delivered to households around Slovakia free of charge.

Matovič said he turned the request down.

On the recording, Procházka can be heard saying he wants to pay only half officially and the other half unofficially, since “in such volume there is simply no one to check it”, as reported by Sme.sk.
The voice later says that the percentage is not important, and that he is willing to accept 90 percent of the sum going unregistered. The two voices also discuss publishing spending on the campaign on a transparent account and whether the ad has to be reported to the Finance Ministry.

Procházka admitted that the voice on the recording is his, but accused Matovič of heavily editing the conversation.

“DJ Matovič had this ready from the beginning as a classic provocation,” Procházka told journalists, adding that the provocation did not work.

Procházka said he wanted to spend half a million on his campaign, but did not manage to raise that amount and thus had to cut back on his campaigning.

Regarding the horse-trading about what percentage of the sum should be paid on the books, Procházka said the percentages were referring to possible discounts he could get from Regionpress and whether the sum of the invoice could be paid in instalments.

Procházka said he would be happy to be interviewed by the General Prosecutor’s Office regarding the matter.

Originally, on June 3, Procházka admitted that although he sought to run his campaign via the transparent account at all times, “a few thousands euros” might have gone astray. He blamed his campaign chief Martin Dubéci and staff member Andrej Zmeček for this.

“I gave the guys a telling off for this,” said Procházka, as quoted by the TASR newswire, adding that he had explicitly told them to fund everything only from the transparent account. The “guys” only wanted to help him, however, he said.

Procházka claims that all donations he received have been listed on the report for the Finance Ministry. He said he was only aware of €20,000 going over and above the official account.

Matovič responded to Procházka’s allegations that he manipulated the recording by asking Procházka to give his consent to publish the unedited recording to prove there was no manipulation.

Yet, if Matovič publishes the recording without Procházka’s consent, he could face criminal prosecution.

By recording his private conversation with Procházka, Matovič might have committed the crime of violating the privacy of verbal expression. To press charges against him, however, the prosecution would have to prove that Matovič published the recording or that he used it in some other way to cause harm, lawyer with Transparency International Slovensko Pavel Nechala told Sme.

MP Miroslav Beblavý, who recently co-founded the Sieť party with Procházka, suggested earlier that Matovič has violated the law on conflict of interests by representing Regionpress and negotiating business deals and prices in the company’s name. As a parliamentary deputy, Matovič is not allowed to be involved in conducting business.

Matovič maintains that he is not a formal representative of the company and he does not run the business in his own name, and that the law allows him to act as an adviser to his former company, TASR reported.

The co-founders of Sieť have so far stood by Procházka, who is the party’s face. Beblavý is currently abroad and has not commented on the recent developments. Previously, he repeatedly stated that he was not involved in the campaign in any way and that he is focusing on the present financing of the party that he has co-founded with Procházka.

Andrej Hrnčiar, the mayor of Martin and a former Most-Híd MP who left parliament with Procházka when they founded Sieť, also stressed that he did not participate in the campaign. In an interview with Sme he said he trusts Procházka when he says the campaign only cost €250,000.

“He did not have the economic background that would allow him to put together a team of professionals and he was doing many things by himself,” Hrnčiar told Sme, adding that unlike other presidential candidates, Procházka was negotiating campaign-related things on his own.