THE JULY 17 downing of Malaysia Airline flight 17 (MH17) continues to reverberate as European Union foreign ministers were still engaged in discussions about boosting sanctions on Russia when The Slovak Spectator went to press. In Bratislava, leaders were sending mixed messages. 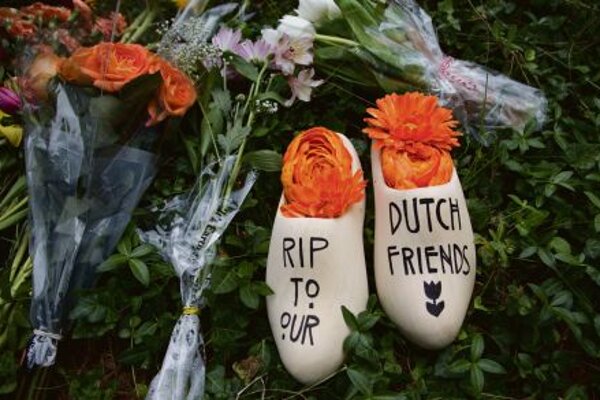 Of the 298 peoplewhodied in the plane crash, most were Dutch. (Source: AP/TASR)
Font size:A-|A+0

THE JULY 17 downing of Malaysia Airline flight 17 (MH17) continues to reverberate as European Union foreign ministers were still engaged in discussions about boosting sanctions on Russia when The Slovak Spectator went to press. In Bratislava, leaders were sending mixed messages.

The plane was shot down over eastern Ukraine, killing all 298 people on board. The governments of Ukraine and the United States allege that Russia provided the SA-11 missile system that brought the plane down. Photos from the crash site show puncture holes on the exterior of the plane that push inward, something experts say is consistent with a missile strike, not an explosion from inside the fuselage.

After meeting with his German counterpart on July 23, President Andrej Kiska said that “sterner sanctions as the result of a joint EU approach represent an incredibly important step”, according to the TASR newswire. Meanwhile, Foreign Minister Miroslav Lajčák has exhibited a more cautious tone, indicating he is wary of the blowback increased sanctions on Russia would have.

At the US Embassy in Bratislava, Chargé d'Affaires Norman Thatcher Scharpf called for a “credible international investigation” of the MH17 disaster. A lengthy statement released by the US Embassy on July 22 noted that evidence “indicates that Flight MH17 was shot down by an SA-11 surface-to-air missile from separatist-controlled territory in eastern Ukraine”.

“Video posted on social media on Saturday show an SA-11 on a transporter travelling through the Krasnodon back to Russia,” the statement continued. “The video indicated the system was missing at least one missile, suggesting it had conducted a launch.”

“We concurred that the top priorities at the moment are the need to ensure a dignified process of identification of bodies and their return to home states; unimpeded and full access to the crash site and an objective investigation into the circumstances of the crash,” he said on July 22 in Brussels, as quoted by TASR.

“If these conditions and expectations, as defined by EU leaders, are not met, the EU is ready to embrace further sanctions,” Lajčák continued.

Among the topics being discussed was an arms embargo on Russia, though the Russians are actually net arms exporters. Even those sanctions are likely to apply only to future arms deals and French President Francois Hollande says that his country will proceed with delivering the first of two French-made warships ordered by the Russians.

In addition to arms, high tech and energy sectors are under discussion as possible targets for sanctions. As of press time, it appeared any additional sanctions agreed upon would not kick in for days in an attempt to allow the Russian government an opportunity to change course instead.

“Slovakia is ready to be part of the European decision to apply further sanctions but, as I already said today, everyone needs to shoulder their part of their negative impact,” said Lajčák. “This means we shouldn’t make rash decisions.”

The investigation into MH17’s demise continues. Following days of delay, rebels in eastern Ukraine allowed the victims’ bodies to be transported to the Netherlands, where many of the passengers came from. The flight was en route from Amsterdam to the Malaysian capital of Kuala Lumpur.

The so-called black boxes that contain information about the flight’s final moments have been turned over, but the field of debris on the site where the plane came down remained under rebel control as of press time. Two Ukrainian Su-25 fighter jets were shot down on July 23, with Ukrainian authorities claiming that weapons fired from Russian territory brought them down.