FAILED presidential candidate Pavol Hrušovský might wrap up his political career with the prestigious post as head of the government audit office – a job that has remained vacant for the past two years. 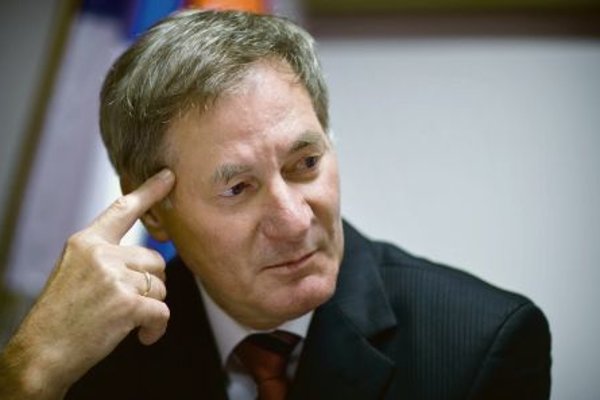 FAILED presidential candidate Pavol Hrušovský might wrap up his political career with the prestigious post as head of the government audit office – a job that has remained vacant for the past two years.

After five unsuccessful votes, a number of failed candidates and a change in the rules whereby the ruling Smer party turned the ballot for the head of the Supreme Audit Office (NKÚ) to a secret one, the NKÚ top post remains vacant.

The NKÚ is a state office that is established by the constitution as “an independent body in charge of overseeing the management of budgetary resources, state property, property rights and state claims”. The NKÚ is currently headed by Ján Jasovský, who was elected to the post in 2004 as a nominee of the then-opposition and now obsolete Movement for a Democratic Slovakia (HZDS) party. His term expired in February 2012.

Based on an unwritten tradition, the NKÚ top post should be filled by an opposition candidate, but so far the ruling Smer party has refused all the candidates put forward by the opposition on the grounds that either they were not qualified or experienced enough for the post, or that they did not possess unanimous support among the opposition.

This time around, the Christian Democratic Movement (KDH) is likely to propose its prominent member, and a former parliament speaker, who recently received just 3.4 percent of the vote in the presidential election.

Some Smer representatives have already admitted that Hrušovský might be a suitable candidate to get their support in the parliamentary vote.

The KDH board is expected to approve Hrušovský as their candidate at its session in August, the SITA newswire reported as it broke the news on July 22, but no official statements have been made.

Žilinka was the last of the string of candidates proposed by the opposition, running for the post in May 2013 with the support of the KDH, the Slovak Democratic and Christian Union (SDKÚ) and Most-Híd, at that time grouped within the People’s Platform, an umbrella group that fell apart after the presidential election in the spring of 2014.

The Platform, however, withdrew Žilinka from the vote after Smer changed the rules of the vote, making it secret, a step the opposition disapproved of.

The sixth attempt to elect the NKÚ head, this time in the form of a secret ballot, was to take place at the parliament’s session in March, but Paška did not announce it, arguing that the opposition did not propose a relevant candidate.

Prior to the series of votes, PM Robert Fico said his MPs will only support a candidate who receives unanimous opposition support. Parliament failed to elect Kamil Krnáč and then Vladimír Klimeš, nominated by Freedom and Solidarity (SaS), after MPs from Ordinary People and Independent Personalities (OĽaNO) did not vote for them and Smer withdrew its support, citing a lack of unified support among the opposition.

Fico then proposed that each opposition party nominate its candidate and Smer would select from among them, before finally coming up with his own list of candidates. On April 3 he proposed three opposition-linked names: Peter Mach, who previously ran the statistics authority; Béla Angyal, the former boss of the Public Procurement Office; and the one-time director of the SIS intelligence service, Karol Mitrík. The second alternative, according to Fico, was for the opposition to agree on a candidate who all the parties are willing to support.

Smer in, SaS out

This, however, no longer seems to be a requirement, particularly when it comes to Hrušovský as the potential candidate. Several Smer members have commented that he might be able to get the support of the party’s 83 MPs even if the opposition is not united in its support for him.

“Mr Hrušovský has the advantage that he is an experienced, established politician; we all know him,” Smer MP Miroslav Číž told Sme, adding that if it is only the SaS whose support is missing, Smer will definitely consider Hrušovský as a candidate.

SaS has expressed strong reservations against Hrušovský, calling his nomination “a bad joke”, which, however, “fits well into the strategic union between Smer and the KDH”.

“The NKÚ should be led by a dynamic person with knowledge of economics, not burdened by various dark comradely trades with the ruling party,” said SaS Chairman Richard Sulík, as quoted by SITA.

SaS and other opposition parties have recently been critical towards the KDH for its political agreements with Smer, most recently the constitutional amendment that parliament passed in May, introducing a traditional, conservative definition of marriage in the text of the constitution and a number of reforms in the judiciary. The KDH’s political rivals have repeatedly suggested the movement was preparing grounds for a ruling coalition with Smer after the 2016 elections. The KDH has denied the allegations.