THE REACTION among the Slovak population of Austria-Hungary to the assassination of Franz Ferdinand and his wife was mainly one of shock combined with terror. His death dashed many Slovaks’ hopes that the successor to the throne would grant them autonomy from Hungarian rule, and left little room for enthusiasm about the upcoming war. Nevertheless, tens of thousands of Slovaks fought and died in the First World War. 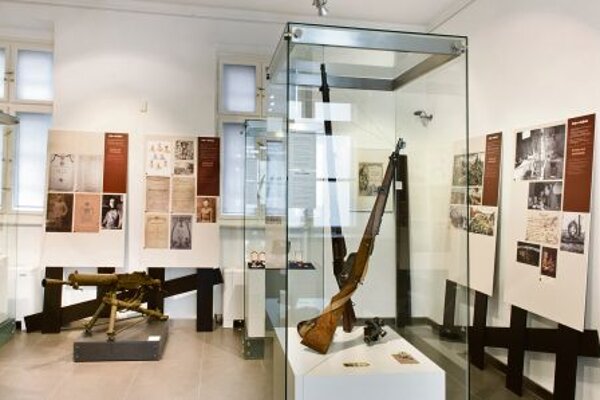 THE REACTION among the Slovak population of Austria-Hungary to the assassination of Franz Ferdinand and his wife was mainly one of shock combined with terror. His death dashed many Slovaks’ hopes that the successor to the throne would grant them autonomy from Hungarian rule, and left little room for enthusiasm about the upcoming war. Nevertheless, tens of thousands of Slovaks fought and died in the First World War.

“There was no war enthusiasm among all the population whatsoever; that’s a myth that was cultivated in past decades,” historian Gabriela Dudeková of the Institute of History of the Slovak Academy of Sciences told The Slovak Spectator. Some people succumbed to nationalism and propaganda and were eager to fight, chanting “Down with Serbia! Glory to the war!” But this was but a small segment of the country’s citizens, mainly the Magyar and German nationalists in bigger cities, Dudeková noted.
“In small towns and in the countryside fears of the war prevailed,” Dudeková said. Families worried about how they would survive without their breadwinners, who were recruited into the army.

Among Slovaks, sympathies towards Serbs as a fellow Slavic nation within the monarchy played a role too, and that was another reason why they resented the war. Soon enough, after the war officially started on July 28, 1914, laws were passed that classified any public resistance towards the war as high treason, Dudeková said.

The Slovak National Party proclaimed political passivity as of August 6, 1914, to last until the end of the war, as a measure to prevent the persecution of Slovaks. The resistance movement only existed illegally and it was not until May 1, 1918 that the Slovaks first officially declared their intention to join Czechs in a new state, according to Dudeková.

The passivity of the Slovak political representation was also the reason why the mobilisation went rather smoothly among Slovaks, said Peter Chorvát, a historian from the Institute of Military History. All in all, Slovaks made up about 3.6 percent of the whole Austrian-Hungarian army, according to Chorvát.

Slovaks in the Habsburg army

“The vast majority of them were those of the regular contingents of recruits, since young Slovak men were not interested in the career of military officers,” Chorvát told The Slovak Spectator.

There are, however, no exact statistics on the Slovaks who fought, only estimates which suggest that about 400,000 of them fought in the war. About 69,000 died in the conflict, and a similar number of soldiers returned home with permanent disabilities, according to Chorvát.

“In the initial stage of the war Slovaks, as the members of the Austrian-Hungarian army, were evaluated positively,” Chorvát said. “At the end of the war, the fatigue and exhaustion showed through, which was, however, typical for other nationalities too.”

There were several revolts by Slovaks in the army towards the end of the war, with the best-known among them being the rebellion in Kragujevac in 1918, which resulted in 44 officers being executed.

About 10,000 Slovaks, however, fought on the side of the Allies too, mostly in Russia, where about 6,000 Slovaks were part of Czechoslovak foreign legions, according to Chorvát.

The Czechoslovak Legions were voluntary military forces, mainly in Russia, France and Italy, and their leading personality was General Milan Rastislav Štefánik, who organised Czechs and Slovak volunteers in the French army during the war. Štefánik is considered one of the founders of the Czechoslovak Republic.

The importance of the legions lied in the fact that they supported the émigré Czechoslovak government, and thus contributed to Czechoslovakia being on the winning side at the end of the war.