DESPITE an influx of graduates in the labour offices, the jobless rate dropped in June, though only slightly. Observers predict that it will continue to decrease and by the end of the year it may stand at 12 percent. 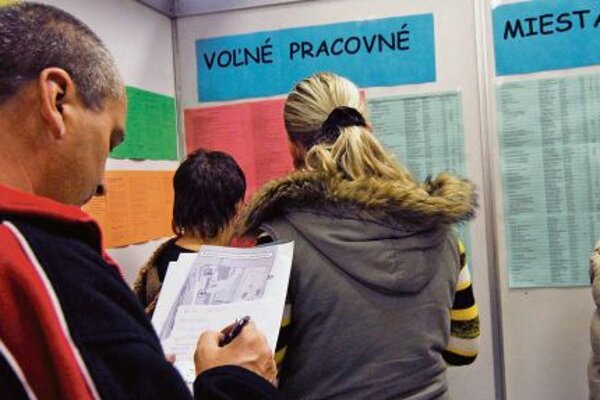 More jobs were offered to the unemployed in June. (Source: TASR)
Font size:A-|A+0

DESPITE an influx of graduates in the labour offices, the jobless rate dropped in June, though only slightly. Observers predict that it will continue to decrease and by the end of the year it may stand at 12 percent.

The unemployment rate reached 12.78 percent in June, down by 0.02 percentage points compared to May. In annual terms, it dropped by 1.47 percentage points. The number of jobless ready to take a job immediately was 345,013, which is 474 fewer than in the previous month. Compared to June 2013, the number of unemployed decreased by 39,683 people, the statistics of the Central Office of Labour, Social Affairs and Family (ÚPSVaR) showed.

Labour Minister Ján Richter noted that the downward trend in unemployment continued in June, although the month was characterised by an inflow of fresh graduates into the registers of labour offices.

“For the past five years, the trend was always the opposite,” the minister said, as quoted by the SITA newswire. “We have turned it around this year, although the drop was by only two hundredths of a percent.”

Richter pointed out that of the 24,000 job seekers removed from the registers last month, 16,400 found a job on the labour market. He further said that even in the case of disadvantaged groups the trend is positive. The number of long-term unemployed decreased in monthly terms by 1,618 people (to 209,363) and in the category of people aged over 50, labour offices registered 1,555 fewer unemployed (down to 93,807), SITA reported.

Despite positive trends in the labour market, youth unemployment still remains problematic. The labour offices registered 4,400 new young jobless aged 29 and under in June, Richter said. Their number stood at 119,409.

“However, year-on-year there were almost 15,000 fewer of them, but still, despite the positive trend, these are worrying numbers,” Richter said, as quoted by SITA.

Ľubomír Koršňák, analyst with UniCredit Bank Czech Republic and Slovakia, said that the youth unemployment statistics were affected mostly by university graduates, whose number increased by 1,000 in May and June.

One reason for this may be the lack of a connection between the labour market and schools, said Luboš Sirota, head of McROY Group recruitment agency. According to him, the problem of the poor structure and low quality of Slovakia’s education system cannot be resolved from one day to the next.

“It is not enough to do cosmetic changes to decrease graduates’ unemployment; it is necessary to change this area comprehensively,” Sirota said, as quoted by the TASR newswire.

Richter told the press on June 21 that he wants to meet Education Minister Peter Pellegrini in order to make systemic changes. He wants to talk about the results of the analysis, which his ministry prepared in cooperation with labour offices and which showed, among other things, that graduates from certain specialisations struggle to find work. Richter added that a big number of graduates from technical schools also end up at the labour offices, as reported by the Pravda daily.

According to Michal Páleník from the Employment Institute, there are two factors for the increasing number of unemployed university graduates: their share of the total population is increasing, while there are not enough new jobs for them to take, Pravda wrote.

According to Sirota, solutions to tackle youth joblessness should include a more flexible Labour Code, a decrease in the costs of employers connected to working on limited time agreements (so-called “na dohodu”), and a change in the conditions for establishing and financing secondary vocational schools, TASR wrote.

The unemployment rate dropped mostly due to an increase in the number of registered jobless who found a job, Koršňák wrote in a statement sent to media.

The analysts with the National Bank of Slovakia (NBS) also praised the increase in the number of vacant jobs, which may also be reflected in the following months, as reported by TASR. Other positive factors include the launch of projects to support regional employment and employment of young, as well as a declared increase in hiring people for so-called activation work, NBS analysts claimed, as cited by TASR. On the other hand, the unemployment development may be negatively affected by the slower economic growth of Slovakia’s business partners and in the global economy.
All in all, analysts predict the jobless rate may drop by the end of the year to 12 percent.

“Seasonal work should push the unemployment down also in the following months, by September, when the influx of secondary school graduates temporarily stops the seasonal drop in unemployment,” Koršňák wrote in a statement sent to the media. “The rising economy, however, should create space for the continuation of a slight decrease also in seasonally adjusted unemployment.”