HEAVY storms on the evening of July 21 caused flooding which destroyed dozens of cars and the road leading from Terchová village to the Vrátna Dolina, a valley in the Malá Fatra mountains. The nearby city of Žilina had problems with torrential rain, reporting flooded cellars, roads and pavement. 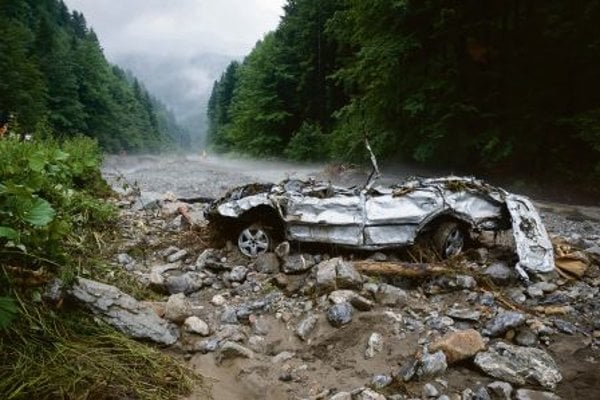 Around 40 cars were damaged or completely destroyed in Vrátna Dolina valley during a torrential rain in 2014. (Source: SITA)
Font size:A-|A+0

HEAVY storms on the evening of July 21 caused flooding which destroyed dozens of cars and the road leading from Terchová village to the Vrátna Dolina, a valley in the Malá Fatra mountains. The nearby city of Žilina had problems with torrential rain, reporting flooded cellars, roads and pavement.

“The water was falling down; it was making noise like a starting jet plane,” local hunter Ján Vallo, who was in Terchová during the storm, told the Sme daily.

About 100 firemen and 30 mountain rescuers were searching the car wreckages to make sure there are no trapped or dead people inside, head of the Fire and Rescue Corps Alexander Nejedlý told the SITA newswire. Rescue worker Jozef Mičo added that he and his colleagues checked around 40 destroyed or damaged cars but no injured or missing people were found. Since no missing persons were reported in the first three days after the storm, there is a low chance that it claimed any lives, according to Mičo.

In Vrátna the storm dropped 66 millimetres of rain per square meter, meaning 66 litres of water fell on each square meter over the course of about an hour. However the biggest damage, which reaches €5 million, according to Terchová Mayor Milan Laurenčík, was caused by an avalanche of rocks, mud and wood. Laurenčík explained that 50 hectares (123 acres) of hillside were part of the slide, according to the Pravda daily.

Mountain rescuers had to assist around 120 tourists, including children, infants and a pregnant woman who were trapped in Vrátna. Since the road was destroyed they were forced to walk through the forest at certain points.

“Adrenaline gave us strength during the most terrible moments,” Kristína Vagaňová, who was caught by storm in Vrátna with her five-month-old daughter, told Pravda. “I have never been so terrified as I was on Monday.”

The five kilometre long road was reconstructed two years ago for several million euros via funds from Brussels. This is the biggest damage on a third–class road in Žilina Region ever, Juraj Blanár, the head of Žilina Self-Governing Region, told Pravda.

However, the storm affected the whole region. Landslides on sections of the Hromové and Steny hills struck cars and trapped people in huts and houses. In the town of Považská Bystrica, the flood destroyed a 700-metre long stretch of road.

Dozens of people were left stranded on the ridges of the Malá Fatra, but no injuries or fatalities related to flood were reported as of the evening of July 24. In Žilina, traffic lights stopped working, homes were without power and the 158 hotline for calling police ceased to work.

“There was complete darkness for one hour; I have never seen such a storm,” said 57-year-old Žilina resident Mária Krchová, as quoted by Pravda. “It was raining terribly; it was impossible to leave the building and walk the streets.”