BRITAIN’S culture and lifestyle have found a receptive audience in Slovakia. The year 2013 brought a milestone marking the 20th anniversary of relations between independent Slovakia and the UK, resulting in a range of British cultural events. 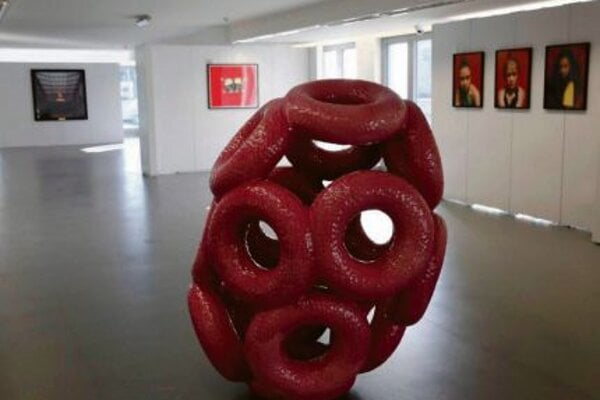 BRITAIN’S culture and lifestyle have found a receptive audience in Slovakia. The year 2013 brought a milestone marking the 20th anniversary of relations between independent Slovakia and the UK, resulting in a range of British cultural events.

“To celebrate 20 years of Slovak–British relations, the British Council joined forces with the British Embassy on the GREAT boat, where we led activities for Slovak schools,” head of the British Council (BC) in Bratislava, Alena Rebrová, told The Slovak Spectator. “The kids and the students had a GREAT time – they told us as they were leaving the boat.”

The boat, called GREAT, cruised the Danube River between October 1 and 7, 2013, arriving at the Slovak capital on October 2. In the morning, students saw a photo exhibition from the UK by Slovak photographer Ivan Janko, listened to a traditional Scottish bagpiper and learned about British historical personalities. In the afternoon, the Slovak public was invited onto the boat for the cultural programme, and in the evening a festive reception for invited guests celebrated the 20 years of bilateral relations between the UK and Slovakia. The boat visited Slovakia (as well as Vienna and Budapest) as part of a global marketing campaign of the UK, called ‘This is GREAT’, to support economic growth and boost the number of tourists, students and investors who choose the UK.

The year 2013 was crucial for Slovak culture, too, with the eastern-Slovak city of Košice becoming the European Capital of Culture 2013. This project offered a host of events, and naturally, the British Council was not going to miss out.

“There was a massive British presence at the PLACE! International Conference on Creative Industries and City Image in Košice’s Kasárne Kulturpark venue,” the head of the BC in Slovakia said.

“Enthusiastic participants with the help of international experts explored what is essential for prosperous and imaginative places, what the attributes are of those lucky cities, where the economy is growing and where talent is nurtured, where there is a culture of creativity and few urban or social problems. Real examples from Košice, case studies from other places and critical questions were openly discussed.

In addition, the importance of marketing and branding was examined to show how successful stories contribute to developing successful cities.”

The British Express exhibition in Košice in mid November was subtitled Contemporary British Art after Warhol, offering an overview of contemporary British visual art that merged various mediums like media, pictures, video and spatial installations in the Kunsthalle, a former swimming pool-turned-art gallery.

“The British Express exhibition was another key project,” Rebrová said. “The works came from the British Council collection, comprising over 9,000 works of British art. For more than 60 years, the BC has been collecting works of art to promote the very best British artists, craftsmen and designers. This collection has no permanent gallery and has been referred to as a ‘Museum without Walls’.”

The British Express was curated by Slovak Vladimír Beskid, who travelled to London and selected works of 25 British artists. The visitors could see pieces by such prominent artists as Damien Hirst, Tony Cragg, Antony Gormley and Martin Parr.

“We are very proud that in support of the European Capital of Culture Košice 2013, we were able to help and present one of the biggest visual art events involving UK works in Slovakia in years,” Rebrová added.

One of the BC’s biggest initiatives in recent years was in the sphere of fashion.

When Dana Kleinert of The Slovak Fashion Council (SFC) was asked by the Slovak Spectator about how the cooperation between her organisation and the BC began, she said, “It was quite logical. The British Council organises a competition worldwide called Young Creative Entrepreneur, and in 2011 I won it for Slovakia as a young designer, with a one-week stay in London being part of the award. The targeted stay was about how to boost and be a part of innovation and the creative industry, and how to support parts of the fashion and design industry, etc.”

Kleinert further explained how she felt the need to establish an umbrella project covering all elements in the fashion and design industry, and toward that end, she has been supported by the BC, and co-founded the Slovak Fashion Council.

“We are really delighted to see that with our work in Slovakia we have been able to inspire people to do new things or to be pioneers,” Rebrová said. “The SFC has now developed into an effective independent body, which looks after the interests of Slovak designers, fashion professionals and producers.”

The SFC started organising a full-fledged fashion conference in which one British tutor participates each year.

“We also helped with the fashion conference called Are You Ready? For Fashion, by bringing over UK fashion expert Hannah Middleton,” Rebrová specified. “Hannah has been a fashion buyer and has been teaching related subjects at UK universities. She shared her know-how about expanding into international markets.”

The SFC has been an active participant in the International Fashion Showcase in London, she continued, which is an annual festival of emerging designer talents that champions fashion as a cultural expression.

“Coinciding with London Fashion Week, the 2014 International Fashion Showcase in London was the biggest yet, with six Slovak designers featured,” the British Council’s head summed up.

Kleinert explained that the conference expanded to the streets of Bratislava in the form of the Fashion March, which presented designers’ works that could then be purchased within the ‘Designer Showrooms’ (which took place between May 1-4 in Bratislava’s Kontakt venue).

“In 2014, we joined forces with the Czech Republic and Hungary and presented our three countries jointly at the International Fashion Showcase, calling the presentation Voyage through Central Europe, ” she said.

Kleinert concluded that the conference is slated for 2015, too, and preparations for a Slovak presence at the London event are underway. The SFC has also started to present its work to the Slovaks via the media, the show at the conference and other activities, like Slovak Fashion Week, which connects professionals with the wider public.

“We were involved in numerous activities and initiatives over the year,” Rebrová said of late 2013 and the first half of 2014. “We worked together with a couple of Slovak ensembles to commemorate the centenary of the birth of Benjamin Britten (1913–1976) and as a result, Slovak audiences could hear his music at events such as the Konvergencie Festival.”

As for other activities, she mentioned “the vivid Slovak start-up scene” and the Honest conference on innovation and creativity. The British Council launched – with authors Zuzana Slobo-dová and Zuzana Fried-Prei-ssová, the book Volá Londýn: Na vlnách BBC a Svobodné Evropy in Slovakia on the history of Czech and Slovak broadcasting on the BBC.

An artistic highlight was the performance of the Akram Khan Company. Khan is one of the most acclaimed choreographers of his generation, Rebrová said.

“He confirmed his excellent reputation with iTMOi [in the mind of Igor] which we saw in the Slovak National Theatre (SND) in Bratislava,” she said. “The fact that the Slovak dancer Andrej Petrovič, who’s been with the compa-ny since 2007, acted as an assistant choreographer in iTMOi and made the performance even more attractive.”

As for future events and projects, Rebrová said that they will continue collaborating with FM Radio to deliver the radio show The Selector to Slovak listeners, which brings the best and newest British music every week. “Moreover, the British Council teachers now entertain listeners of FM Radio with a 15-minute dialogue in English on cultural differences between Slovakia and the UK every week,” she said. “Needless to say, British humour is a staple part of the entry.”

“After the success of this year’s Literature Night with Richard Stanke and Roman Luknár reading from Julian Barnes’ Levels of Life, when we simply couldn’t accommodate all the people who wanted to hear the readings, we are looking forward to next year to see which new book will be translated from English into Slovak,” Rebrová said about another success of British culture in Slovakia.

A second batch of the British Council Film Collection, a series of short documentaries from the BC archi-ves made in the 1940s, will be released in 2014, she added.