WHILE the United Kingdom is already a significant trade and investment partner of Slovakia, both sides continue to further intensify bilateral economic relations. The launch of the British Slovak Business Centre and the June visit of the Slovak economy minister to the UK are some of the latest impetuses for strengthening relations. 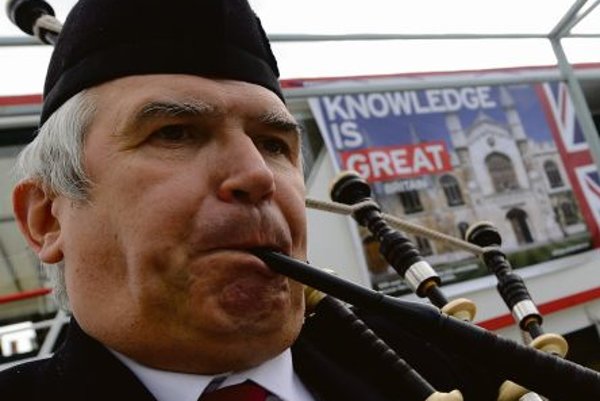 The GREAT campaign is a tool to enhance relations between Slovakia and Britain. (Source: TASR)
Font size:A-|A+0

WHILE the United Kingdom is already a significant trade and investment partner of Slovakia, both sides continue to further intensify bilateral economic relations. The launch of the British Slovak Business Centre and the June visit of the Slovak economy minister to the UK are some of the latest impetuses for strengthening relations.

“Slovakia is Britain’s close partner in a wide range of areas, including cooperation on the EU economic policy issues, foreign trade and foreign direct investment flowing both to Slovakia and to the UK,” Peter Repka, the head of trade and investment department at the British Embassy in Bratislava, told The Slovak Spectator. “There is a close relationship between the people of the UK and Slovakia – whether through the 70,000 British tourists who visit Slovakia each year or the 200,000 Slovaks who live in the UK.”

But while trade relations between Britain and Slovakia are good, there is always room for improvement, according to Repka.

British-Slovak trade turnover amounted to €3.63 billion in 2013. Slovakia’s exports to Great Britain amounted to €2.983 billion, leaving the trade balance in a €2.34 billion surplus for Slovakia, according to the Slovak Statistics Office.

With regard to factors that have the biggest impact on British-Slovak economic cooperation, Christopher Plant, CEO of the newly launched British Slovak Business Centre and the Executive Director of the British Chamber of Commerce, said that Slovakia’s strongest trade partners – namely Germany, the Czech Republic, Russia, Austria and Hungary – have been principally facilitated through government initiatives and historical circumstance.

“Given the United Kingdom’s ambitious and focused programmes geared towards boosting the country’s international profile in central and eastern Europe, we are likely to see a greater competitive edge from the British government,” Plant told The Slovak Spectator. “The British government has established a new trade-oriented business facility in Slovakia, the British Slovak Business Centre (BSBC), and has provided the BSBC and the British Government UK Trade & Investment (UKTI) teams with further tools and resources to enhance economic cooperation.”

The British government and the British Chamber of Commerce launched the BSBC in Bratislava in an effort to boost British business in Slovakia.

Opened on March 5 in the presence of British Minister of State for Trade and Investment Ian Livingston and with active services since April, the BSBC helps connect British companies to Slovak business opportunities. It provides assistance, support and unique services to British SMEs looking to export their products and services to the Slovak market.

“The BSBC is charged with showcasing Slovakia as a country of commercial opportunity for British business,” said Plant. “Interest is garnered principally through the formation of trade partnerships, pursuit of import/export opportunities, and trade consultancy. The BSBC’s mission is to assist the UK government in reaching its global goals of boosting UK exports to GBP1 trillion, helping 100,000 new UK companies export and doubling UK foreign direct investment to GBP1.5 trillion by 2020.”

According to Plant, interest in Slovakia as a trade partner is steadily rising as conditions in the United Kingdom and in Slovakia continue to facilitate growth.

“Central and eastern Europe is a hospitable, local and ideal region of opportunity, and Slovakia is increasingly popular for foreign trade thanks to ongoing efforts by UKTI and the British Slovak Business Centre,” said Plant.

According to Repka, while Germany, the Czech Republic and Russia are traditionally the strongest economic partners in Slovakia, there is huge potential for the UK in matching its competitors’ trade with this market.

“Britain wants to be competitive here,” said Repka. “UK companies are major investors in Slovakia and the strong UK presence in Slovakia is already quite visible.”

UKTI has identified and has been focusing on six economic sectors in which it sees opportunities for cooperation with countries of central Europe, including Slovakia: energy, infrastructure, engineering, services, life sciences and security.

“We hope that UK suppliers offering products, innovative technology and services in these areas will be able to benefit from the many opportunities that the Slovak economy offers,” said Repka.
According to Repka, the GREAT campaign is another tool to further enhance economic and wider relations between Slovakia and Britain.

“The objective of GREAT is to promote British business, economy, culture and heritage overseas,” said Repka, adding that this worldwide campaign was launched by the British Government in February 2012 and introduced to many key markets. In 2013 the GREAT campaign came to central Europe, including Slovakia. In March this year the British Minister of State for Trade and Investment Lord Livingston, led a trade mission to Slovakia of 35 UK companies, organised under the GREAT banner.

Based on data of the National Bank of Slovakia, total foreign direct UK investments in Slovakia amounted to €423.85 million, making the UK the 15th biggest investor in Slovakia. There are 503 companies, whose parent company is from Great Britain, Richard Dírer from the Slovak Investment and Trade Development Agency (SARIO) specified for The Slovak Spectator.

“The interest of investors over the last year was similar to the previous year,” said Dírer. “British investors explore new markets especially when they are looking for new clients and with this they also expand their production to these markets. British investors continue to be interested in investing in the CEE.”

Presenting investment opportunities in Slovakia was one of goals of the June 23-24 visit of then economy minister Tomáš Malatinský to the UK. After his resignation, Pavol Pavlis replaced him in the ministerial post on July 3.

“In regard to the orientation of British investments in Slovakia so far, mostly in the corporate and trade sphere, we are interested in their diversification and to strengthen the inflow of investments also into other sectors of Slovakia’s economy, especially fields with a higher extent of added value,” Malatinský said, as cited by the TASR newswire. “We see opportunities in financial services, development and research, progressive technologies focused on sectors of energy and environment protection or development of tourism.”

Representatives of SARIO accompanied the minister during his visit. During a round-table meeting organised by City of London, they met with representatives of over 20 British financial institutions to discuss opportunities in the Slovak market. It was followed by an investment seminar, Developing Your Business in the CEE, held in the headquarters of Squire Patton Boggs. It was attended by representatives of over 25 British companies, especially from the IT and R&D sectors, which wanted more detailed information about the Slovak investment environment, or which are already contemplating expanding their activities to Slovakia.

“With this event SARIO tries to establish new contacts with companies and to link up to successfully completed projects of the entry of British investors onto the Slovak market, as, for example, BoxPerfect, Amylum Slovakia and DS Smith,” said Dírer.

Dírer specified that compared with the previous year, British investors were especially interested in investing in the IT and shared services centres (SSCs) sectors. SARIO experts already attended a conference about the latter in London in November 2013, where they discussed with representatives of London-based SSCs their projects of expansions and relocations and informed the conference participants of the opportunities Slovakia offers in this sector.

Since 2002, SARIO has helped to bring about 18 investment projects from the UK with an aggregate volume of over €76 million and the creation of over 975 jobs. These investments flew especially into the sectors of manufacturing of rubber, plastics and metal products.

The most significant British investments in Slovakia include Tesco Stores Slovakia, employing 9,500 people; the Slovak Health Spa in Piešťany, employing over 1,200; and the security provider G4S, employing a similar number of people.

“GlaxoSmithKline, having been present so far as the export arm of the parent company, acquired a Slovak cosmetics and dental hygiene company this year, thus becoming another significant UK investor in the Slovak market,” said Repka. “BAE Systems are involved in major security and defence projects, having also expanded to the area of cyber security. Amec Nuclear is very active in nuclear decommissioning and waste management.”

According to Repka, while the list of major British investors has not changed significantly, they have seen the arrival of new medium-sized companies like BoxPerfect Slovakia, DS Smith Slovakia and AWS-Slovakia, employing from 50 to 100 people.

But the UK would also like to see more Slovak businesses investing in the UK.

“As Europe’s most open economy, Slovak investment in the UK is welcomed, valued and supported,” said Repka from the British Embassy. “UK Trade & Investment has recently become more active in promoting the benefits of investing in the UK to potential Slovak investors.”