ONE of the longest running news publications to have been started during the Habsburg monarchy was the Pressburger Zeitung (Bratislava Newspaper). The first issue was published on July 14, 1764, and printed in German - the second newspaper to be published in the language of the Austrian monarchy. 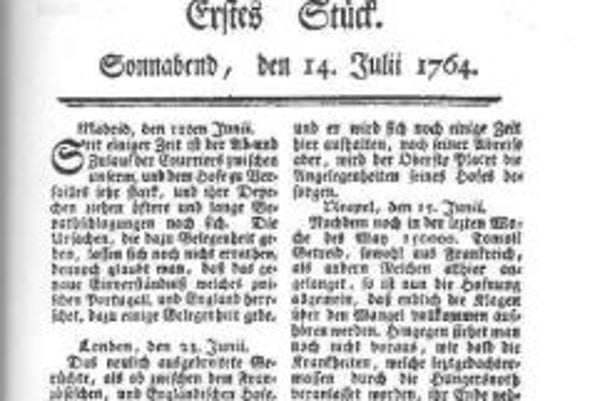 ONE of the longest running news publications to have been started during the Habsburg monarchy was the Pressburger Zeitung (Bratislava Newspaper). The first issue was published on July 14, 1764, and printed in German - the second newspaper to be published in the language of the Austrian monarchy.

The paper was published twice per week until 1880, and switched to twice per day until 1929, when its publication ceased amid pressure from the rise of fascism and the economic crisis. The first owner and publisher was Pressburg-based printer Ján Michal Landerer de Füskült (1726-1795). Bratislava was then called Pressburg in German, Poszony in Hungarian and Prešporok in Slovak - the three most common languages used in the city at that time.

Landerer’s family rose to prominence in Hungary for printing newspapers and magazines. In addition to the Pressburger Zeitung, they also owned printing plants in Košice and Pest, and a paper mill in Stará Turá. Empress Maria Theresa granted Landerer privilege in 1752 to print all books, and in 1764, he was allowed to publish documents from parliamentary sessions. The Landerer family owned the newspaper until 1812, the TASR newswire wrote.

The paper was to cover topical news from the whole of Europe, but mainly from Hungary. Thus, it became a unique witness to the French Revolution (1789), and Europe-wide revolutionary movements in 1848-49. It also focused on Slovak issues.

Landerer published the first issue of the Pressburger Zeitung with Karl Gottlieb Windisch, a businessman and later the city’s mayor. A great team gathered around the paper, composed of intellectuals from in and around Pressburg, inspired by French and German enlightenment and rationalism.

The editorial team was led by Landerer, Windisch and Ján Matej Korabinský from 1773. In 1784-86, young Daniel Tállayi was hired as an editor, who, despite his inexperience, was praised for his style and the high quality of his stories. However, tension arose amid disagreements with Landerer over editing the paper. Tállayi left to publish a rival paper, the Pressburger Merkur, but failed to obtain a license from the Royal Hungarian Governor’s Council in Buda.

The Pressburger Zeitung used to offer special supplements from which many individual magazines later evolved, like Der Freund der Tugend (Friend of Virtue), which focused on philosophical and ethical disputes, or Der Vernünftige Zeitvertreiber, about leisure activities, to name a few.

. Today, Pressburger Zeitung is a bi-monthly German-language magazine, with a summary in Slovak. Published since 2004, its circulation is 7,000 and it is also distributed in Austria, Germany and Switzerland. Its content focuses on political, economic and cultural events in Bratislava.

However, a monthly periodical and an online version is currently under consideration, publishers Axel Albrecht and Sven Rossbach told the SITA newswire. They added that the newspaper is one of the brands of Bratislava, as was proven at the Branding Bratislava event where it participated alongside the Bratislava rolls, and composers Eugen Suchoň and Ján Nepomuck Hummel.

Editor-in-chief Christoph Mandl noted that when the newspaper was a daily, it was published for 165 years without interruption.