Behind the Iron Curtain

A few days before Christmas people are queuing up in front of a grocery store for mandarins. Those who came early enough or know the seller might get the best pieces. Such queuing for food is one of those snapshots of communist regime Slovaks born before the 1980s remember. 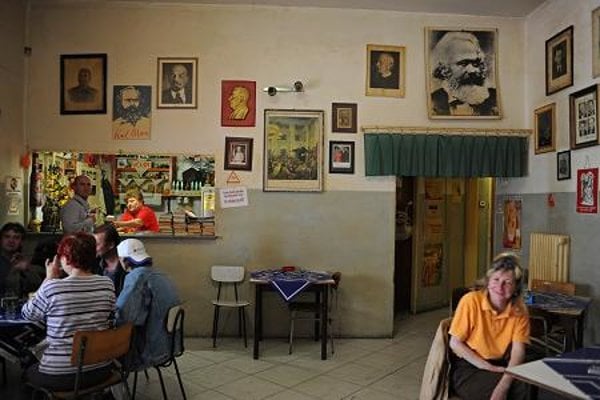 A few days before Christmas people are queuing up in front of a grocery store for mandarins. Those who came early enough or know the seller might get the best pieces. Such queuing for food is one of those snapshots of communist regime Slovaks born before the 1980s remember.

“Before there were few goods, the money was enough, today there is a surplus of goods, but people cannot buy them,” says Ján Juhász, a 58-year old teacher.

It wasn’t only the consumer goods that were limited during the communism, but also access to western culture and the chance to travel. Journeys to the West could only be made with official authorisation that was largely reserved for Communist Party members and their associates. Unpleasant as it was, not everything was bad. Everyone had a job, a flat or a house. Newlyweds could get an interest-free loan to begin their new lives together. Families could rent apartments from the state.

THE WHITE HOUSE IN KOŠICE

Košice owes much of its rapid growth in the 1980s to the construction of steelworks which provided jobs to thousands of people. This growth was celebrated by the communists and they began not only with the construction of apartments but also government buildings. The Regional Committee of the Communist Party of the Czechoslovak Socialist Republic was seated in a building that people called the White House. It resembles the seat of the American president in name only. The Košice version took about six years to build before it was opened in early 1985. Two years later a seven-metre tall statue of Lenin was added to the site.

“The White House had absolutely the highest incidence of comrades per square metre, and the building was 22,000 square metres,” said Milan Kolcun, a popular tourist guide. Comfort was ensured through a large meeting room with 639 seats. Many of the offices in the facility had their own secretaries, not to mention dining rooms and showers. The main rooms had air conditioning, although the average person on the street still had no idea such technologies existed.

After the Velvet Revolution in 1989, there were plans to turn the building into a children’s hospital, but this has yet to happen. Today, it is the largest office building in the eastern side of downtown, which is heavily populated by the national and municipal government buildings, as well as the city police dispatch centre. Today, the White House is open to everybody, but there isn’t much to see there.

Other typical images of the communist regime are the seemingly endless blocks of apartment buildings. Because of Košice’s sudden population growth, many were built in that city as well as in surrounding cities. Some of the first were built in 1950s and are situated at the Pasteurovo námestie (square) in the city district “Juh”. These blocks have three to five floors and no elevators. Another example, where an entire city was built during the periods of communism, is a town on the border with Ukraine, Čierna nad Tisou.

Based on a resolution to ensure the exchange of goods between the Soviet Union and Czechoslovakia, a rail transit centre was established in this young settlement and the area served mainly as a residence for railroad employees. First there were dormitories and later houses, and blocks of flats. The city’s cultural centre played a unique historical role as the site of negotiations surrounding the 1968 invasion of Czechoslovakia by the Warsaw Pact armies. Leonid Brezhnev and Alexander Dubček met in building.

“About two weeks before Brežnev came, we all were ordered to paint everything and plant flowers, the whole world had turned upside down,” recalls Jolana Diószegiová, now a pensioner. At the time she was a kindergarten teacher and they received an order to take all the children to the train station to wave as Brezhnev’s train passed by en route to Prague.

Decisions by communist leaders not only affected everyday life in the country, but also architecture. Several historical parts of cities were ordered to be demolished, and the typical colours of cities were dramatically changed in favour of industrial-style construction. Such renovations eventually proved fatal for one public swimming pool in Košice. Just a few years after it opened, officials decided to change the surrounding area. The resulting work seriously altered groundwater flow in the area and the infrastructure of the swimming pool building was permanently breached. The indoor pool was closed and the facility began to decay. In 2013, however, the aging, but unique building was renovated to become the Kunsthalle, a new place of culture (workshops, interviews with artists, international exhibitions).

While most places have transformed tremendously in the years since communism, others work to keep a bit of the old atmosphere. One such place is a pub near the centre of Košice. For visitors it is like a trip back in time. On the walls hang paintings of Czechoslovak and Slovak presidents, Soviet officials, and assorted uniforms and posters with slogans of Soviet Union. Prices are much lower than anywhere in the city centre. The regulars are ready to chat with visitors about the good and bad of communism. Taking pictures is only allowed for those indulging in a drink.