SUSPICIONS about World War II bombs on the bottom of the Danube River which led to suspending reconstruction work on the Old Bridge look to have been for good cause. Sonar inspection has revealed four suspicious objects close to the bridge and one of them resembles a mine. 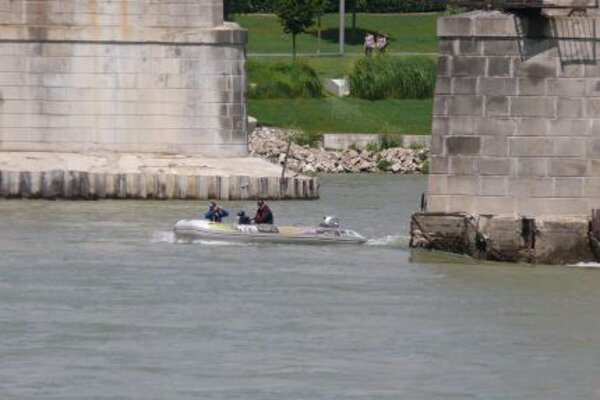 SUSPICIONS about World War II bombs on the bottom of the Danube River which led to suspending reconstruction work on the Old Bridge look to have been for good cause. Sonar inspection has revealed four suspicious objects close to the bridge and one of them resembles a mine.

The object that resembles a mine has been found on the bottom of the Danube River, around 30 metres from pillar five, which is closer to the side of Bratislava’s suburb of Petržalka and was planned to be preserved as part of the renovated structure.

“If it is this kind of mine, it responds on direct contact with the ship’s body,” head of investigation team Milan Lastovka told the Sme daily. “The radius of the blast wave could be 900 metres.”

Three more objects have been found near pillars three and four at a depth of two-three metres below the bottom of the river, Bratislava Mayor Milan Ftáčnik said on July 29, as quoted by the TASR newswire.

The City Council now plans to approach the Interior Ministry, asking it to ascertain whether the object resembling a mine represents a danger. As for the remaining three objects, the ministry should present within two weeks conditions under which construction work could be resumed, according to the SITA newswire.

Eurovia, the company overseeing the project, is meant to finish the work in August 2015. If it does not, EU, which covers 85 percent of the price totalling €58.8 million without VAT, may withdraw from the project, the Pravda daily reported. However, current issues should slow the progress just by month or two and EU funding is not endangered, according to Ftáčnik.

“So far it is not possible to talk about endangering of EU funds,” Ftáčnik said, as quoted by TASR. “We do not see it in this way.”

SUB: How did it get there?

Modern technology can not conclusively prove that object in the river is ammunition or not, according to Juraj Kadecký, a pyrotechnics expert from the Interior Ministry.

“The suspicious object has characteristics of a mine but we have not seen such mines here before,” Kadecký said, as quoted by TASR, adding that without seeing the object visually, experts can not be 100-percent sure.

It is hard to say how the ammunition, if it is indeed a mine, could have gotten there, Kadecký said. He does not presume that it is an unexploded bomb from bombing of Apollo refinery by US Air Force in 1944. He also denied that it could be result of German forces destroying bridge during their retreat from Bratislava in April 1945, the Pravda daily reported.