THE MEDIA have grilled third place presidential candidate Radoslav Procházka for unclear costs of his presidential campaign, but more recent reports suggest others might have underreported spending in their official reports too. 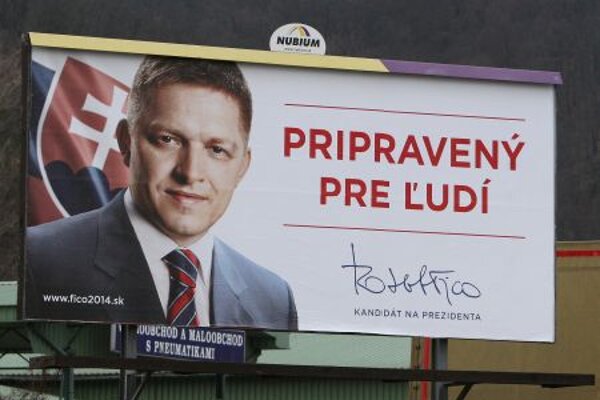 THE MEDIA have grilled third place presidential candidate Radoslav Procházka for unclear costs of his presidential campaign, but more recent reports suggest others might have underreported spending in their official reports too.

At least two other major presidential candidates, Prime Minister Robert Fico and Milan Kňažko, might have exceeded the official limits on the campaign, the Sme daily reported in its July 28 issue. This stems from the contradicting reports of the candidates and of the media who ran their advertising, which they have to submit to the Finance Ministry.

The limit for the official campaign (running two weeks before the election day), is set at €132,000. Candidates are obliged to report to the Finance Ministry how much they spent and how they used the money they declared to have spent.

Fico declared he had spent more than €60,000 prior to the first round of the election, and almost €70,000 on advertising in printed media. However, event just three major publishing houses, Petit Press, Perex, and Ringier Axel Springer, reported they have received over €145,000 from Fico altogether. This might not be a final sum, as some newspapers and magazines did not make their earnings from the presidential campaign available, Sme noted, adding that Fico’s ads also appeared in the outlets of the publishing houses Ecopress and Sport Express, whose numbers have not been made public.

The ministry argues it cannot publish the numbers without the consent of the publishing houses. Similarly to Ecopress and Sport Express, the amount spent at also 7 Plus and the publisher of the Trend weekly have not been published.

Smer insists that Fico did not exceed the campaign limits and that the party paid exactly what they declared in the report. It is the publishers who declared incorrect data in their reports, Ľubica Končalová, a Smer spokeswoman, told Sme.

“Some of them in their reports to the Finance Ministry declared the prices from their price lists, while in reality they officially charged lower prices, with discounts,” she said, as quoted by the daily.

Smer accused the Sme daily of lying about the prime minister, and now demands an apology.

Petit Press, the owner of Sme and The Slovak Spectator, claims to have sent a report with both the price-list prices and the actual sums from the invoice, and the sum that appeared on the ministry’s website is the actual charged sum rather than the one from the price list. Ringier claims to have published the sums that have actually been paid by the candidates, Sme wrote.

Kňažko possibly over the limit too

Fico is not the only one whose expenditure on campaign in the printed media differs from the figures declared by the media. Similarly, Kňažko does not have his figures match those of the publishing houses. While he declared to have spent €46,400 in printed media, the figures of Petit Press, Perex, and Ringier Axel Springer make up €56,000 altogether, according to Sme. Additionally, Kňažko also advertised in outlets of the 7 Plus publishing house, who did not make their numbers public.

There is a fine for exceeding the official campaign limits, amounting to 10 times the sum the candidate spent over the limit. In Fico’s case, this could mean up to €150,000, for Kňažko it would be around €90,000.

The fine however can be imposed only two months after the declarations are delivered to the ministry. Kňažko and Fico delivered their reports by the end of April, Sme reported, meaning they are unable to face penalties. Kňažko in his reaction for Sme admitted he was late with the report and was fined €1,000 for the delay.

Transparency International Slovensko (TIS) president Gabriel Šípoš alleges the ministry does not check the reports at all. “It’s not that hard to compare the numbers and act,” he told Sme.

The ministry maintains that it acts based on the law and if it finds the limit was exceeded, it fines the candidate in question.