THE NEWLY established party of Radoslav Procházka, Sieť, remains the second most popular party following the ruling party of Prime Minister Robert Fico, Smer, according to a recent poll by the Polis polling agency. 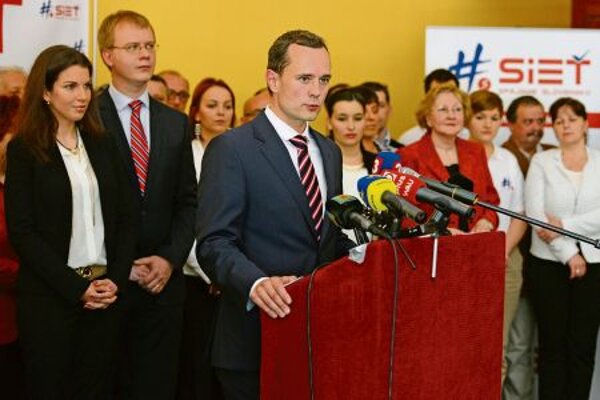 THE NEWLY established party of Radoslav Procházka, Sieť, remains the second most popular party following the ruling party of Prime Minister Robert Fico, Smer, according to a recent poll by the Polis polling agency.

Nevertheless, Sieť, which collected 16.4 percent support, fell little less than 1 percent short of its June results when the party scored 17.2 percent, according to a 1,128-respondent poll conducted for the SITA newswire between July 18 and 22. Some 60 percent of respondents said they would vote in elections.

The recent poll however does not show how the public might react to a recording published anonymously on the internet on July 22 that pertained to earlier claims by Igor Matovič, the leader of the opposition Ordinary People and Independent Personalities (OĽaNO), that Procházka of Sieť attempted to purchase advertising for his third place finishing presidential campaign from Matovič’s family-owned company, Regionpress, off the books.

“The agency collected the data before publishing the recording of parts of conversation between Igor Matovič and Radoslav Procházka, which means that the content of the conversation did not impact the eventual support for Sieť and OĽaNO,” Polis Slovakia head Ján Baránek told SITA.

The rising popularity of Procházka, who entered politics through the door of one of the most conservative parties, the Christian Democratic Movement (KDH), has been an interesting development on the otherwise long stagnant centre-right political scene. In recent weeks, much of the media has intensively focused on his presidential campaign spending, which according to observers was more lavish than Procházka officially admitted.

Smer picked 35.8 percent in the July poll of Polis, slightly more than in June when the party picked 35.3 percent in the Polis poll, a 1.1 percentage point drop in comparison with the Polis poll from May. However, compared to the party’s performance in March, when it scored 41.5 percent, Smer’s approval ratings are indicating declining, which has made party leaders edgy.

Most-Híd with 8.3 percent comes in next, followed by the KDH with 7.7 percent of the responses in the poll. The ethnic Party of Hungarian Community (SMK) would also make it to parliament with 6 percent, followed by OĽaNO with 5.5 percent.

The once dominant Slovak Democratic and Christian Union (SDKÚ), the former party of one-time prime minister Iveta Radičová, would have not made it to parliament if the elections were held in mid July. Richard Sulík’s Freedom and Solidarity (SaS) and Daniel Lipšic’s NOVA party would have remained outside of the parliament as well.

SDKÚ has been trying to regain its former strength since the last parliamentary elections. Earlier this year the two-time prime minister Mikuláš Dzurinda and his right-hand man Ivan Mikloš quit the party they founded more than a decade ago. Dzurinda, who defeated the controversial prime minister Vladimír Mečiar in 1998, and Mikloš, who introduced the internationally acclaimed 19-percent flat tax, left the SDKÚ due to what they called the failure of the new leadership to rejuvenate what was once the country’s strongest right-wing party. They also cited dissatisfaction with the course the party has taken since 2012, when Pavol Frešo took over from Dzurinda.