FOOD producers in Slovakia warn against dangers that can follow Russia’s ban on some food imports from Ukraine in late July, including flooding the market with cheap Ukrainian products and a subsequent threat to jobs in food production. The Agriculture Ministry however says there is no reason to fear since the food will first need to meet European Union requirements. 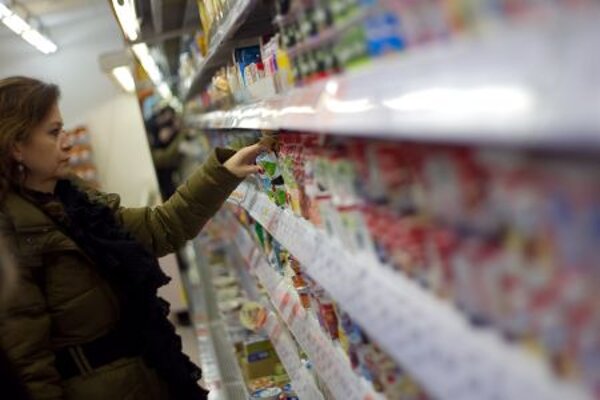 Associations representing food producers are afraid that the market will be flooded with cheap Ukrainian food. (Source: SME)
Font size:A-|A+0

FOOD producers in Slovakia warn against dangers that can follow Russia’s ban on some food imports from Ukraine in late July, including flooding the market with cheap Ukrainian products and a subsequent threat to jobs in food production. The Agriculture Ministry however says there is no reason to fear since the food will first need to meet European Union requirements.

Russia banned the exports of milk, milk products and canned food in the end of June. Since most of Ukraine’s exports go to Russia, the food producers are afraid that the country will now try to find new markets to compensate for the loss, mostly in the EU.

“The fact remains that with a high level of consumer patriotism of people from western European countries it can be expected they will not buy much of Ukrainian goods,” Stanislav Nemec, spokesperson for the Slovak Agricultural and Food Chamber (SPPK), told The Slovak Spectator. “Most of the Ukrainian food will therefore end in central European countries, including Slovakia.”

In 2013, Ukraine exported food worth more than €3.2 billion to the EU. This included meat products, poultry products, fruit and vegetables, canned food, fats and oils, drinks, alcohol and wines, said Daniel Poturnay, president of the Food Chamber of Slovakia (PKS).

Both PKS and SPPK have already voiced concerns when the EU eased some restrictions on Ukrainian imports in March. The eased regime is currently set to end in November. It is, however, possible that the EU will extend the help, Nemec said.

Despite the outcry from domestic producers, the Agriculture Ministry does not expect that the market will be flooded with cheap Ukrainian food. Though the EU has eased the restrictions and set some quotas on imports from Ukraine, the imported products have to meet the hygienic criteria of the EU. Moreover, since for example milk belongs to the more sensitive products in the EU, as well as in Slovakia, there will be full custom fees, meaning the Ukrainian milk will not be competitive, ministry spokeswoman Radka Kulaviaková told The Slovak Spectator.

Canned vegetables, meat and fish will also have to meet veterinary and hygienic criteria.

“Since the Ukrainian canned food does not meet health norms in Russia, it can be expected that it will neither meet norms of the EU,” Kulaviaková said.

Moreover, if the producers in the EU have difficulties because of the Ukrainian imports, the EU can decide to abolish the custom preferences, which means that the Ukrainian products will not be allowed to the EU market, Kulaviaková stressed.

Ľubomír Drahovský, an analyst with the Terno market research agency, also considers the fears of food producers “premature painting of black colour on the market”. According to him, food produced in Slovakia meets high quality criteria. The producers declare they produce quality food from good-quality and identifiable ingredients. The ingredients of Ukrainian food cannot be identified so easily, the analyst stressed.

Except for increased imports of cheap Ukrainian food, the associations representing food producers fear the loss of jobs in production.

“The increase in volumes of food imports from Ukraine and their placement on Slovak counters can result in further drop in employment in the whole agro-food sector,” Poturnay told The Slovak Spectator.

According to Nemec, it is hard to prevent this situation. To keep Slovak food in the market it is necessary to point to quality aspects of Slovak products, address the consumers and stress all socio-economic links to selling domestic products, like employment.

“The low competitiveness of Slovaks, however, results in losing their consumer patriotism and tendency to quality, and in many cases they prefer mostly low prices when buying food,” Nemec said.

Though some people prioritise price over quality, which means they may buy Ukrainian food rather than the Slovak one, this will only be a small percentage that will not threaten the jobs in food production, Drahovský explained.

“I assume it [the food imports from Ukraine] will motivate food producers in Slovakia to continue in the way towards quality and the most acceptable price for consumer,” Drahovský said.