SEVERAL construction companies that are delayed in their highway construction work in Slovakia argue that the delays come because of bad weather and are now asking for extended deadlines. Meanwhile, Construction Minister Ján Počiatek insists that 2019 will be the year Bratislava and Košice should be joined by the D1 highway. 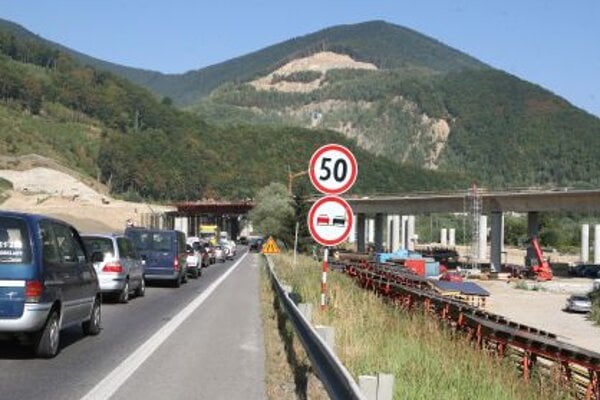 SEVERAL construction companies that are delayed in their highway construction work in Slovakia argue that the delays come because of bad weather and are now asking for extended deadlines. Meanwhile, Construction Minister Ján Počiatek insists that 2019 will be the year Bratislava and Košice should be joined by the D1 highway.

Váhostav-SK has asked for extension of the construction of the D1 section between Dubná Skala and Turany close to Martin due to May floods, the TASR newswire reported on July 25. Flood water underwashed a bridge close to Dubná Skala. According to original plans, Váhostav-SK should have completed the 16.4 kilometres of the €137.7 million project by this December. The National Highway Company (NDS) is assessing the request.

However, NDS is also already dealing with a request of Váhostav-SK to postpone the deadline for a D1 stretch close to Levoča. Váhostav-SK is building the first section of nine kilometres between Jánovce and Jablonov in the consortium with Bögl and Krýsl for €59.9 million. The highway should have been completed in July. Again Váhostav-SK ascribes the postponement to unfavourable weather conditions.

“Only the analysis of damages caused by rainy weather, following floods and their impact on fulfilment of deadlines can last several weeks,” Tomáš Halán, Váhostav-SK’s spokesman told TASR.

However, NDS has seen other explanations for the delayed construction near Levoča, according to the Sme daily. Váhostav-SK had problems paying subcontractors, who then were not willing to send workers and machines to the construction site. NDS might see this as the reason behind the delay near Martin, too.

NDS is not speaking about possible fines for delayed highway construction for now. Former investment director at NDS Juraj Čermák indicated in the past that if Váhostav-SK is late because of its bad financial discipline, the state should fine it, Sme wrote. He put Inžinierske Stavby, which was fined €7 million for the unjustified four-month delay when building the D1 stretch between Jánovce and Mengusovce, as an example. Inžinierske Stavby, instead of renting expensive construction equipment, wanted to use its own, however, these were busy when it needed them on the highway construction site.

In the past NDS has complied with a similar request. The deadline for completion of the D1 stretch between Fričovce and Svinia was postponed by 142 days to July 2015 due to bad weather and landslides. This stretch is being built by the consortium of Doprastav and Strabag for €114.6 million.

The latest tenders for highway construction have brought prices below the officially estimated costs, meaning that for construction companies these are loss-making projects. For example, Eurovia is building the second section of the D1 stretch between Jánovce and Jablonov of 9.5 kilometres for €126.3 million, 46.6 percent of the price estimated by the state at €270 million. Róbert Šinály, general director of Eurovia SK explained for the Hospodárske Noviny economic daily on July 7 that at that time when they wanted to get an order, they had to decide whether to offer a price generating no profit or to lay off about 100 people.

“In the end we decided that for us it is more important to keep employment,” said Šinály.

Other companies with loss-making highway construction projects are Doprastav, which is just undergoing restructuring process, and Váhostav-SK. Doprastav is building two stretches for lower than estimated price (the 11.3 km Hričovské Podhradie-Lietavská Lúčka and the 11.2 km Fričovce-Svinia). In these cases the prices were 87.6 and 53.7 percent of the expected price. Váhostav-SK has three such projects (the 16.4 km Dubná Skala-Turany, the 9 km Jánovce-Jablonov, first section, and the 15.3 km Hubová-Ivachnová). Here the prices were 41.1, 63.3 and 48.8 percent of the estimated price. The latest such project is the construction of the D1 tunnel Višňové, according to Hospodárske Noviny. Here Dúha in consortium with Italian Salini Impreglio offered to build the 13.5 km stretch including the 8-km tunnel for €409.8 million or 45.5 percent of the expected price of €899 million.

Experts see the then bad situation on the construction market behind the willingness of construction companies to go into loss-making projects.

“The crisis caused that supply on the market was much higher than demand,” Ľubomír Palčák of the Research Institute of Transport said as cited by Hospodárske Noviny.

Companies planned to cover holes in their budgets from other sources and projects. However, this has not happened as the construction market did not revitalise as they originally expected.

“It has shown that companies, which went below the price at that time, now pay the price for this,” said Palčák.

“During years 2010 and 2011 the state was preparing a minimum amount of [construction] tenders, thus we had to focus on as a low price as possible,” Halán of Váhostav-SK told Hospodárske Noviny.

Especially the stretch Dubná Skala-Turany is problematic for Váhostav-SK when it was not able to pay to its subcontractors on time. Here also Palčák sees the biggest problem of cheap highways.

“Small sub-contracting firms are paying for this,” Palčák told Hospodárske Noviny. He estimates that the competition environment can reduce the price by 20-30 percent. “When it is more, then it starts being suspicious,” he said.