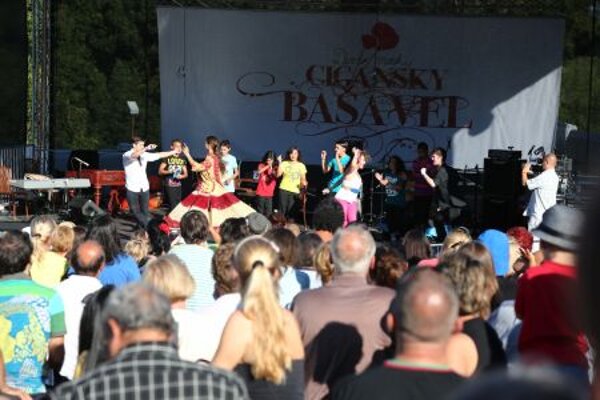 Bratislava
ROMA EVENT/CHARITY: Mini-Bashavel – The feast called Cigánsky (Gipsy) Bashavel, simulating the traditional Roma feast, while also presenting the talents of Roma children trained in a summer workshop, will this year feature also a mini-version that offers a piano concert of Norbert Daniš and Anabela Patkolová, Roma theatre DIK from Čičava directed by Naďa Uherová, traditional cimbalom music led by Barborka Botošová, workshop of Gipsy dances by CreDance, Czech film about Roma “The Way Out”, several accompanying events, as well as a competition in beach volleyball, the proceeds of which (registration for teams of 2-6 costs €40) go for the education of young, talented Roma.
Starts: Aug 9, 15:00 (17:30 dance workshop, 21:00 the film); Magio beach at Tyršovo Nábrežie on the Petržalka side of the Danube. Admission: voluntary. More info: www.divemaky.sk; www.citylife.sk.

Bratislava
CLASSICAL MUSIC/CHARITY: East Sussex Youth Orchestra – This UK orchestra will celebrate its 35th anniversary with a concert in Bratislava, performing works of Josef Suk, Richard Strauss and Gustav Mahler as conducted by Colin Metters and accompanied by Sam Pearce on French horn. The proceeds collected will go to the publishing of works by Slovak writers (Martin Rázus, Božena Slančíková-Timrava) about the World War I.
Starts: Aug 4, 19:00; concert studio of the Slovak Radio, Mýtna 1. Admission: free (tickets must be, however, booked via www.ticketportal.sk or jan@juras.sk, (0905/716-851).

Bratislava
EXHIBITION: Také slovenské / So Slovak – The exhibition presents the traditional and the contemporary features in the art of tinkery. The Ferdinand Martinengo Society strives to revive the traditional Slovak craft, tinkery. At the exhibition’s opening, the society gave the work of Slovak tinkers called Pain in the Heart (Bolesť v srdci) to ambassadors of Bosnia and Herzegovina, Bulgaria and Serbia, countries stricken by damaging floods.
Open: weekdays, 10:00-16:00 until Aug 15; Justi’s Hall of the Primate’s Palace, Primaciálne Square 1. More info: www.bkis.sk.

Bratislava
EXHIBITION: “Tancovala by som, bosá som...” / “I would Love to Dance, But I Am Barefoot” is an exhibition of the centre for Folk Art Production, ÚĽUV, offering more than 250 exhibits of traditional shoes, slippers and boots from three different museums.
Open: Tue-Fri 12:00-18:00, Sat 10:00-14:00 Until Sep 13; ÚĽUV Gallery, Obchodná 64. Admission: free. More info: www.uluv.sk.

Banská Štiavnica
FILM FESTIVAL: 4 živly / Four Elements – The “summer film seminar” focuses on the various forms of power – as connected to the year 2014, full of political elections in Slovakia. Feature, documentary and animated films will try to explore the phenomenon of the use and abuse of power as seen by filmmakers, reviewers, theoreticians and lecturers.
Starts: Aug 6-10; various sites in Banská Štiavnica. Admission: €18-€21 for the whole festival. More info: www.4zivly.sk.

Košice
MULTI-GENRE FESTIVAL: Leto v Parku / Summer in the Park – This year, the multi-genre festival returns to the park surrounding the Kasárne Kulturpark barracks, with the first concert taking place on Saturday and presenting Slovak rap-rock band Lavagance with the Roma band Sendreiovci-Kokavakere Lavutara and dance ensemble Outbreak. On Sunday, children will be offered a theatre play, as well as workshops and readings, while adults can come in the evening to watch the theatre improvisation group 3T.
Starts: Aug 9-10; Kasárne Kulturpark, Kukučínova 2. Admission: free. More info: www.letovparku.