THE 70TH anniversary of the Roma Holocaust saw a number of events taking place in Slovakia earlier this month to commemorate the tragic events of the Second World War that cost many Slovak Roma their lives. Even so, one can hardly say that the tradition of remembering the Roma Holocaust is well established in Slovakia. 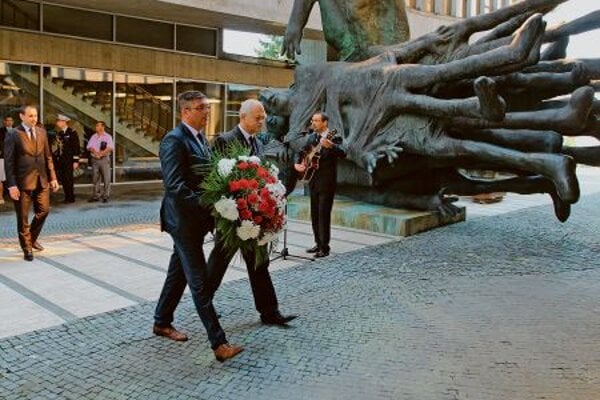 THE 70TH anniversary of the Roma Holocaust saw a number of events taking place in Slovakia earlier this month to commemorate the tragic events of the Second World War that cost many Slovak Roma their lives. Even so, one can hardly say that the tradition of remembering the Roma Holocaust is well established in Slovakia.

When the series of commemorative events started in 2005 in Banská Bystrica, the media was very cautious at the time and did not do any extensive reporting of the event. The situation has since changed for the better, said Arne Mann, an ethnographer from the Institute of Ethnology of the Slovak Academy of Sciences, who focuses on the Roma Holocaust in his research work and who co-organises the events.

“The media definitely pay much more attention [to the Roma Holocaust] now and I think that many have realised that yes, we need to talk about it and we need to write about it,” Mann told The Slovak Spectator.

This year in Slovakia, memorial events to this end were held in early August, as August 2 is the official day of remembrance for Roma victims of the Holocaust. On the night of August 2, 1944, around 2,900 Roma and Sinti were killed in the gas chambers of the Auschwitz-Birkenau death camp. Altogether, the number of Roma from around Europe who died during the war is estimated at 300,000-500,000.

A remembrance mass was held in Bratislava’s St Martin’s Cathedral and wreaths were laid in Dunajská Streda, with memorial events also taking place in Banská Bystrica and Hanušovce nad Topľou. In the latter, wreaths were laid at the local train station to mark the town’s role in the Roma Holocaust. In 1942, a labour camp for so-called asocial people was established there and mainly Roma were transported to work there on the construction of the Prešov-Strážske railway.

“Remembering the pointless liquidation of the Roma does have a sense, for the mutual respect, from the part of both Roma and the majority, as well as for our future cohabitation,” said Peter Pollák, the government proxy for Roma communities, as quoted by the SITA newswire.

Zuzana Kumanová, an ethnographer from the In Minorita non-governmental organisation, agrees that remembering the Roma Holocaust is important for preserving the memory of those who died or were persecuted because of their ethnicity.

“Another thing is to learn from it and pay attention, because these features have shown up in the past and this happened even before the events that led to the genocide and persecutions,” Kumanová told The Slovak Spectator. She mentioned the stereotype of the Roma as asocial people who avoided work, which helped fuel the wartime persecutions and the many laws directed against the Roma.

The stereotype of work-shy Roma is widespread even today, when many see the Roma as people who leach on the system, shy away from work and do not care about improving their environment and their life.
“These are not the Roma, it is not something that represents the Roma culture,” Kumanová said.

The fact that the Roma have continued to face harsh discrimination in Slovakia (as well as elsewhere in Europe) since the war has made it harder to document and commemorate the Roma who died in the Holocaust.

There has been a stigma on the Roma Holocaust, quite the same as there was for Jews, and they preferred forgetting it rather than remembering. Many Jews who were born after the war were unaware of the fact that their parents had been in concentration camps, Mann noted.

What was different for the Jews, however, was that there were many intellectuals among them who realised the need to talk and write about what happened. Soon enough, various research organisations emerged and began focusing on the Holocaust.

“There was, however, nobody [to do the same] among the Roma; plus the topic was taboo,” Mann told The Slovak Spectator. And not just the Roma Holocaust, but also the Roma as such were not even recognised as an ethnic group, but rather as a social group, Mann noted. It was not until 1988 that a research work was published on the Roma, but the wartime events were omitted, with the argument that the Roma did not suffer that much during the war, Mann said.

With the fall of the communist regime in Slovakia and beyond, the view of the Roma Holocaust shifted. In the early 1990s, Polish Roma came up with the idea to commemorate the Roma Holocaust on a specific day, and a research centre focusing on the Roma was established in Auschwitz. Other organisations followed suit.

In Slovakia, Arne Mann initiated the first commemorative event in 1990 in Dúbravy pri Detve.
Later, in 2005, the Ma bisteren! (Roma word for Don’t forget!) project was launched, which resulted in the unveiling of seven memorials around Slovakia.

Kumanová believes the topic of the Roma Holocaust has made it into the public’s awareness in the past 20 years, with mainly experts and NGOs leading the debate, though the historiography still lags behind.

“Children in primary schools learn only minimal information about the Roma, the second biggest national minority, and even that information is stereotype-driven,” Kumanová said, adding that the same could be said about other minorities and the multi-ethnic character of Slovakia as such.

Roma and their history

As for the Roma alone, they received neither reconciliation nor recognition of their Holocaust history after the war.

“The people who survived had to adjust and live their lives,” Kumanová said. “They did not have the time to look back.”

As a result, the Roma only recounted their stories at home, or simply did not discuss them at all. Therefore, the Roma Holocaust is a new history for the Roma, as it is for the non-Roma, and it is as if it needs to be re-introduced into their historical memory.

For the Roma, this is part of their ethnic emancipation processes, according to Kumanová. The projects raising awareness about the Roma were launched about a decade ago, and since then many young people have become familiar with the topic. When the 70th anniversary of the Roma Holocaust was marked in Auschwitz this year, about 1,000 young people attended the events and participated in workshops for young activists and artists, generally aimed at nurturing the cultural identity of the Roma.